Jesuit Holds Off Dunedin For 6A State Championship 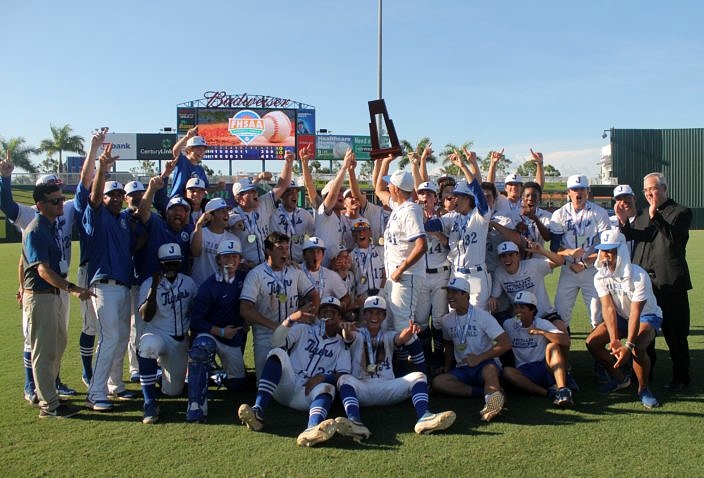 Ever since Jesuit’s season ended in the playoffs a year ago, manager Miguel Menendez felt very good about what his team was capable of doing this year and for years ahead. The fact that it all started with his guys reading books is something less than ordinary for a baseball team, but that was still what started it all.

Coach Menendez is a big fan of motivational literature, and he shared many such books with his players. Those guys gobbled up the material, they pulled out passages that inspired them and motivated them the right way, and they used that to help shape them into the student-athletes they have now become.

Saturday afternoon that mental fortitude played a huge part in the team’s performance, as the players weathered the storm in a tough battle against the Dunedin Falcons, in Saturday’s 6A state championship at Hammond Stadium in Fort Myers. Jesuit fell behind early but fought its way back and held on for a 4-3 victory that earns the program’s fifth state title.

“It was a dogfight, which you expect in a state championship game,” Menendez said. “I think the nerves got to us early, but we settled in and guys kept playing. That was just part of the journey. This was what these guys wanted to do and where these guys wanted to be, and I am just happy for them. I am excited, obviously, and everybody loves to win. I won as a player, and I wanted these guys to experience what they just got to experience.”

The game featured a rematch of the 2017 state semifinals, while also producing a match up between two clubs from the same region in the Tampa Bay area. Dunedin reached the title game on a nine-game winning streak, with a battle-tested, veteran team that proved a worthy opponent every step of the way. This season the Falcons rallied around student manager Tyler Nolan, who overcame a brain tumor and cancer to be back with the team right through on Saturday.

“For me, we were champions before,” Dunedin manager Ron Sexton said. “The biggest victory that we had this year is Tyler Nolan. I feel like we won a state title before we got here. We’ve rallied around him and we wanted him to be here with us today.”

Dunedin benefited off a throwing error to grab the lead right away with a run in the top of the first inning. After Jesuit starter Justin Clark retired the first two batters, Tristan Morton was hit by a pitch and Lake Fisher worked a walk to put the pressure on. An infield grounder off the bat of Jonathan Hubbard resulted in a throwing error that allowed courtesy runner Connor Russell to race home for the 1-0 advantage. 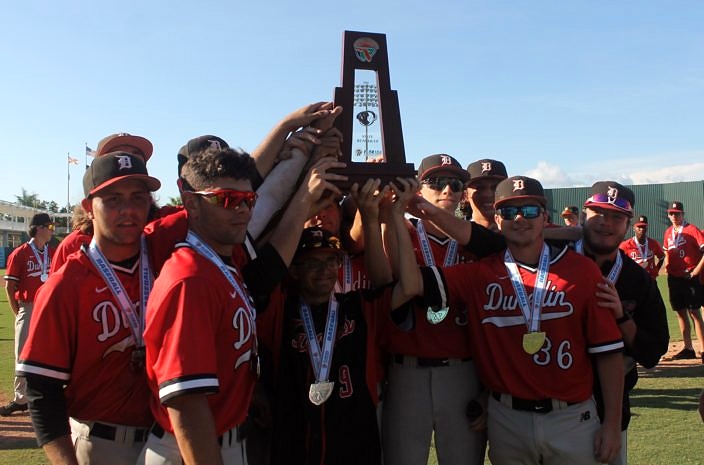 The Dunedin seniors and team “Spirit Animal” Tyler Nolan with the runners-up trophy to recognize the number two team out of seventy-nine Class 6A teams.

“We’re a horse that loves to run out in front; we’ve done it very well this year,” Sexton said. “We were able to tax that pitcher and extend that inning when he felt like he had one foot in the dugout, so that was nice.”

Held scoreless for four innings by Dunedin starter Dominic Pineiro, the Tigers attacked left-handed reliever Dominic Baratta to get on the scoreboard in the bottom of the fifth. Bradke Lohry and Nick Rodriguez both led off by drawing a walk, and a fielder’s choice to third advanced them both into scoring position. Left fielder BJ Graham then sent a slow roller up the middle and raced up the sideline to beat the throw for an RBI single that tied the game with Jesuit’s first run.

“My approach actually changed today, because he wanted to keep throwing to me outside a lot,” Graham admitted. “I was able to drive the ball. Guys don’t normally throw inside to me because I am a pull hitter, so they tried to stay away. But obviously I’ve been driving the ball that way. It looks like it has been easy, but it is actually very hard. My whole life I have been a pull hitter, but I stayed in the cage and worked the tee outside. Living away, that really helped my game.”

With momentum in their favor, the Tigers (27-5) kept swinging to grab the lead. Cole Russo bounced an RBI single to right and Henry Politz followed with a base hit to right that increased it to a 3-1 lead.

“I know it sounds crazy, but I was actually happy that they switched to a lefty. We’ve faced a lefty in every playoff game so far, so it was old hat for us,” Menendez said. “We found a way to get a couple of big base hits there.” 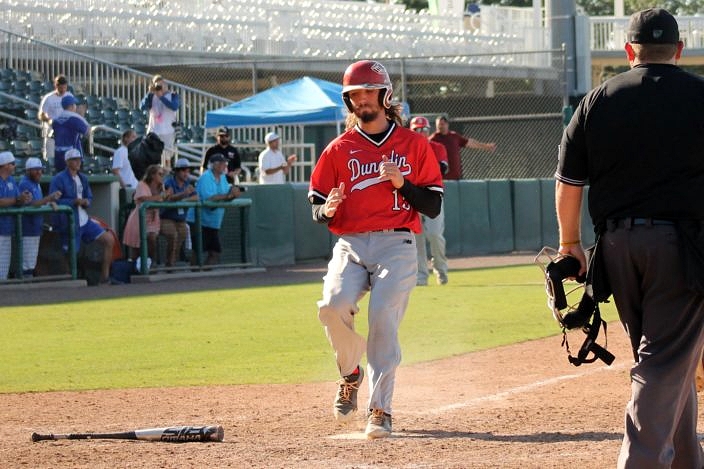 Ray Sass scores the final score of the game that pulled Dunedin within a run of tying things back up.

Dunedin (23-9) answered right back with a run in the sixth. Jaydee Marks sent a liner to left, Marcus Brodil lined a single past third base and Tyler Vogel connected for a base hit deep to the shortstop to load the bases. A wild pitch then presented the window of opportunity Marks needed to race home and pull his team within a run of evening things back up again.

“One of my favorite things about this team is our resilience,” senior captain Ray Sass said. “We never feel like we are out of a game. We can be down ten runs but will be in the dugout talking about getting three an inning and to keep fighting. We never really feel out of a game, and even there where we were down two we were in the dugouts saying, ‘let’s go get some runs. We’ve done it before; let’s do it again’. Our resilience has been off the charts this year. It’s one of my favorite things playing with everybody on this team.”

The Tigers responded to get that run right back in the bottom of the sixth, tallying their final score for the deciding run. Jonathan Shoop got it going with a single past first, and two batters later Rodriguez sent a drive deep into the left field corner for an RBI double that put Jesuit back up by two runs.

“Every time I get up I try not to do too much. I try to do what I am capable of doing and not doing more than I can do,” said Rodriguez, who went from starting the year on the junior varsity team to driving in the winning run for a state title. “Somehow the ball got in between third base and the third base line. It’s crazy to think that I didn’t even start the year on the team and now I had the winning RBI in the state championship game.” 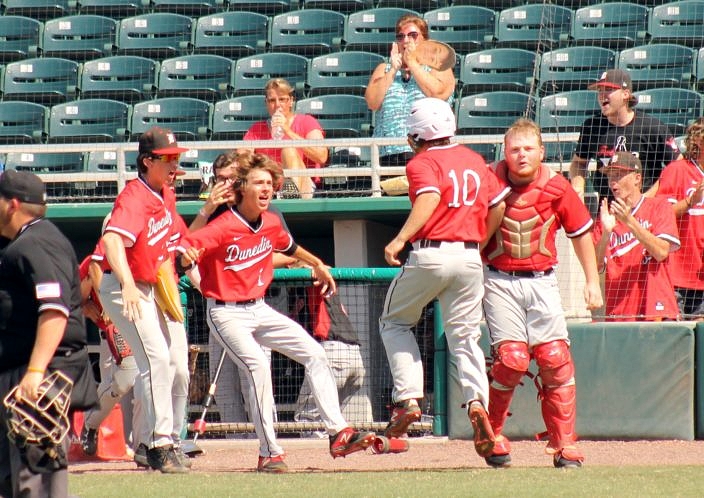 The Falcons celebrate after Connor Russell scored to give them the lead in the top of the first inning.

Dunedin refused to lie down and accept defeat quietly. Down to their final three outs, the Falcons kept swinging away to battle back. Sass started off the bottom of the seventh with a double to left that prompted another call to the bullpen to chase reliever Josh Mallitz for closer Turner Thompson. Morton got the ball on the ground to the right side to do his job and push Sass to third on the 4-3 ground out, and Fisher supplied a fly ball deep to left for a sac-fly RBI that plated Sass with the final run of the day.

Thompson got the next batter swinging to close out the contest and preserve the hard-earned championship victory.

“Every time our guys were getting flustered I just kept telling them that if it was always going to be so easy it would not be as much fun,” Menendez said. “I’m as competitive as it comes, but at the end of the day it is still a baseball game. I respect those guys at Dunedin and I hate that one of the teams had to lose. Trust me, I’m happy we won. But I hate that the other side has to experience that feeling of losing. It doesn’t take away what anybody does, win or lose. But I wanted my guys to experience this after they worked so hard. I’m just proud of what they were able to handle and do.”

Jesuit started the season with a bang by traveling to South Florida for the HSBN First Pitch Classic, where the Tigers defeated three of the state’s top teams in Westminster Christian, Monsignor Pace and North Broward Prep. After that strong start the team knew it had something good going on for this season, and at least one member of the Jesuit family needed no further convincing that this year was going to end exactly how it did.

“My son, Jackson, told us that we were going to win the state championship this year after we started like that. I have to give him the credit because he was the first one to call it,” Menendez said. “Obviously when you open up the season like that, beating Westminster Christian, coming back for eight runs to beat Monsignor Pace, 9-8, and then to beat a really good North Broward Prep team to go 3-0, we felt that this team had a chance to do something special. But I had a really good feel for this team all along.” 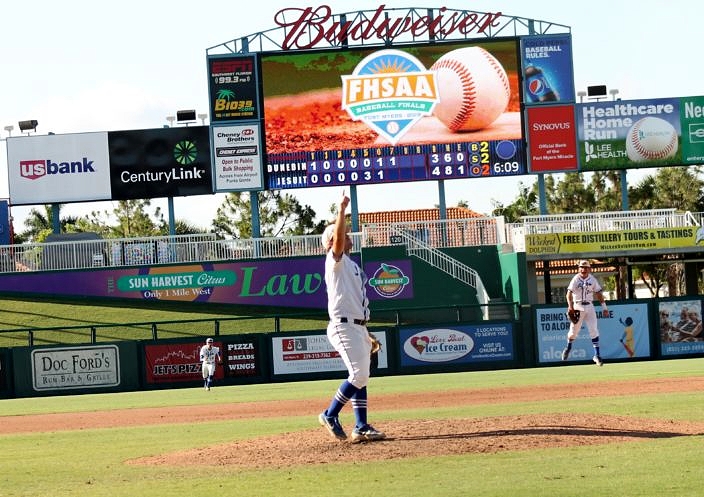 Turner Thompson points to the sky in celebration after recording the final out to win the championship.