Quinn Goes The Distance To Send Berkeley Prep To 3A Finals 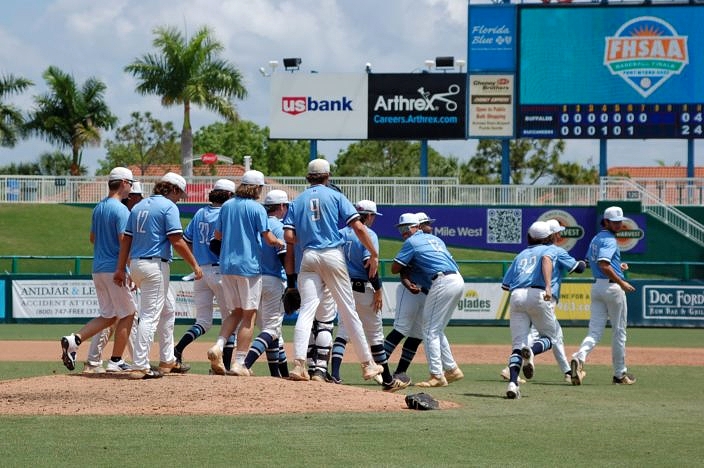 Berkeley Prep mobs JT Quinn on the mound after he finishes off a complete game to send the Buccaneers to the state championship.

Berkeley Prep leaned on their ace Monday in the 3A state semifinals and JT Quinn delivered with a complete-game shutout of The Villages Charter Buffalo.

The Villages also threw their best arm, senior Carter Parks, but the Buccaneers got to him for a run in the fourth and one in the sixth to secure the 2-0 victory.

“I thought coming in that it was going to be a low-scoring game,” Berkeley manager Ricahrd Warren said. “Everything we heard about The Villages was that they were tough, hard-nosed and could really pitch it. The Parks kid was really good and gave us everything that we could handle. We just happened to be a couple runs better today.”

Parks matched Quinn, an Ole Miss commit and projected third-round pick or higher in the upcoming MLB draft, for most of the night. He threw 5 2/3 innings and struck out four while giving up just four hits and two walks. In comparison, Quinn struck out five and walked six. That walk number is a bit concerning, but as a true ace does, Quinn worked out of each jam without harm.

His pitch count, however, was a problem going into the final inning of the game. Approaching the century mark quickly by the end of the sixth, Quinn had to finish things off with less than 10 pitches to spare before being pulled at 105. Fortunately for Berkeley Prep, he reached the final batter before hitting that mark and was able to finish things off with a strikeout.

“I was just thinking a lot,” Quinn said of the six walks. “At the end of the day, I tried to fight through it and just throw down the middle because I knew my defense would really work for me. That’s been the case all year. That was big for me to settle in.” 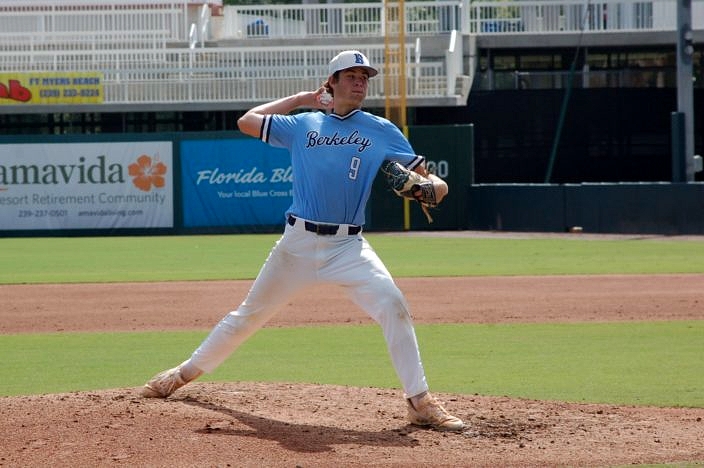 JT Quinn struck out five and limited The Villages to zero runs despite walking six.

Owen McElfatrick provided the first run of the game in the fourth on a single that crept past the first baseman into right field. Anthony Castillo scored, and that’s all the offense that would lead to any real production until the sixth. Gunnett Carlson tripled to score McElfatrick from second and give Quinn a little cushion heading into the final frame.

“That was huge,” he said. “Like I’ve been saying, nothing’s been pretty this game, but we found a way to fight for each other and really back each other up. And getting that insurance run was really big for me going into the seventh.”

The Villages biggest threat came in the sixth. Quinn walked Anthony Kradzinski and Nathan Budill, a junior varsity player called up for the playoffs, came in to pinch run. He advanced to second with only one out on the board, but made a mistake taking off on a Lincoln Gagne ground ball to shortstop. Berkeley’s Cade Kurland made a heads-up play to get the tag out at third, and Quinn got out of things unscathed.

With the win, Berkeley advances to the state finals against the reigning 3A champions, North Broward Prep. It’s the first time since 2014 that the Buccaneers have been to the state championship, but the team is more than confident in its ability to win it all on Tuesday. Several members of the team made a run to the state championship with Berkeley’s football team, and the loss has served as a bit of a motivator to take every moment seriously during these playoffs. 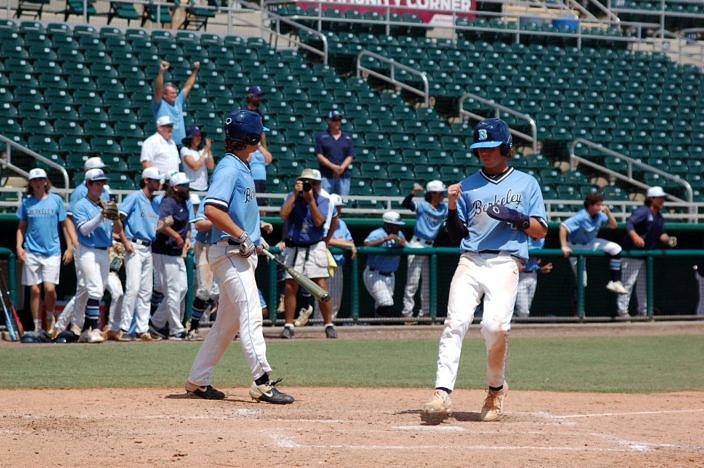 Anthony Castillo scores the first and deciding run of the ball game in the bottom of the fourth on an Owen McElfatrick single.

For The Villages, a lack of offense was the killer, but strong pitching and defense kept them toe-to-toe with one of the top teams in the state, and maybe the country. Manager Brady Bogart knew coming into the game that it would come down to a few key plays, and the plan to keep the Bucs within striking distance worked for the most part. The timely hits just didn’t come when they were needed most.

“That was our prototypical game this year,” Brady Bogart said. “We’re pleased with the way we’ve competed. I told the kids we competed that way all year. I mean, it’s just keep the game close and try to come up with some big hits and compete, and we’ve done it all year with our pitching. I told our kids after we lost to Trinity in the district championship game: I will take our pitching staff over any team in the state.”

It’s the team’s first trip to the state championships in 18 years of operation, and that’s something Bogart knows will last forever. Returning several players from this year’s squad, the Buffalo have a chance to build on this experience, too.

“I thought we squared some balls up and had some opportunities to take the lead and tie the game,” he said. “It just didn’t happen for us today, so we move on and enjoy it. We’re the first team at the Villages that went to the final four, so that banner wil be in the gym forever and they can’t take nothing away from this team that did that.”