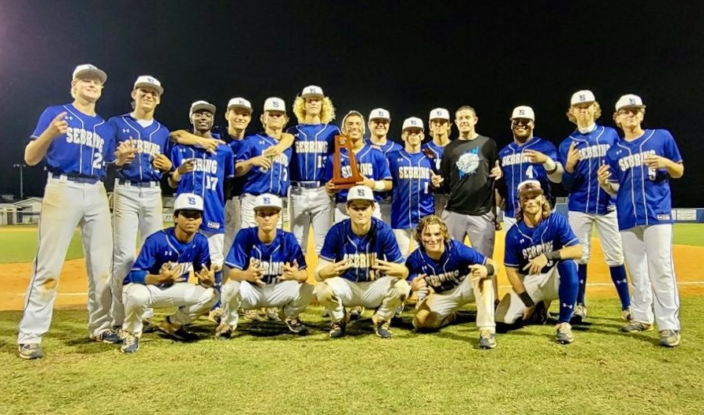 The 2022 District 4A-8 champion Sebring Blue Streaks. *Photo from @SebringHighSchoolBaseball.

One big inning proved to be enough for the Sebring Blue Streaks on Thursday night, as they scored all of their runs in the fourth inning to earn a 4-3 victory over the Parrish Bulls in the District 4A-8 championship. Sebring (20-5) wins its second consecutive district trophy, and also earns an automatic bid as a host team in the opening round of the regional playoffs.

The Bulls (18-8) broke up the scoreless contest with a run in the top of the fourth. Noah Eatman singled and advanced into scoring position when Ayden Hinkel followed with a walk, and Tyler Cripe lined an RBI single to center to put Parrish on the scoreboard.

Sebring wasted no time in answering back. Cam Kimbrell, Case McClelland and Reid Whitehouse all singled to load up the bases, and two base runners scored when Clayton Evans put the ball in play and reached on an error. Rhett Vaughn then plated the winning runs with a two-RBI single to center field.

Parrish fought back to pull within a run with a run in the sixth and seventh innings. Eatman doubled to lead off the sixth, and then scored thanks to an RBI single off the bat of Chase Taraska. In the seventh, Carson Womer led off with an infield single and then raced all the way around the bases to score from first base when Calin Heath clubbed a base hit to the right field corner.

But reliever Cam Kimbrell buckled down to close out the victory. Kinbrell induced a double play and followed that up with a strikeout to finish off the contest.