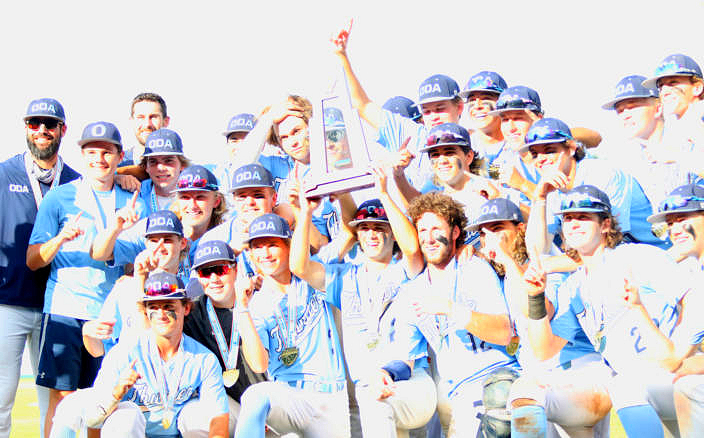 Out-of-Door Academy Manager Mike Matthews tends to make adjustments to the offensive approach based on what is happening through the course of every contest. After bunting their way to victory in the state semifinal, the Thunder switched to a power approach late in the action in Thursday’s Class 2A title game at Fort Myers’ Hammond Stadium.

The move worked to perfection, as Out-of-Door Academy capitalized with two late home runs to rally back for a 5-3 victory over the St. John’s Country Day Spartans to win the 2A state championship.

It is the first state title in program history.

“It’s a surreal feeling, unbelievable,” Thunder Manager Mike Matthews said. “I’m so proud of these guys. I told them before the season started that they were capable of this, and they continued to grow throughout the season and do the things that I asked them to do every single day. I’m very proud of them. We overcame a lot and I don’t think anybody really expected us to win this game. I told them it was going to be a dogfight and it sure was. We were able to come out on the winning side and that is awesome.”

Aidan Marino had a two-run home run in the fourth inning that broke a 2-2 tie and accounted for the winning runs. After Philip Fincher singled with one out, Marino battled through a gritty, nine-pitch at bat before he connected on a shot that traveled high and deep over the left field fence.

“It’s definitely surreal. It’s a great moment,” Marino said. “You never really know what it’s going to feel like. It was so exciting. Just doing it with my brothers here, you’ve got to love it. It was a long at bat and I was just battling to see every pitch. He threw me a mistake and I dominated it. I knew I got a piece of it but I still hustled out of the box, because that is what you have to do.” 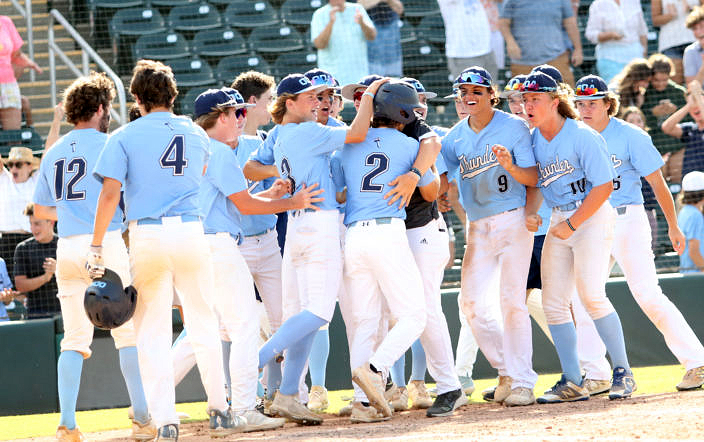 Aiden Marino is mobbed by his Thunder teammates after his two-run home run in the fourth inning that put his team ahead for good.

An inning later Nolan Lewellen connected for a solo shot to the same location that just stayed fair to tack on an insurance run.

“I was just happy to see it on the right side of the foul pole,” Lewellen said. “I’m just trying to take in every moment. There is not a better group of guys that we could have done this with. A lot of us have been together since we were nine or ten years old. This whole day we’ve been talking about it. We set our goal for the state championship and we did it. Goal acquired! Going out on top is a dream come true.”

Backed by a lead, the Thunder (24-3) turned to closer Tyler “Iceman” Colditz to close things out. The senior right-hander was up to the task, coming on in relief of starter Josh Cone with two outs in the fifth inning and going the rest of the way. Colditz did not allow any runs in two-and-a-third innings, while recording three strikeouts to lock down the save that cemented the state championship. 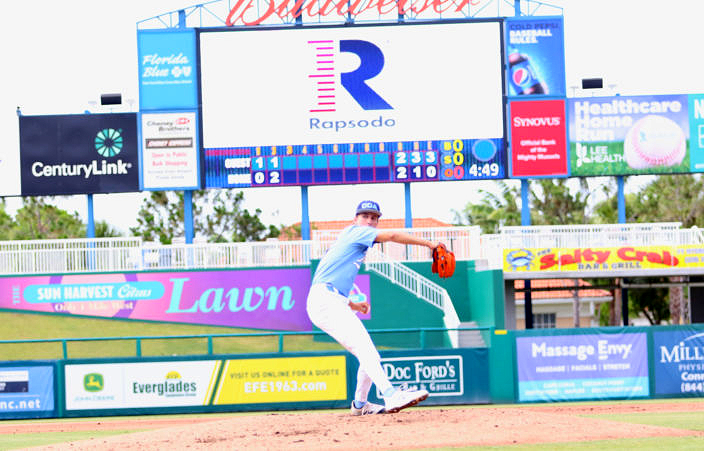 Josh Cone delivered a quality start in allowing just two earned runs in 4.2 innings of work for the Thunder.

“It is an amazing feeling being the last ones out there, ending the season with a win and going out on top – especially for us seniors,” Colditz said. “Our last high school game we got out on top as state champs. It feels amazing. You don’t know what to think because you just won the state championship. It’s just amazing. I’ve dreamed about that situation so many times, and it actually coming true feels amazing.”

Cone delivered a quality start to get the ball to the Iceman. The left-hander allowed two earned runs on eight hits and a walk, and he struck out two in four-and-two-third innings.

“I knew Josh was going to give us a good game and that he was going to go deep into the game and I would get the ball,” Colditz said. “So just being ready when my number is called, staying ready the whole time and being mentally prepared. It feels really good, everyone having confidence in me. It gives me a lot more confidence to go out there and get it done, especially with the defense behind me. I know they are going to make plays. So just pitch to contact and let my guys make plays.”

No play or moment was bigger than the one made by Thunder third baseman Tanner Fairchild in the top of the third inning. Connor Moore reached on an error and Jordan Taylor followed with a single on a liner to left field, and Connor tagged up and advanced to third off a flyout from James Oman. Tyce Moore then stung a shot down the third base line, where Fairchild made an excellent stabbing grab before next stepping on third base to double off the runner and ending the threat.

“It’s a huge momentum play,” Coach Matthews said. “They were setting up to score against us, and right-place, right-time. That’s how baseball works sometimes, and it is just a rush of emotion. The guy hits the ball hard and Tanner makes a great play. It just gets you going and it really was a momentum swing for our team to get back in the dugout and score some runs.” 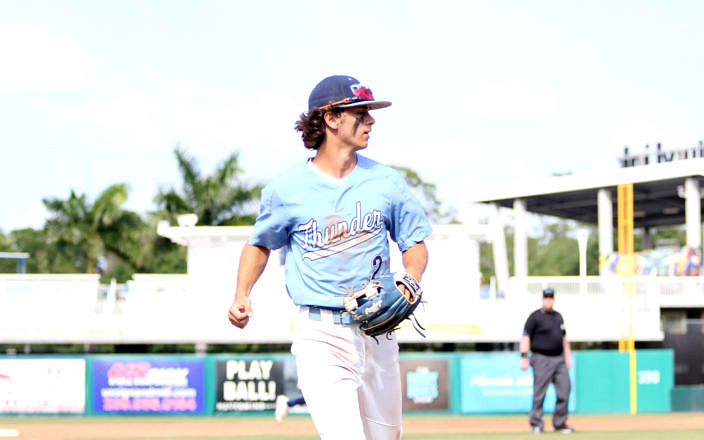 Thunder third baseman Tanner Fairchild made the play of the day when he turned an unassisted double play to end the top of the third inning.

Had that ball gotten through, both base runners likely would have scored to put Out-of-Door in a hole. Instead, in seemingly an instant, the inning was over, the threat erased, and all of the momentum the Spartans had just built was transferred over to the opposing dugout.

“It was a huge emotional switch from almost an defensive to offensive mindset,” Matthews said. “You’re trying to stop them from scoring runs and all of a sudden you’re back in the dugout and we’re rearing to score. That is the beautiful thing about baseball. Nolan Naese hits that little ball up the middle to score the second run to tie it, and he barely got a piece of it and it falls in. Then somebody squares up the ball like they did and Tanner gets a double play. That is what makes the game beautiful.”

Naese’s hit came in the bottom of the second inning, a double that found a gap in center to drive in Fincher and tie the game. Colditz and Fincher both reached on an error to start the frame, and Ryan Kelly supplied a sac-fly RBI to get the Thunder on the scoreboard. 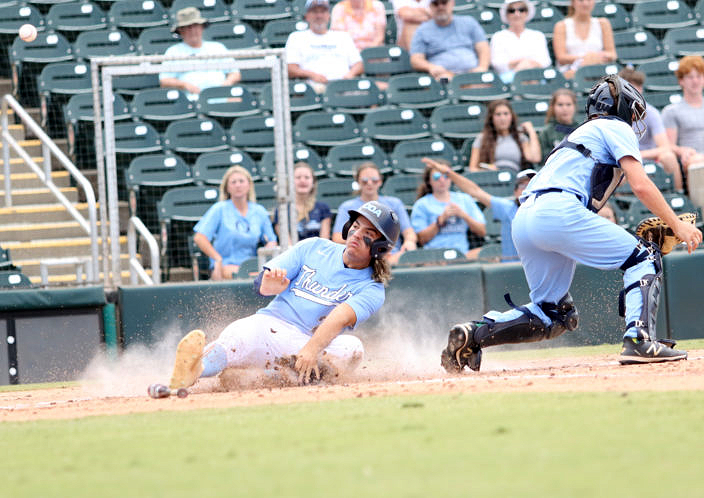 The Thunder tie the game in the second.