Jesuit Rallies 10-3 Past Jefferson For 5A-7 Championship 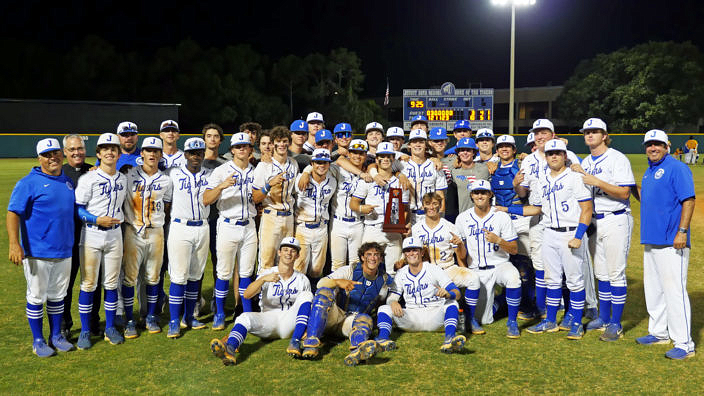 The 2021 District 5A-7 champion Jesuit Tigers. *Photo from @jesuittampa.

The Jesuit Tigers found themselves in unfamiliar territory early on in Thursday District 5A-7 championship, as Jesuit trailed the Jefferson Dragons by two runs early on in the action. The Tigers wasted no time in tying things up, and then jumping ahead, charging on for a 10-3 victory to claim the district trophy. They scored in every inning, and senior reliever Kristopher Sosnowski cooled the Dragons’ bats for the comeback victory.

Jesuit has made a habit all season of jumping to an early lead, and has only trailed in a game for a total of 18 innings the entire year. Save for a late-season loss to the IMG Ascenders in which they trailed nearly the entire way, the Tigers (23-2) found a way to come back every time that they trailed this year.

Jefferson (16-10) scored all of its runs in the top of the second to erase a 1-0 deficit following a Cole Russo RBI single for Jesuit in the bottom of the first. Jaiden Duarte and Yadiel Perez both singled, and Matthew Johnson reached on an error as he laid down a bunt that was misplayed to allow the tying run to score. Yadiel came in on a wild pitch, and Javier James delivered an RBI single that plated Johnson for a 3-1 Dragons lead.

The Tigers wasted no time in answering right back to even it up again on a two-run home run from Wes Mendes in the bottom of the inning, and were right back in the lead thanks to a sac-fly RBI from Nick Rodriguez an inning later. Bradke Lohry added an RBI triple an inning later, two unearned runs came across the following frame, and Cole Russo capped it off with a three-run home run in the bottom of the sixth inning that effectively put the game away.

But just as key to the win was the performance from Sosnowksi, who has been a savior for his club all year long. Despite making just one start all season, the senior right-hander improved to 7-0 after picking up the relief victory with four-and-two-third shutout innings. He struck out eight and allowed just one hit and no walks in his tenth relief outing on the year.