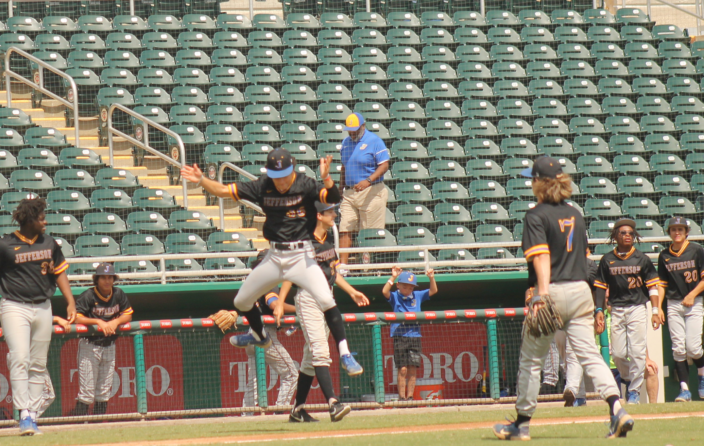 The Dragons celebrate after getting out of a jam late in the action during their state semifinal against Mosley.

There is something unique and special about this Mosley Dolphin team this season. Although the program has traditionally reached the state Final Four in many seasons past, there is nothing traditional about this group of players.

Tuesday morning the Dolphins stayed true to form in playing the game the same way they have done it all season. Jaden Rudd delivered a gem on the mound and the offense rode a big fifth inning. The result was a 5-1 victory over the Jefferson Dragons, in a Class 5A state semifinal at Hammond Stadium in Fort Myers.

“I thought we battled pretty hard for all seven,” Jefferson Manager Spencer Nunez said. “One big hit led to it, but I thought my guys responded well to it. There was never any doubt in my mind that my guys would stop fighting for it, so I’m really proud of each and every one of them.””

Already commanding a slim 1-0 advantage, David Hudson delivered the big blow with a grand slam home run in the fifth. Trent Nelson led off with a base hit that turned the lineup over, Rudd lined a single to center and Coleman Rowan dropped a base hit to right that filled the bags for David Hudson. He then turned on 2-2 pitch and sent it soaring high and deep to carry over the left field fence.

“When I first hit it, I didn’t even know it was gone,” David said. “So when that happened it was immediate chills. Just going through that at bat, I was trying to stay up the middle and just try to tap it and get some runs in. I did not mean for that to happen, but I’m glad that it did. It is a moment that I dreamed about and it is surreal. Coming across that plate and having my teammates hammering me, it’s fun.” 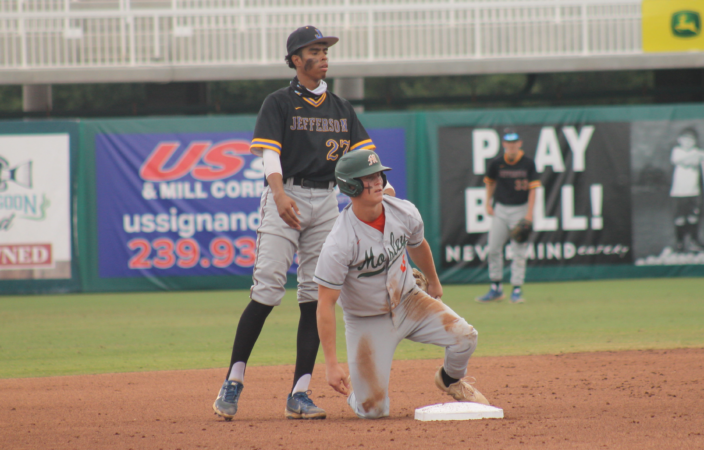 Rock Holland walked twice and stole a base for the Dolphins.

What also was big was that the Dolphins took the lead early and never trailed in the contest. Rudd came in thanks to an RBI single to center from Tyler Wave in the top of the third, after he walked to get it started. Catcher Coleman Rowan moved Rudd into scoring position, after he was hit in the head by a pitch, in which the offering plunked off of his batting helmet but did not cause an injury.

“All year we’ve simulated being down here in the Final Four, because we know our past and we’ve let a few people down,” Rowan said. “We figured this time is our time and we’re the best team down here, and we really feel like we can do it. As far as getting hit in the head there, I was willing to do whatever it takes to get on base. So when he gave me the gift, I wasn’t going to move out of the way.”

Even though he was pitching, Rudd did not give way for a courtesy-runner, and instead proved he was the right guy on the bases by scoring from second on Wave’s big hit. 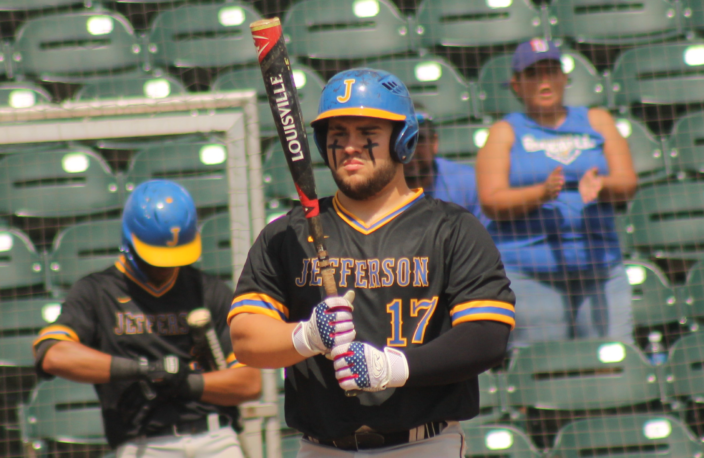 Alejandro Montada was 1-for-3 for the Dragons.

Rudd had arm issues earlier in the season and did not even pitch until about midway through the year. But he has been a constant in the batting order, and Mosley’s most trusted hurler during the playoffs.

Rudd went the distance on the mound to earn the win. He allowed one earned run on four hits and a walk, and he struck out five. He improved to 7-1 this season, with five playoff victories.

Jefferson (19-11) got its lone run in the bottom of the sixth inning. Javier James legged out a base hit with two outs, Jayden Vazquez walked to move him into scoring position, and Matthew Johnson sent an RBI single to left field to get his club on the board. 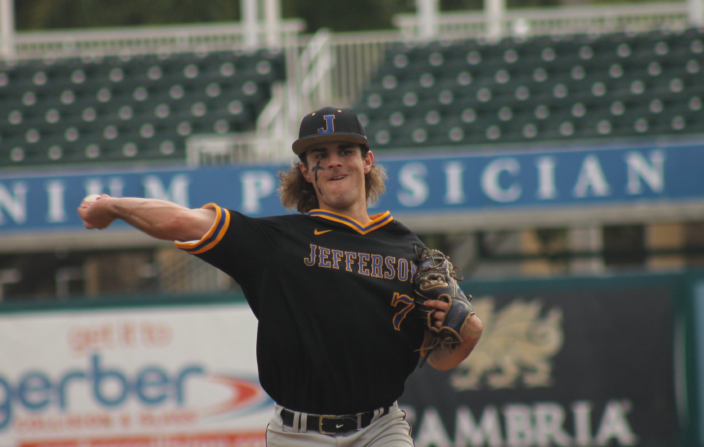 Matthew johnson made the start and took the loss for the Dragons.

Javier James led the team by going 2-for-3 with a double. He was the only Dragon to collect multiple hits.

The late push was a microcosm of the Dragons’ season, after the club rebounded from a 6-7 midseason record to go on a run that brought it to the state tournament.

“Once we got towards that 6-7 mark, we knew that was not where we wanted to be,” Jaiden Duarte said. “We knew our potential was so much higher, and that gave us a little drive. Then the Hillsborough game brought us even closer, and we just connected and all the dominoes fell in and we just took off from there. Coach is always talking about how we have a roll and we have to play our role, and as the season went on everybody just started to play their role to a T. That is what got us here.”

Jefferson took down some big programs during its playoff run, most notably their biggest rival and the top-ranked team in the state in the Jesuit Tigers. Once the calendar turned over to April Fools Day, they went 13-4 during the final stretch run of their season.

“I’m so proud of this team,” Nunez said. “We didn’t get the result we wanted, but the stuff that these guys have been through for three or four years having only been at Jefferson, they are going to be something in life past high school and past college because they had to handle adversity like grown men for four years.” 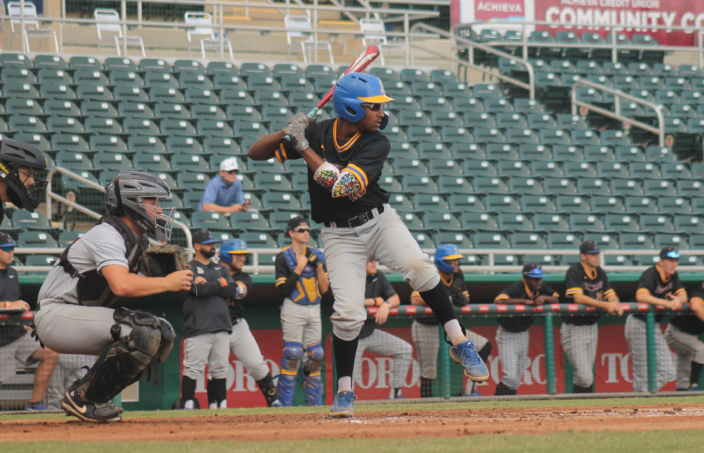