Sebring Walks Off Hardee For 4A-11 Championship 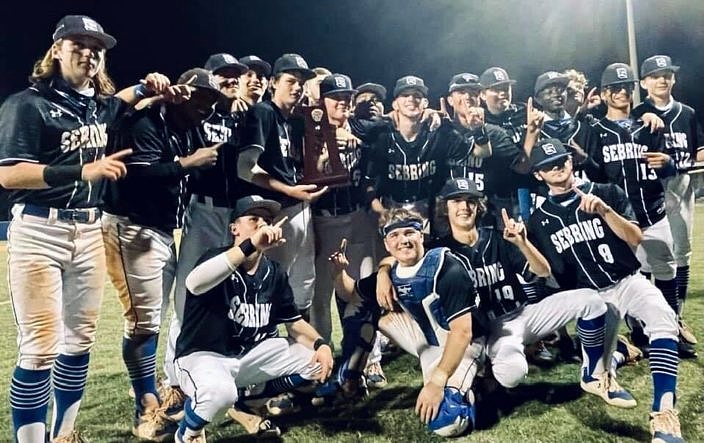 The Sebring Blue Streaks closed out the regular season strong to go into the district playoffs in the best position as the top seed, so it is little surprise that they again had their best in the very end when it mattered most. After surrendering a big lead and allowing the Hardee Wildcats to rally and tie things late in Thursday’s District 4A-11 championship, Rhett Vaughn drove in Reid Whitehouse for the 5-4, walk-off victory in the bottom of the seventh inning.

Sebring is the 2021 4A-11 champion. The Blue Streaks (16-8) also advance to the regional playoffs, where they will host the Lemon Bay Manta Rays (18-7) in a 4A regional quarterfinal. Hardee also moves on to regionals, traveling to take on the Mariner Tritons (15-12).

Sebring takes a four-game winning streak into the regional playoffs, and that momentum helped build a 4-0 lead in Thursday’s title game. Cam Kimbrell and Vaughn had back-to-back singles in the second, and Zach Doorlag got his team on the scoreboard with a two-RBI triple on a liner into the left-center field gap. Trey Bender doubled and scored on an error, and Case McClelland singled and scored on an RBI single from Trey Rowe, as the Blue Streaks added two more runs in the fifth.

The Wildcats (16-9) refused to go quietly, erupting for three runs in the sixth before then tying it up in the top of the seventh. Palmer Klein singled and then scored thanks to an RBI double from Alex Solis, who later scored on an error that put Jace Bryan on the bases. Casen Gough came through with an RBI single that drove in Bryan.

In the seventh, Caleb Block walked leading off to get it started for Hardee. Klein reached with a bunt single, and Block then beat the throw home when the defense went for the lead runner off a fielder’s choice ground ball from Solis that evened things back up.

But Whitehouse was hit by a pitch and Rowe walked to put the go-ahead run into scoring position for Vaughn, who wasted no time in winning the game on the first pitch that he saw in the seventh.