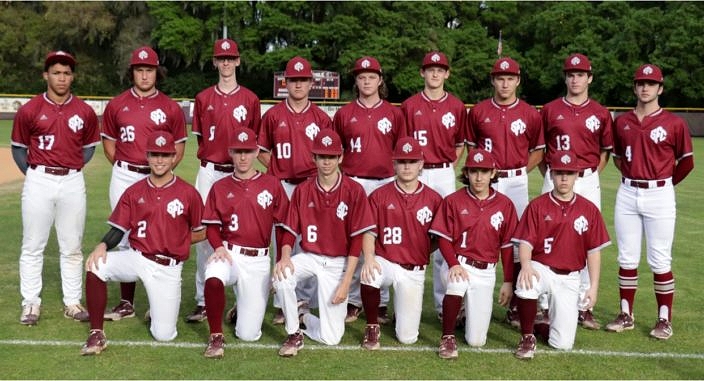 Santa Fe Catholic won the Dan Giannini Hawks Classic for the first time, with their 9-5 comeback on Wednesday night. *Photo from @santafecatholic.

A nine-run fourth inning paved the way for the Santa Fe Catholic Hawks to claim the Dan Giannini Hawks Classic tournament title for the first time ever, as the tourney hosts claimed a 9-4 win over McKeel Academy in the championship on Wednesday night. The Hawks (11-3-1) overcame a 3-0 deficit with the big inning, and reliever Jacob Kruzlic held the rope on the mound to earn the victory.

Santa Fe Catholic downed Lake Gibson in the opening round, and then defeated Sunshine State Elite Academy in Tuesday’s semifinal to return to the title game for the first time since the 2018 season. The Hawks are also on a seven-game winning streak, their last loss coming to McKeel on March 9th.

The Wildcats (7-6) had beaten them twice already this season, so the win brought a little extra reward for that as well.

“It feels pretty good,” Santa Fe Catholic manager David Saliba said. “It is a lot of work for the host to win, because it is a lot of work on my staff, my kids and my parents to host four games a day for three days. But everybody did a good job, we got good weather, we had some good teams and everything went real well.”

Like most younger clubs, the Hawks are still catching up on things following last season’s abrupt early ending. The team struggled against the tougher opponents on the schedule early in the year, including both losses to the Wildcats.

“The season got cut short, and we had a bunch of tenth graders last year that didn’t get to finish it,” Saliba said. “The first game they beat us pretty good. The second game, they got ahead in the seventh inning to beat us, so it was a little closer.”

McKeel won the tournament championship in 2016, and the Wildcats acted quickly in pursuit of another as they got ahead early on Wednesday by taking a 3-0 lead in the top of the first. Branson Ashley was hit by a pitch and then moved into scoring position after Breton Cusic reached with a bunt single. A wild pitch plated Ashley, and Cusic came in on an error that put K.J. Scobey on base, and he scored on an RBI single from Matthew Arce.

“Our first pitcher we sent out has been battling a little injury and he wasn’t sharp, so we got Jacob Kruzlic in there and he held them for five innings so we could have one big inning. We were able to have a real big inning and scored nine runs,” Saliba said.

Kruzlic delivered to keep his squad alive. The junior tossed four straight scoreless frames, and allowed one run on three hits and a walk in five full innings of work. The right-hander struck out four and improved to 2-1 on the season.

The offense did its part with all of its runs in the fourth. After loading the bases with only one out, the Hawks were patient to work the count and turn that into several RBI walks that pushed them into the lead. Peter Walsh then delivered a sac-fly RBI that scored Jacob Knisley, Jose Burey followed with a two-RBI single and Trent Henley opened the floodgates with an RBI single to center field that capped off the scoring.

Dawson Smith tossed a scoreless seventh to close out the victory and keep the winning streak intact. Santa Fe Catholic now looks to carry that momentum into the second half of the season.

“This is going to be huge for us,” Saliba said. “We have a young team and we only have three seniors, so early in the year we weren’t doing as well with the leads. But here lately, when we’ve been able to get ahead of people we’ve been able to hold things down a little bit. The pitchers are getting a lot more mature now after the developmental got put back a little bit. So we got a chance to get some things done in the fall, and we’ll keep our fingers crossed that we haven’t had any disruptions this season and we’ve been able to keep it going.”