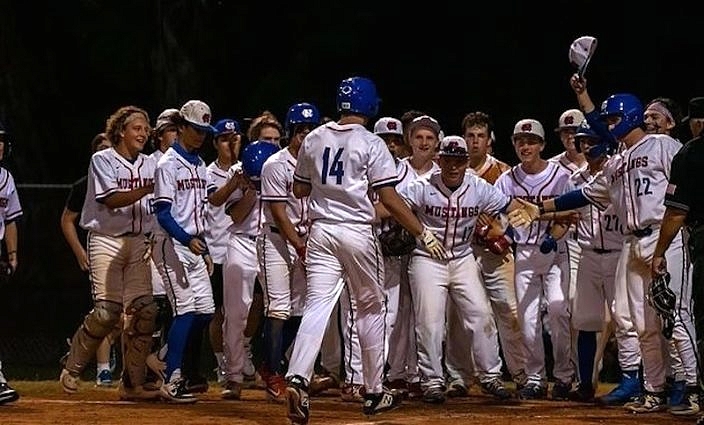 Scott Lynch is swarmed at home plate following his solo home run for Northside Christian in the fourth inning. *Photo from @ncsmustangs.

Northside Christian enjoyed some big performances on Friday evening to lead the way to an 8-1 win over the visiting St. Petersburg Green Devils. Senior Shane McClanahan earned a complete-game win on the mound, and sophomore Scott Lynch led off the fourth inning with a solo home run that sparked a four-run scoring burst that put the game out of reach.

The Mustangs (4-3-1) get back over .500 heading into Spring Break, and also halt a three-game losing streak.

Clinging to a 2-1 advantage, Lynch jumped on a 1-1 offering and sent it over the left field fence for the round-tripper that doubled their lead. Andrew Williamson singled with two outs to keep things going, and he moved to third when Ryan Cerrone followed with a base hit to center. An error allowed Williamson to score, and Cam Salter delivered an RBI single to send in Cerrone. Salter stole second to keep the pressure on, Elijah Baptist walked and Salter later swiped home on a double-steal play.

Salter was 2-for-3 with two RBIs and two runs, while Cerrone and Williamson both scored twice. Ryan Lowe went 2-for-4 with an RBI double in the first that gave Northside Christian a lead it held the rest of the way.

Shane McClanahan did his part on the hill, needing just 86 pitches to go the distance. The right-hander scattered six hits and allowed one unearned run. He did not allow any walks and he had four strikeouts.

Marcus Joseph had an RBI single that drove in Brennan Smith for the lone run on the night for St. Petersburg (3-4).