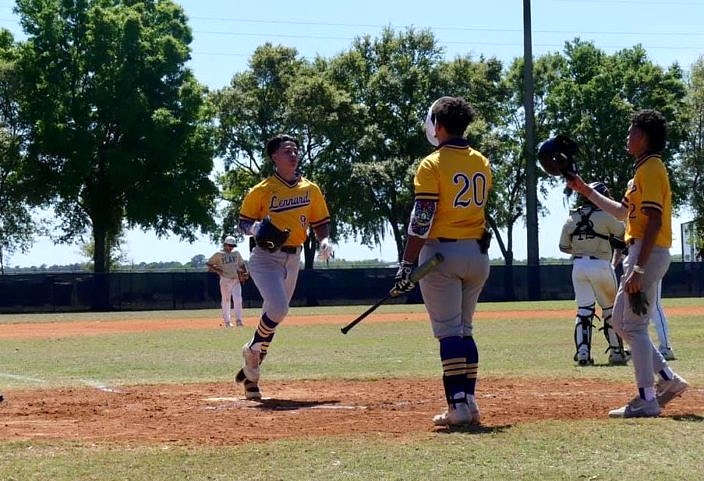 Lennard’s Francisco Alaniz is greeted at home plate following his two-run home run in the first inning of Saturday’s 2-1 win. *Photo from @LennardHSBaseball.

There always seems to be a special sort of energy in the air at the ball field for the start of the annual Tony Saladino Tournament every year. After COVID-19 came along in 2020 and robbed us of baseball right on the eve of the tournament, everyone is as excited as ever that the annual event has returned this season.

Perhaps no team was hungrier and more energized to play than the Lennard Longhorns, who returned from shutdown to deliver a spirited effort for a 2-1 victory over the Plant Panthers, at Durant High during the opening day of action of the 39th annual Hillsborough County Schools’ Tony Saladino High School Baseball Tournament.

Lennard last played on February 22nd, suffering its third tight defeat to begin the season. The team then had to shut down operations due to COVID protocols, canceling the next four contests and ensuring the club would still be eligible for the tournament. Lennard finally returned to action on Saturday afternoon, and it was little surprise that the Longhorns (1-3) got off to a fast start.

Senior Francisco Alaniz channeled that energy into his first at bat in the top of the first inning, as he had a two-run home run to account for Lennard’s runs. Sebastian Munoz was hit by a pitch leading off, but was then erased at second on a fielder’s choice off a bunt from Alex Brazer that brought up Alaniz. He sent a 1-1 pitch over the center field fence to stake his team to the early lead.

The pitching and defense did the rest. 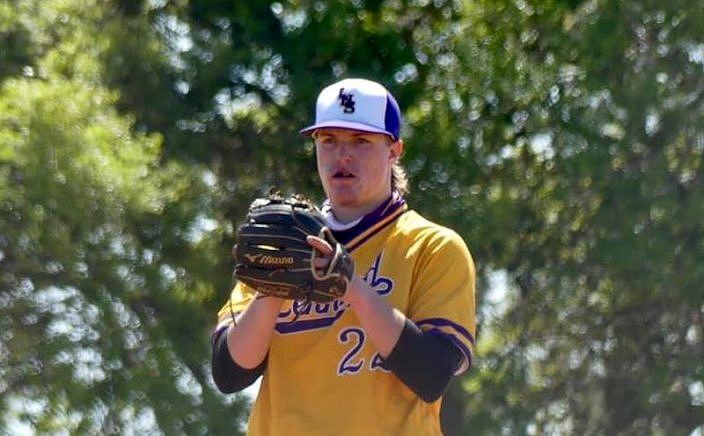 Sophomore Carter Paine had seven strikeouts in the complete-game victory for the Longhorns. *Photo from @LennardHSBaseball.

Longhorns sophomore Carter Paine earned the complete-game victory for the Longhorns, with seven strikeouts in seven innings. Paine scattered five hits. but did not surrender any free bases. He earned his first win to improve to 1-1 on the season.

The Panthers (1-8) hung tight the entire way, thanks in large part to the pitching staff. Starter Sebastian Martinez limited Lennard to just two hits and a walk in five-and-two-third innings of work. The senior had six strikeouts and also hit a batter. Reliever Andres Camargo kept things scoreless while getting the final four outs, keeping Plant in it to its final swings.

Thomas Bolton accounted for the Panthers’ lone run, which cut that deficit in half in the bottom of the fifth. Bolton led off with a single to left, Gabe Suarez followed with a base knock to center, and Conley Strayer delivered an RBI single to right.

Paine then retired the next nine straight batters to preserve the victory.

The win brings a small measure of payback for the Longhorns, who were no-hit in a mercy-rule loss to Plant the last time the two teams faced each other in the Saladino Tournament, back in 2018.