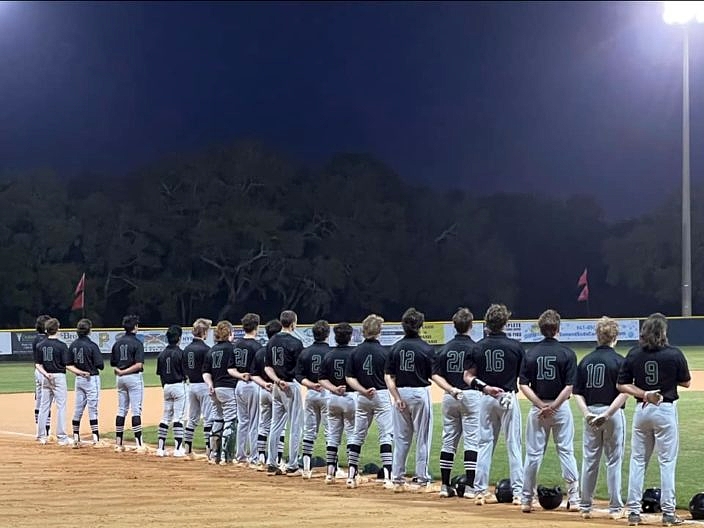 For the second time in this young season, the Lakewood Ranch Mustangs shut out the Manatee Hurricanes, with a 5-0 road victory on Tuesday evening. This comes just a few games since Lakewood Ranch opened the 2021 campaign with a 4-0 shutout over the Hurricanes.

It is the fourth shutout victory overall this year for the Mustangs (5-2). The team has a combined ERA of 0.28 thus far this season, with 65 strikeouts in nearly 50 innings.

On Tuesday night it was junior Ryan Combs who toed the rubber for Lakewood Ranch, and the right-hander delivered six scoreless innings to earn his second win of the year. Combs (2-0) allowed just one hit, a single to left field by junior Justin Cook in the bottom of the first. Combs had two walks, and also hit a batter, and he struck out seven to raise his season total to 12 overall.

Austin Parcels finished things off by striking out the side in the seventh.

Things were tight early on, as a 1-0 lead in the second was the only scoring heading into the top of the sixth. That run and slim advantage came in the top of the second, when John Schroeder led off with a single, stole second and advanced to third on a throwing error, and then came in on an RBI single from senior Tyson Meyer.

The Mustangs added on two more runs in the sixth, and another two in the seventh that put things out of reach. Schroeder led the way at the plate, going 2-for-4 with three RBIs and a run, and Zach Fenimore had a double and a run.