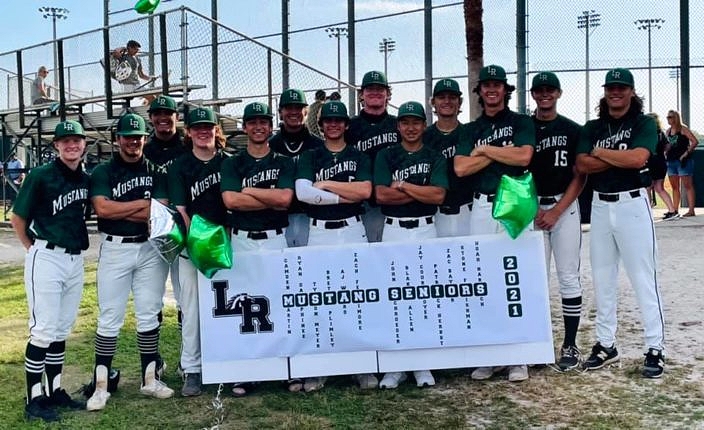 The Mustangs went all-out in paying tribute to their 13 seniors in the class of 2021. Lakewood Ranch went on for a 3-0 win over Manatee. *Photo from Lakewood Ranch High School Mustang Baseball.

One of the largest senior classes of any baseball team in Florida celebrated its Senior Night on Tuesday, as the Lakewood Ranch Mustangs paid tribute to the careers of their 13 seniors prior to its 3-0 victory over the Manatee Hurricanes. With such a rare group this large, Lakewood Ranch was able to play an entire roster of seniors for the game.

The timing seemed perfect to help calm the seas of a choppy, seesaw season for the Mustangs. The victory halted a two-game skid and got Lakewood Ranch back over .500 with an 8-7 record.

Brett Plimley and Tyson Meyer combined on the mound for the shutout. Plimley made the start and took the ball to two outs in the sixth inning, before Meyer came on in relief to record the final four outs. Plimley recorded eight strikeouts and Meyer had three.

The Mustangs grabbed the lead with a run in the first inning, then added some insurance with two more runs in the third. Noah Harsch collected the first of his two hits leading off the bottom of the first, and he stole second before later scoring off an error. Lakewood Ranch then loaded up the bases in the third when A.J. Ward walked and Harsch and Patrick Herbst both singled. Camden Martin came through with an RBI single and John Schroeder followed by delivering a sac-fly RBI.

It is the third time this season that Lakewood Ranch has shut out Manatee (3-11). The Mustangs have won all three meetings of the season series by a combined score of 12-0.