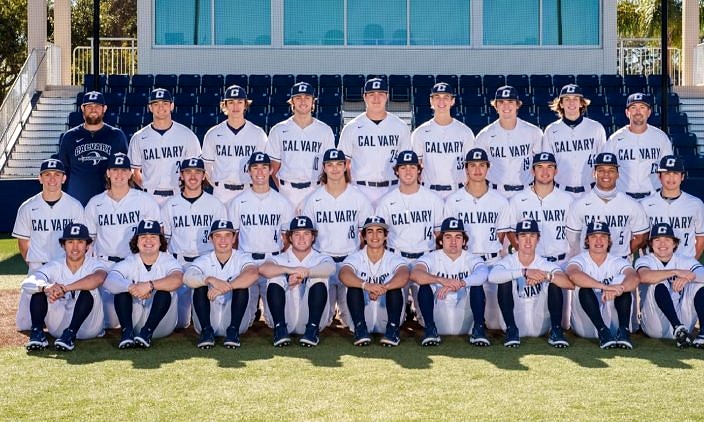 The Calvary Christian Warriors are off to a 6-1 start to the 2021 season. *Photo from @calvary.us.

The Calvary Christian Warriors have a knack for winning tight ball games. That trend continued on Thursday, as the Warriors rallied for the winning run in the top of the seventh inning for a close, 3-2 victory over the host bishop McLaughlin Hurricanes.

Junior Matt Rose singled home Charles Stevens for the deciding score, with a bases-loaded RBI base hit to left field. Stevens got it started with a lead-off single, and Sam Hunter worked the count full before then finding a hole for another base hit. Eli Kapkowski dropped a bunt that filled the bags after all runners were safe on the fielder’s choice that brought Rose to the plate.

Dearl Edens earned the win for the Warriors (6-1). The junior came on in relief of senior starter Jack Cebert in the fifth inning, and he went the rest of the way for his first win of the season. After grabbing the lead, Edens retired the final three batters in order in the bottom of the seventh. He struck out the last two hitters, finishing with four overall.

After falling behind 2-0, the Hurricanes (2-3) battled back to even things up again in the bottom of the fifth. Junior Augie Mojica got it going with a one-out single to left, then taking second on a wild pitch and coming around to score on an RBI single from Isaiah Myles. Myles then followed him in on a throwing error that made it a new ball game at 2-2 heading into the seventh.

Landen Maroudis had a double and then scored on an error in the fourth, and Stevens scored on a sacrifice fly from Rose in the fifth to stake Calvary with the 2-0 advantage.

Johnny DiBenedetto went 2-for-2 with a double and a walk to reach base three times for Bishop McLaughlin.