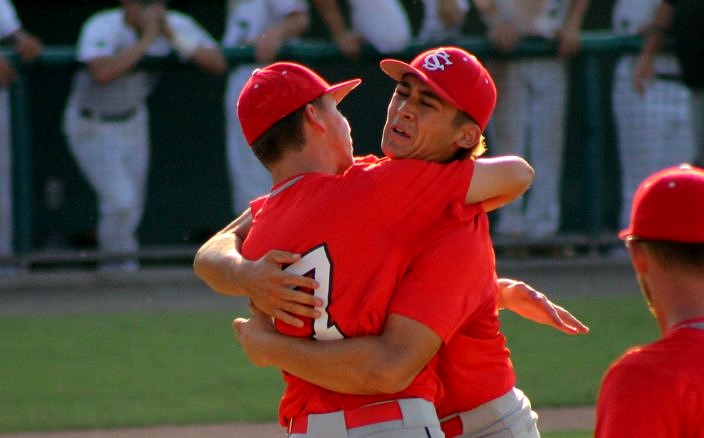 The Chargers celebrate after closing out the victory to advance to the 8A state championship.

For the first time in history, the Strawberry Crest Chargers will play for a state championship. Wednesday afternoon the Chargers prevailed 6-5 in nine innings in a seesaw battle with the George Jenkins Eagles, in a Class 8A state semifinal at Hammond Stadium in Fort Myers. The contest featured a little bit of everything and had fans on the edge of their seats throughout, as the two sides played tug-of-war for control by slugging away all day long.

Strawberry Crest next faces the Plant City Raiders in Thursday night’s 8A title game, also at Hammond Stadium. The Chargers (19-10) look to complete the story with their first state championship, while the Raiders also look to bring home state glory for the first time in program history. Plant City (29-2) also advanced to the finale following an 8-0 victory over the McArthur Mustangs in Wednesday’s other semifinal. The Raiders defeated the Chargers 5-3 in a meeting earlier this season.

“We are happy to be playing on Thursday. We came here to do two things and we just got one of them done,” Strawberry Crest manager Eric Beattie said. “It’s a tough stage. You are used to playing at your own field and then you come here and it is a big stadium and a big stage with a lot of people, and it is a very big game. It takes a special kind of athlete to settle everything down, and these guys came out hungry today. They put their foot on the gas and kept it there.”

After slugging it out for eight action-packed innings, Strawberry Crest finally landed the knockout blow with three runs in the top of the ninth. Colby Fanning got things started with a base hit to left, and Alex Mussenden moved him into scoring position with a sacrifice bunt. Following a pitching change, Tanner Kelley hit an RBI double deep to left that put the Chargers in the lead for good.

Strawberry Crest added on two more crucial insurance runs. A fielder’s choice caught Kelley at the plate attempting to score, but Ben Pues worked a walk to keep things going. That allowed Jacob Heath to jump on the first pitch and rock it for a double deep to center that plated a pair for the deciding margin. 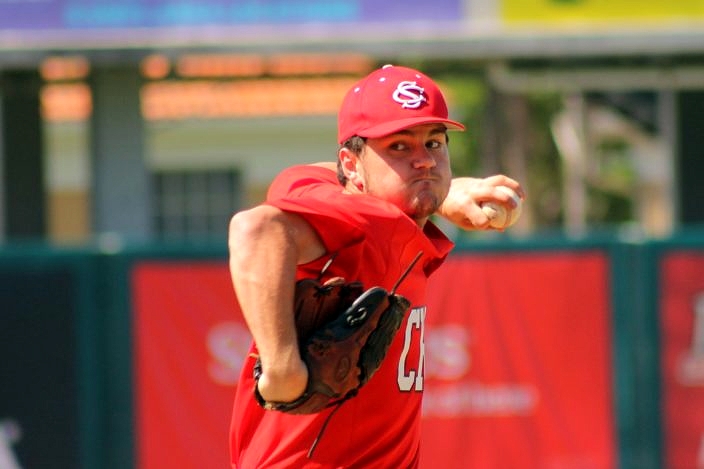 Alex Marshall made the start for the Chargers, allowing two runs and striking out four in three-and-a-third innings of work.

As was the case all game long, Jenkins did not go quietly even despite trailing by several runs. The Eagles battled from behind all game, twice evening things back up. Down to their final three outs, the batters kept plugging away to keep their hopes alive.

The first three batters all reached base to start the bottom of the ninth, placing the go-ahead run at the plate with no outs. Jared Murphy walked, starting pitcher Michael Ross singled to short and Robert Van Vuuren was hit by a pitch to fill the bags, and Garrett Richardson lined an RBI single to center to keep the pressure on. Smitty Luttermoser supplied a sac-fly RBI that pulled Jenkins within a run, before reliever Jacob Heath dug in to record the last two outs that closed out the contest.

“It was a heck of a game,” Eagles manager Alex Angulo said. “We battled back after being down 3-0 after one, and we’ve done that all season. We came back and were able to tie it in the bottom of the seventh, and a couple of big hits from their guys got them three runs in the ninth. We were able to battle back and it was just an unbelievable game. It was a tough way for our season to end but I am so proud of these guys and how hard they fought. I’m lucky to have coached these guys.”

The Chargers burst out of the opening chute and erupted for a 3-0 lead in the top of the first inning. Kade Manderscheid lined a single to center and Ben Pues followed by clubbing a double to left to put two guys into scoring position with one out. Jacob Heath got the scoring started with a base hit to center that drove in both runners.

“George Jenkins’ pitchers kept it on us all day long, their defense was spectacular and nothing came easy. So to be able to get a ball down in that outfield was sure hard, but we found a way to get it done,” Heath said. 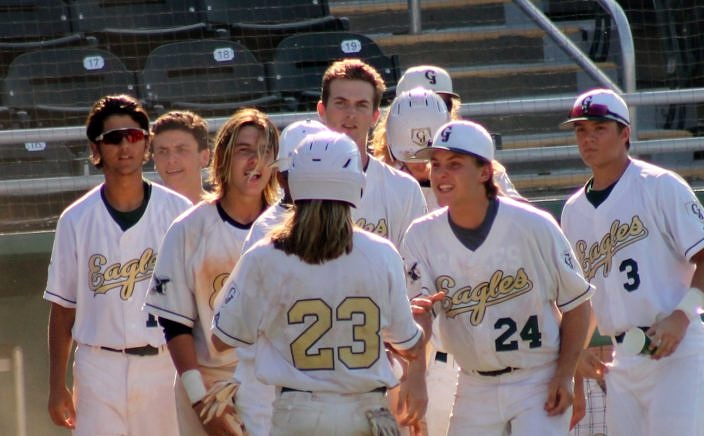 The Eagles cheer on Garrett Richardson after he doubled and scored to tie things up in the bottom of the seventh.

Strawberry Crest added on to make it a big inning. Joseph Parillo then dropped down a great bunt that went for a base hit that kept things going, and a fielder’s choice erased Parillo at second and put runners on the corners. An error then allowed Heath to cross the plate and extend the lead.

The Eagles got a run back to get on the scoreboard in the bottom of the second. Andrew Starr led off with a hit to left, and Ross was hit by a pitch and then gave way to courtesy runner Cadmiel Pompa. Van Vuuren came up clutch with a single to right that plated Starr to make it a 3-1 ball game.

George Jenkins kept plugging away and pulled within a run with another score in the bottom of the fourth. Designated hitter Jared Murphy drew a lead-off walk and a sacrifice bunt from Ross moved him into scoring position. Van Vuuren fell behind 1-2 but fouled off several pitches and then connected for a shot deep to left for an RBI double that made it a 3-2 ball game, while also chasing Marshall from the mound.

Manderscheid came on in relief of Marshall, and the Eagles continued to attack and challenge the Chargers every step of the way. Jacob Herbert lined a double down the left field line for a scoring chance in the fifth, but Strawberry Crest recorded two big outs on the bases to quell that threat. An inning later Andrew Starr reached on a single hit back off the pitcher’s glove, but a smooth, 4-6-3 double play ended that scoring opportunity. 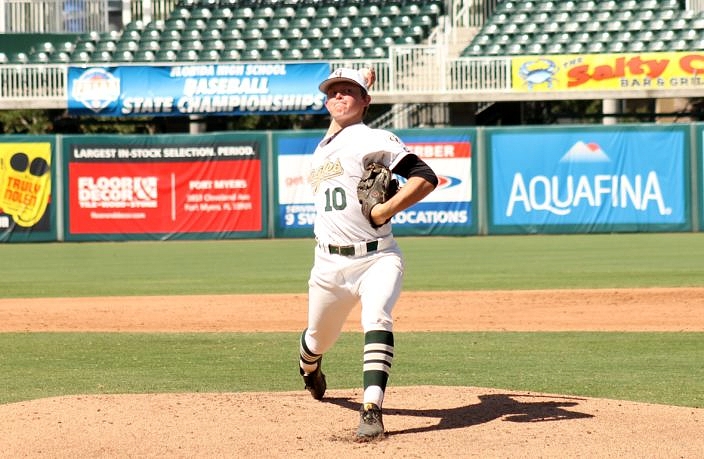 Michael Ross was a workhorse for George Jenkins, pitching into the ninth inning on just 84 total pitches.

George Jenkins finally completed the comeback just in the nick of time, tying things back up with two outs in the bottom of the seventh inning. After a flyout to left, Garrett Richardson sent a screamer into shallow right field for a double, before then tagging up and advancing to third when Luttermoser lined out to right. A passed ball gave Richardson all the light he needed to race home for the tying run that forced extra innings.

“Credit to Jenkins; that team fights their butts off and does not give up,” Beattie said. “Tremendous amount of credit to their players and coaches for the intensity and how well they played being underneath basically this whole game.”

After reaching the Final Four for the first time in program history last season, the Chargers returned this time feeling much more comfortable and prepared for the extra challenges that come with competing at the state tournament. Through the course of action nearly every obstacle imagined came about, and Strawberry Crest played in several extra-inning games this season that had them well prepared for another marathon battle. 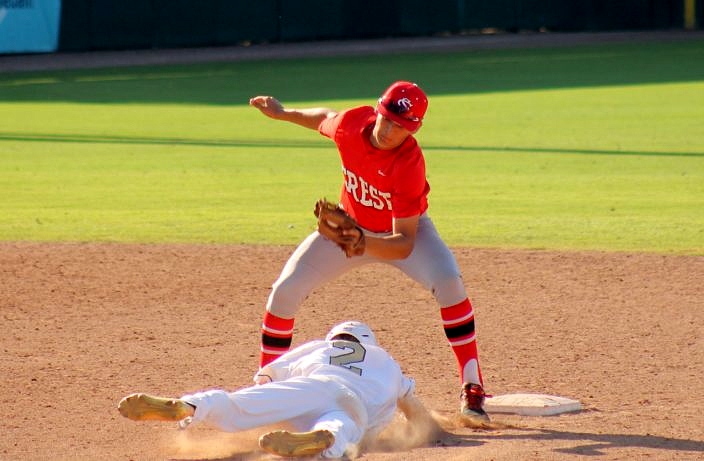 The Chargers catch a base-stealer to record a big out in the bottom of the ninth.

“Most teams that make it here, most of the time it is their first time being here,” Pues said. “Most teams are not even fortunate enough not just to make it two times in-a-row but two times in their entire high school careers. So I think just the familiarity of the situation, with the press and all the fans being out here, we are familiar with it and we’re not afraid to go out and make a play. Last year it was not that we were afraid, but it was a foreign environment for us, and now we’ve played in every single situation you can ask for.”

Pues is the architect mastermind behind a unique baseball situation of his own creation that has helped unite the baseball community. Inspired by something he saw on television a few years ago, Pues built a miniature replica field of Fenway Park in his backyard and holds wiffleball tournaments there. It took nearly two years to construct and most of the team helped pitch in, and now it has grown to include numerous teams around the area for large, unforgettable wiffle ball battles.

“During the offseason there was a lot of team-building, not just for us but for a lot of teams in the Tampa Bay community,” Pues said. “It didn’t just bring us together; it brought a lot of other teams together. It built some friendships and relationships that you probably wouldn’t have, and it is a lot better than playing video games inside and not communicating with everybody.”

Among the many teams that played in the wiffle ball games are the Plant City Raiders, Thursday’s finale opponent. From those friendly games in the offseason to the biggest stage competing for the ultimate reward, those friendships only add to the memory all will enjoy in Thursday’s championship action. 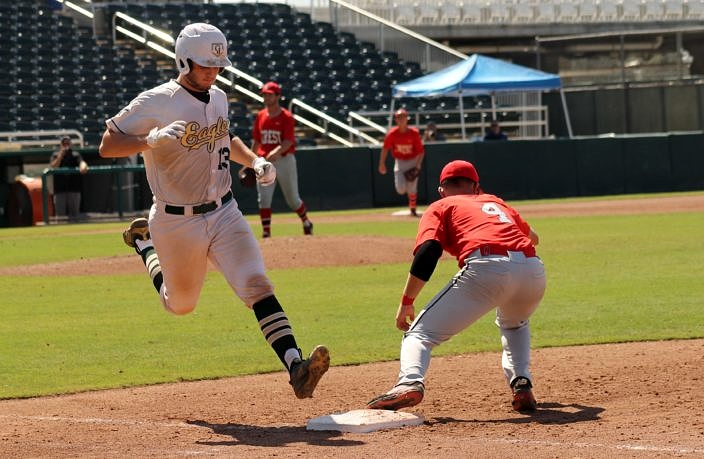 Close, exciting plays were a staple throughout all of the action.