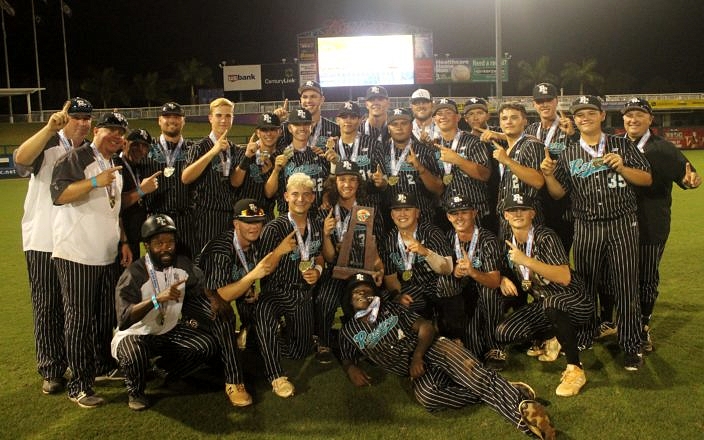 The Plant City Raiders arrived in Fort Myers at the 2019 state tournament at Hammond Stadium making dinosaur tracks. From the start to the finish the players defied any notion that their story would have but one ending, and when the final chapter was written the team that had never been here before left with the 8A state championship.

The Raiders prevailed with a gritty, 3-1 victory over the Strawberry Crest Chargers in Thursday’s title bout, bringing home their first state championship in program history. The two schools located mere miles apart battled in a friendly but competitive showdown in front of a large, enthusiastic crowd that came in support of the special event that meant so much to their community.

“We never thought in a million years that we would be here and it feels indescribable,” senior Parker Messick said. “Halfway through the season we knew we had what it took, and I say that we didn’t think we’d ever make it just because the last few years was such a struggle, but we really bonded as a team. We dogfought from the beginning and we really felt the bond, and we felt like, why not us? We’re here, so let’s win it.”

Both clubs played in the championship game for the first time, and knowing that victory for either side came at the expense of close friends falling in defeat made it an even more emotional game. Across the dugouts players could see the faces of friends wearing the opposing uniforms, the opposition far from an anonymous, unfamiliar challenger.

“You had two teams that really, really wanted to win, and tonight they scored more runs than we did,” Strawberry Crest manager Eric Beattie said. “Our guys fought hard and they left it all out on the field. Tonight, they were the better team. But my guys are competitors and I love them.” 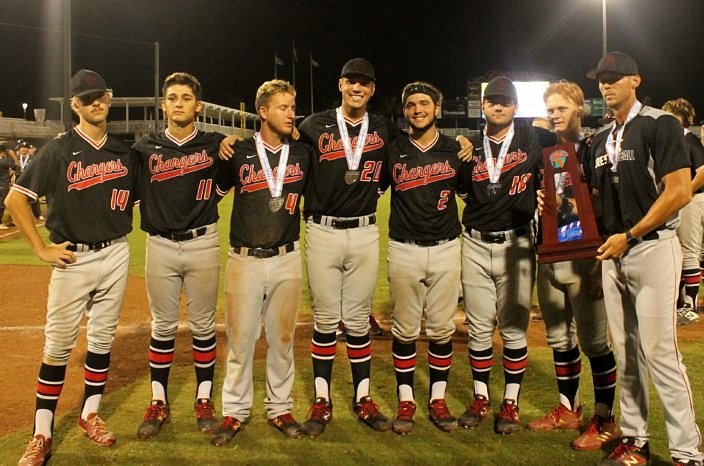 Strawberry Crest manager Eric Beattie and his seniors with the runners-up trophy awarded to the number two team out of seventy teams in Class 8A.

The Raiders wasted little time in taking control with two runs in the bottom of the first inning. With two outs, Cole Cothren deposited a base hit into shallow center field, Messick walked and Hunter Emerine was hit by a pitch to load up the bases for the hot bat of designated hitter Tyler Dowdy. Dowdy delivered again by jumping on the first pitch he saw and blasting it to right field for a two-RBI single that gave the Raiders a 2-0 lead.

“Once we had that lead I had a lot more confidence than going in a 0-0 game,” Raiders starting pitcher Jarod Wingo said. “The moment that happened in the first inning I had so much confidence, which got me through this game.”

Wingo impressed on the mound, going the distance for the victory. The junior right-hander allowed just three hits and did not issue any walks, while picking up five strikeouts. He needed just 77 pitches to go the full seven innings, and the lone run surrendered was unearned. 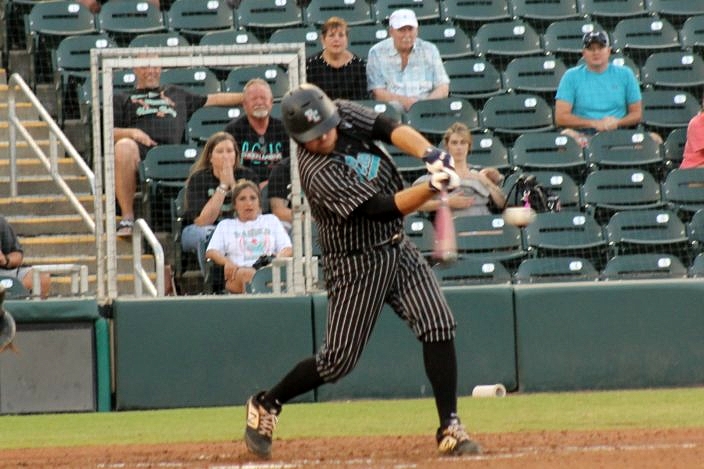 Plant City’s Tyler Dowdy connects for a two-RBI single that drove in the winning runs in the bottom of the first inning.

“I knew I had this ball a week before when Parker was pitching, and it’s all just a mentality preparing for the state championship,” Wingo said. “We’ve never been here before, we don’t know the feeling and we don’t know the energy. It was something else that I’ve never played with and I just prepared in the bullpen, I got my mind straight and nothing came between. I did my job.”

Cothren ignited another scoring threat in the third, leading off by rocketing a shot to center and then hustling into second base for a lead-off double. Messick then drew a walk that prompted a call to the Chargers’ bullpen for reliever Jacob Heath, who quickly induced a ground ball that the Strawberry Crest defense converted into a 6-4-3 double play. Dowdy was intentionally walked and Casey Mawhinney also worked a walk that filled the bags, but Heath got a called third strike that quelled that threat.

“One thing I had to do as a coach was to control their emotions, because emotions can get the best of both teams, and it did,” Raiders manager Mike Fryear said.

The Chargers cut the lead in half with a run in the fourth. Tanner Kelley reached on an error and next advanced to third when Kade Manderscheid sent a roller back to the pitcher for a 1-3 ground out. Ben Pues then put a charge in the ball deep to left field for a sac-fly RBI that made it a 2-1 ball game.

Heath kept things going by connecting for the Chargers’ first hit with a ground ball to center, before being replaced on the bases by courtesy runner Caleb Weaver. Joseph Parillo found a hole through the right side to put the go-ahead runner on base, but Wingo got a called third strike that shut the door on that rally. 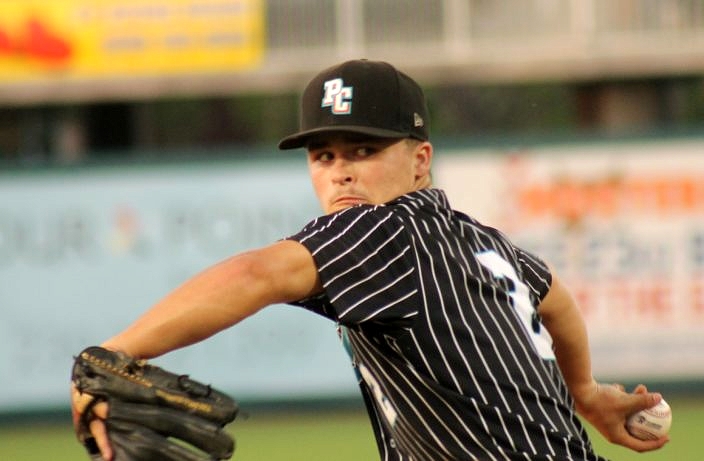 Jarod Wingo went the distance on the mound to earn the 3-1 win for Plant City.

By his own evaluation, Heath was not satisfied with his relief pitching performance in Wednesday’s semifinal victory. Back on the hill in the finale, the senior did a great job of holding the rope. Facing the heart of the Raiders’ order in the bottom of the fifth, Heath’s coaches had the confidence to call pitches that attacked and challenged those hitters. Heath rewarded that confidence by retiring the side in order, striking out two of Plant City’s most fearsome hitters.

“Jacob Heath threw the ball as well as I’ve ever seen him throw tonight,” Beattie said. “He left it all on the field and did everything he could to help his team win.”

The following frame the Raiders struck again and added a valuable, unearned insurance run. Casey Mawhinney walked to start the inning, but was erased when Heath picked up a sacrifice bunt from Wingo and fired in time to erase the runner heading to second. Cade Shissler connected for an infield single that then resulted in a throwing error that allowed pinch-runner Jace Stines to race home and score. 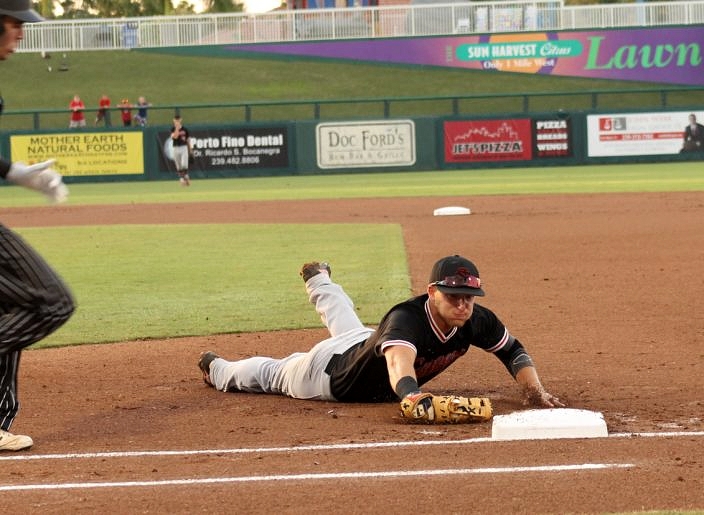 Strawberry Crest first baseman Tanner Kelley dives to make an out ahead of the runner. Kelley also reached base twice and scored his team’s only run.

After Wingo carved his way through the last three batters, the final out was recorded and the celebration began. Players dogpiled and celebrated and the seniors were also presented with their caps and gowns, having missed their own graduation in order to instead play in the title game. The journey finally complete, the sweet taste of victory satisfied all the struggles it took to earn it.

“Since we took over the program seven years ago, I always told the alumni we were going to be winning this. We did it,” Fryear said. “They’ve known each other forever, and that is what makes it even better to share that trophy even with those guys. They are class acts over there and I am good friends with Eric Beattie. But all our hard work finally paid off, all the fall workouts, running and all the little details of the game. These guys deserve it.”

The 2019 season will be one the Plant City Raiders will always remember. The team won 30 games to go with the state title, and finishes the year on an 18-game winning streak. The Raiders also became the first team to celebrate their victory with a triple backflip, masterfully executed by sophomore Demario Williams.

“It’s a special group, from the freshmen all the way up to our seniors, our JV program, our coaches, our administration, our community. You just look at the crowd that is here, and this is our graduation night. It’s an awesome atmosphere. I couldn’t be happier,” Fryear said. 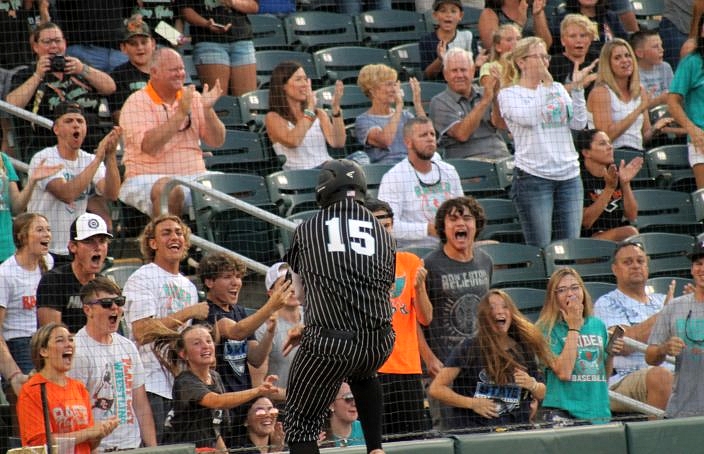 Parker Messick celebrates with the fans after scoring in the bottom of the first inning with the winning run for Plant City.