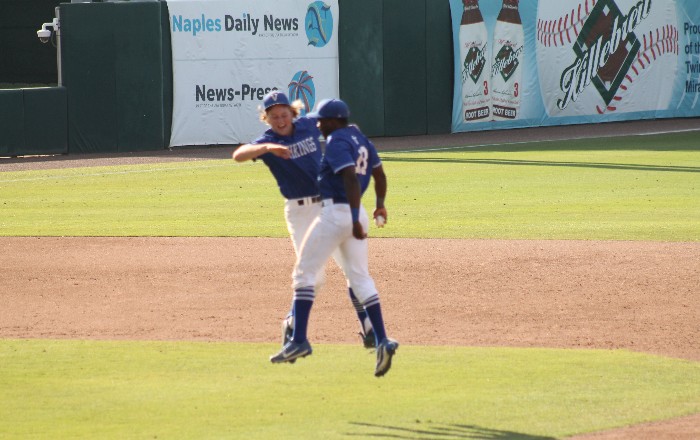 The Vikings leap for joy after earning the win to become state champions, with center fielder Jovanni Canegitta clutching the ball in his hand after catching the last out.

The Lakeland Christian Vikings are the 2019 Florida Class 3A state champions.

Even hearing the words there are many that might not believe them. For the past three seasons the Canterbury Cougars have dominated 3A, and they were back in the state championship game again on Saturday. Meanwhile, no team from Polk County had won a state title in any sport since way back in 1995.

That is the true magic of this Vikings team: they defied all odds because they refused to believe any history about them that they did not write themselves. They dictated the outcome by playing some of the finest baseball they could, and that ending was a 3-1 victory over Canterbury in Saturday afternoon’s state championship at Hammond Stadium in Fort Myers.

“I’ve been here for a lot of years and I’ve been waiting for this moment for a long time and for it to finally happen, I cannot even speak about it,” senior Jovanni Canegitta said.

Cade Kotny threw a complete game and the Vikings scored all of their runs in the bottom of the second. The two sides both competed at a high level befitting of a title game, and it was baseball at its very finest.

“We talked yesterday about what our approach was going to be, and I think we stuck with the game plan and these guys took care of it,” Vikings manager Blane Fox said. “They played Viking baseball; they played great defense, Cade threw strikes and when he got in trouble he kept throwing more strikes. We did have an error but it didn’t change the momentum of what we were trying to accomplish. They were a real good team, real disciplined and they had pressure on us most of the game when they got a runner on. I was glad that we could at least control what we could control.” 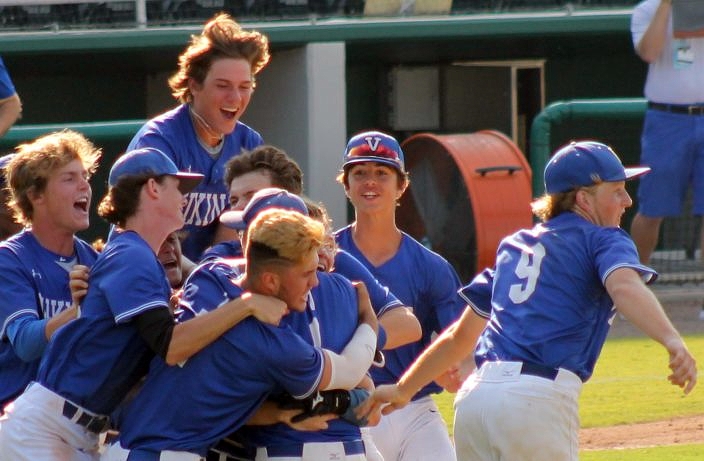 The Vikings dogpile in celebration of becoming the first Polk County state champions since 1995.

The Vikings (24-5) executed their game plan to perfection in taking the lead early, going up 3-0 in the second inning. Ryan Jenkins lined a lead-off single to left field, catcher Canaan Bennett walked and was replaced on the bases by courtesy runner Hunter Laurell and Ian Anderson reached on a slow grounder to third base that loaded up the bases. Two batters later, Canegitta did what he has done all season for his team by delivering a clutch hit up the middle that scored a pair. Jake Fox followed with an infield single to first base that plated Anderson to increase the lead.

“We knew it was going to take more than one or two runs to beat this team,” Jake said. “We just needed a little more cushion to make Cade a little more comfortable out there and make our defense feel comfortable to make plays behind him.”

Canegitta was a game-changing force in the Final Four, delivering the sort of performance one only dreams of. The center fielder went 4-for-6 with a double, a home run, a walk, three RBIs and two runs in the two games at the state tournament. Hitting out of the lead-off spot, Canegitta set the tone and was nearly impossible to stop.

“Every time I am up it seems he’s in scoring position and gives me a lot of opportunities for RBIs,” said Jake, who bats second behind Canegitta. “I know that if he gets on first, I am going to take a pitch sometimes and give him an opportunity to steal a bag and try to get into scoring position so I can hit him in.” 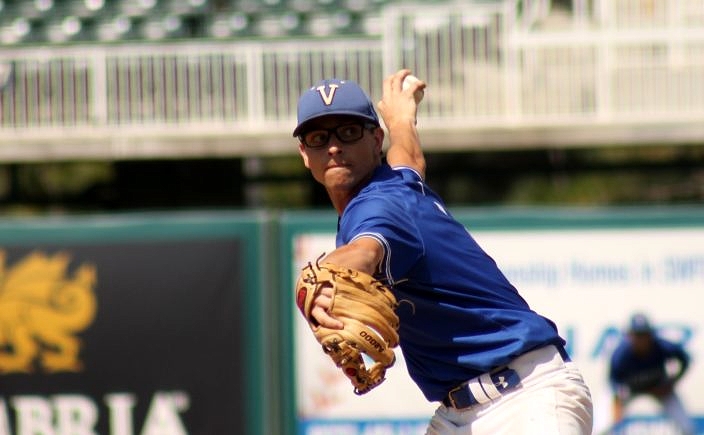 Cade Kotny went the distance on the mound to earn the championship victory.

The Cougars answered back and got on the scoreboard in the fourth. Will Cialone reached on an error and Bryce Einstein then sent a flare to left field for a base hit. A bunt from Aaron Gebig advanced the runners and Alex DeMarco got the ball on the ground for a 6-3 RBI groundout.

But the Vikings never let another Cougar cross the plate from there.

“There was no panic and we have been in those tight situations before,” Coach Fox said. “We play a lot of the bigger schools in Polk County and these guys just like to be in that moment.”

Kotny certainly showed no sign of panic on the mound, instead displaying excellent poise and composure. The right-hander needed just 86 pitches to go the full seven innings, and he scattered three hits and four walks, while recording two strikeouts.

“It’s just another game,” Kotny said. “Coach put the ball in my hands and I need to go out there and do what I do. I pitch to contact, I throw strikes and I trust my whole defense. I’m happy that we were able to come together as a team and show people what we really are about and what Lakeland Christian baseball is.” 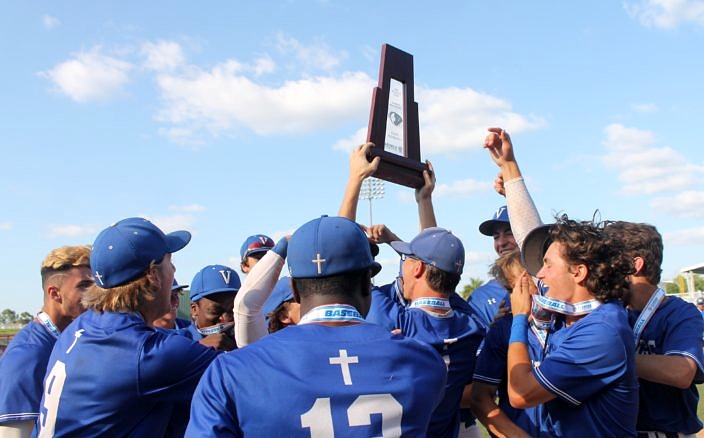 The champions receive their trophy.

The Vikings have been a team on the rise in recent years, and they held the number 14 ranking out of the 107 teams in the HSBN Tampa Bay Power Rankings in the final regular-season rankings. Coach Fox saw the difference along the way this year as they just continued to get better every game. The team eliminated mistakes, had better at bats, played solid defense, threw strikes and even threw the breaking ball for strikes.

“That can be very beneficial when you grind it out that way,” Coach Fox said.

The team agrees that the turning point began about two years ago, when the program added the final key ingredients.

“Two years ago we brought on two new coaches. Basically, God sent us a boat and a helicopter, and that is Mike Bird and Matty Diaz,” Coach Fox recalled. “It was a miracle is what it was. We met a guy who was a big-league player who was retired, and we started talking.”

Despite considering many other opportunities, both coaches came aboard and added valuable assistance. Confidence grew as the results showed on the field, and Coach Fox pointed to the club’s district semifinal playoff when it trailed 3-0 to Seffner Christian and was five outs away from the season being over. The players rallied to victory and never looked back.

Upon reaching the championship, Lakeland Christian rose above even the added pressure in possibly being the 23rd straight team from Polk County to walk away empty-handed. Instead the Vikings are victorious, and they ended a 24-year drought back home that makes it that much more special. So many of their peers in their community were rooting them on, and now they all can relish in the accomplishment together and enjoy the pride it brings to Lakeland.

“I’ve had many text messages from all our district coaches, and all the way up the ladder to Lakeland and George Jenkins,” Coach Fox said. “It is very cool to see that we’ve got respect now. But these guys earned it the hard way, the blue-collar way with work, work and work.” 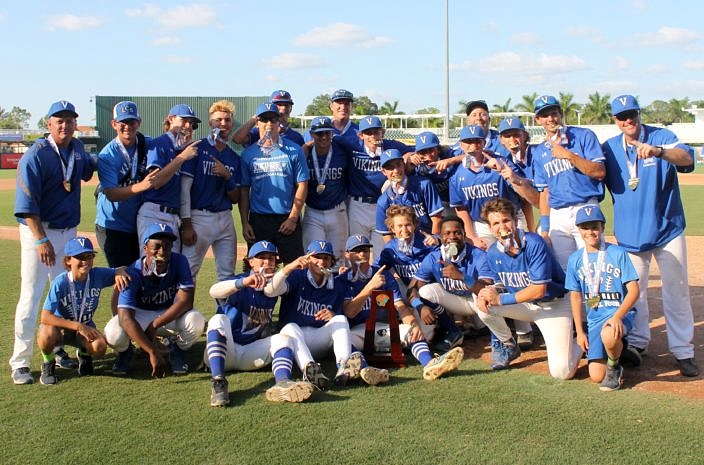