Dunedin Slugs Past Mosley To Return To State Title Game 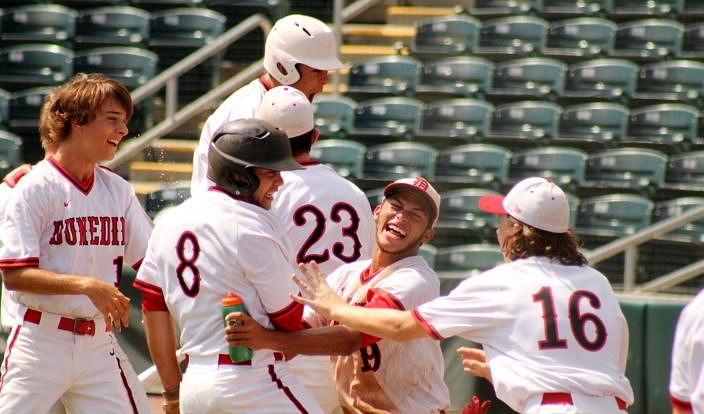 The Falcons celebrate after taking the lead in the third inning.

The Dunedin Falcons are right on schedule. Friday morning culminated in a moment that was years in the making, as the Falcons earned a 7-4 victory over the Mosley Dolphins in a 6A state semifinal at Hammond Stadium in Fort Myers. Playing in its second state semifinal in the past three seasons with much of the same personnel from that 2017 group, Dunedin broke through to advance to the state championship.

The Falcons (23-8) will take on the Jesuit Tigers on Saturday afternoon, seeking to add its second state title in program history. Dunedin won it all back in 2008, and now this current group of players look to cement their legacy as well.

“We’re coming for rings. It was nice to be here last time but we are going for the top prize,” Dunedin manager Ron Sexton said. “We knew at the time when these guys came in as freshmen that they were special, and four of them started in a regional finals game in 2016 as freshmen. Just having that experience, those were the roots. Having that experience and going that deep, you have so many other games than other guys. To have that kind of experience against tough competition and tough crowds is so valuable, and we are seeing the fruits of that pay off now. I didn’t notice any nervous twitches in the dugout.”

Making his second career start on the big stage at the state semifinal, Falcons starter Tyler Vogel earned the win. Vogel battled for his team into the sixth inning and working his way out of trouble nearly every step of the way. The right-hander allowed three earned runs on six hits and five walks, and he had one strikeout.

“It was tough. They are a good swinging team,” Vogel said. “All I had to do was dig deep, make my pitches and trust my catcher. I trusted my defense one hundred percent.” 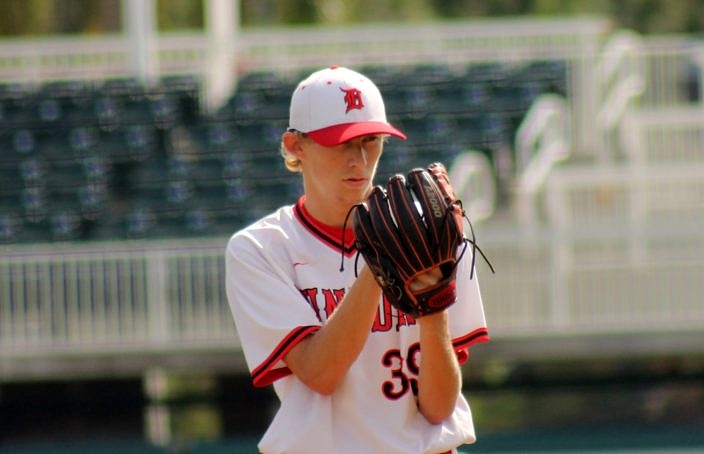 Tyler Vogel made the start and earned the victory for the Falcons.

Three runs in the bottom of the third put Dunedin ahead with a lead it never surrendered. With one out, Ray Sass put a charge in a pitch and sent it bouncing deep off the left field wall for a double. Catcher Tristan Morton worked a walk and gave way to courtesy runner Dominic Pineiro, and a walk to Jonathan Hubbard loaded up the bases. Connor Russell worked the count to draw an RBI walk that got the Falcons on the scoreboard, and Marcus Brodil broke things open with a liner to center that easily plated Pineiro and also allowed Hubbard to slide in just ahead of the tag at the plate.

“We’ve been here before and I think we were all relaxed,” senior captain Chris Johnson said. “We knew what we were going to see, what to expect and I don’t think anybody was surprised. I think that really played a huge factor in our hitting, because right off the bat we were putting the ball in play. We were doing that the whole game and putting hits together, and we got on top.”

Mosley immediately applied pressure by putting the lead-off runner on base to start the next frame, as Trent Justice started off with a walk. But Dunedin turned a smooth 4-6-3 double play to snatch the momentum right back.

The Dolphins swung the pendulum right back in their favor with their next swings. Brayden Gainey walked and Clete Hartzog laced a shot into the left-center field gap for an RBI double. Christian Lasecki followed by putting a sting on the ball and driving it deep to the left field corner, but Brodil had an excellent read and made a nice sliding catch to end the frame. 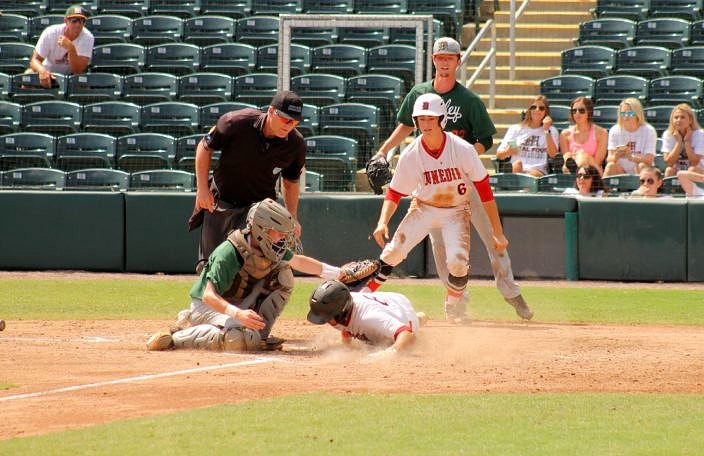 Jonathan Hubbard slides safely ahead of the tag to put Dunedin ahead 3-0 in the third.

“It just kind of happened,” Brodil said. “I just started running, but I thought the ball was going to be foul and I wouldn’t be able to get to it. But I got to it and that was about it. It was about two feet from going foul.”

The Falcons went right back to work at the plate with their next swings. Brock Cunningham walked on four pitches to get it going and Chris Johnson clobbered a shot deep over the right fielder for a double. Sass was hit by a pitch to again load up the bases, but the Dolphins benefited from a strange sequence of events that resulted in two outs. A grounder rolled to third, but the lead runner went back to third and was picked off, and then the trailing runner reached third but attempted to go home and got caught up in a rundown. A fly ball to center then closed that frame with no damage done.

“We knew that the heat would be a factor, and it was sweltering out there,” Sexton said. “We were here in 2017 and I told the kids that every year having been through this, we have preached and they have done the conditioning. But it affects your concentration, and I will put that on the heat. When you are out there sun-baking, your mind gets fried sometimes. It really took us out of some potential big innings, but what I liked is we were resilient. We really recovered from some mistakes.”

Mosley kept plugging away and threatened again after putting two runners on with one out in the fifth. Mason Smith singled to center and Drew Yeager walked to put some ducks on the pond, and an infielder grounder moved both runners into scoring position. But a screamer went right back to the glove of Vogel to end that threat.

That momentum carried right back to the plate to start the next inning, as both Russell and Jaydee Marks singled to keep applying the pressure. A wild pitch advanced the runners, and Brock Cunningham delivered another run with a base hit to left that pushed Russell across the plate. With the runner in motion heading to second, Johnson rolled a single up the middle to push Brodil home, and a throwing error let Cunningham also race home to make it a 6-1 advantage. 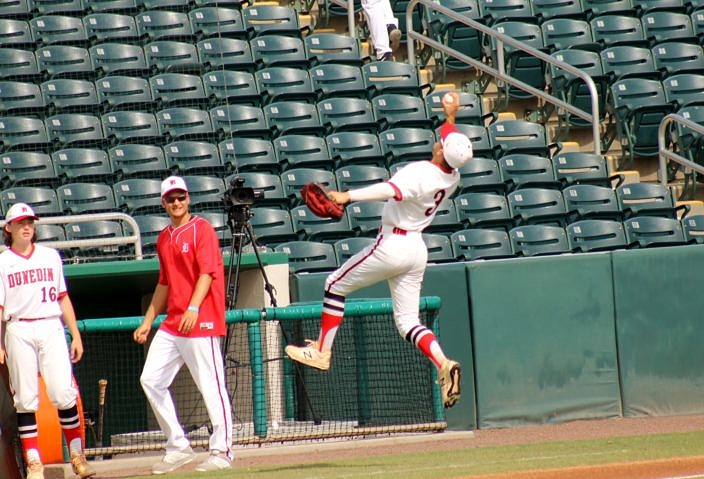 Brock Cunningham playfully leaps to catch a ball tossed up for him as he celebrates his big catch that stranded two base runners in the first inning.

Mosley finally succeeded in chasing Vogel from the mound by loading up the bases in the top of the sixth. Shane Skibba walked but was erased when Hartzog hit into a fielder’s choice. Lasecki supplied a base hit to left and Jaden Rudd also walked to fill the bags and prompt a call to the bullpen for Falcons reliever Mitch Mussler. Mason Smith greeted him by drilling a shot into the left field corner to drive in two runs, before Dunedin alertly recorded the last out by gunning down a runner on the bases.

The aggressive attack continued deep into the action. The Falcons put runners on the in the sixth, only to watch Mosley answer with a 5-4-3 double play that held Lake Fisher at third base. An intentional walk put Brodil on the other corner, and he initiated a double-steal that worked to perfection in allowing Fisher to swipe home.

“Momentum was a big part of everything. Once you get the momentum you can’t lose it,” Vogel said.

Now Dunedin looks to ride that wave of momentum for one last trip to the Promised Land.

“We’ve been together for three years and that has been a huge thing, especially in the postseason,” Johnson said. “We have a veteran team and a lot of older guys, but we’ve been together the last three or four years. We’ve picked each other up in the tough situations and we’ve really come together this postseason. If something happens that doesn’t go our way, it is like it never happened. Every guy has bonded together, and these bus trips have been great. That is where we get to know each other and that is where teams really get to form.” 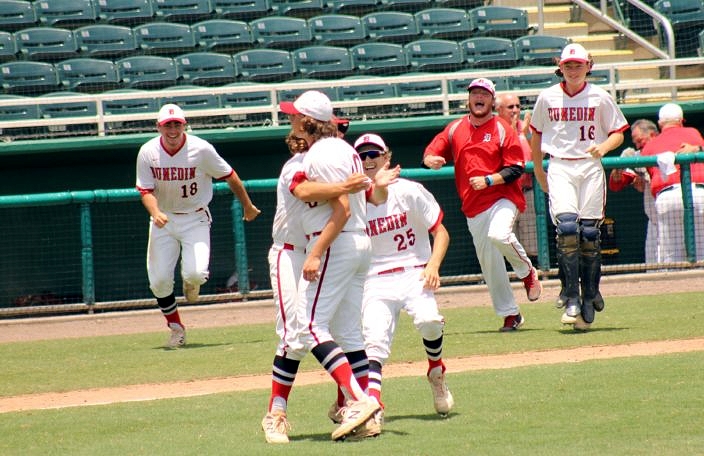 The Falcons storm the field in celebration after winning to advance to the 6A championship game.