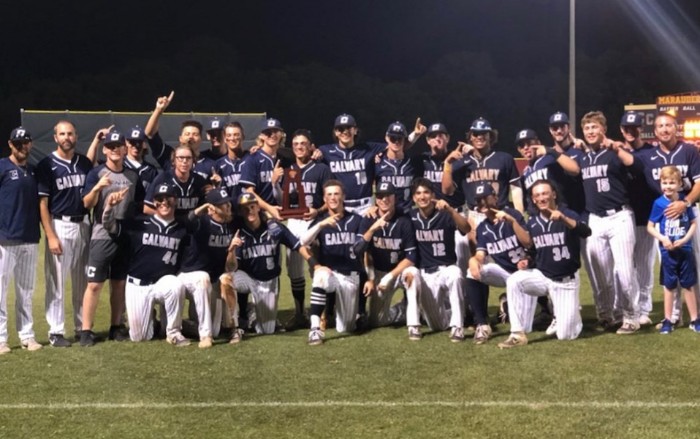 Over the past few seasons the Calvary Christian Warriors have controlled the title in 4A District 3, and on Friday night they extended their reign by capturing their third consecutive championship with a 10-0 win over the Berkeley Prep Buccaneers. Having gone on to the state tournament in each of the past two playoffs, the Warriors (22-4) will look to also extend that streak next when they serve as hosts on Tuesday in a 4A regional semifinal against the Trinity Prep Saints. The Bucs (19-8) also move on to the regional playoffs, where they will travel to take on 4A-3 champion The First Academy on Tuesday night.

Josh Emerson threw a complete-game shutout to lead Calvary on the mound. The senior right-hander allowed just two hits and issued four walks, and recorded four strikeouts. He improved to 7-0 on the season.

The Warriors grabbed an early 1-0 lead when Kyle Flynn scored on the throw following a single to center off the bat of Christian Cairo. Emerson made that lead hold up, and the offense erupted late with five runs in the fifth and four runs in the sixth that ended things via the mercy rule.

Vince Smith had a big day at the plate to lead the way, going 2-for-4 with a home run, two runs and five RBIs. Cairo, Sam Gordon and Pierce Chambers all had two hits apiece.

Tucker Fine was 1-for-3 with a double for the Bucs, who managed seven base runners all night but were unable to push any across the plate.