Sarasota Cruises Past Strawberry Crest To 8A Title Game 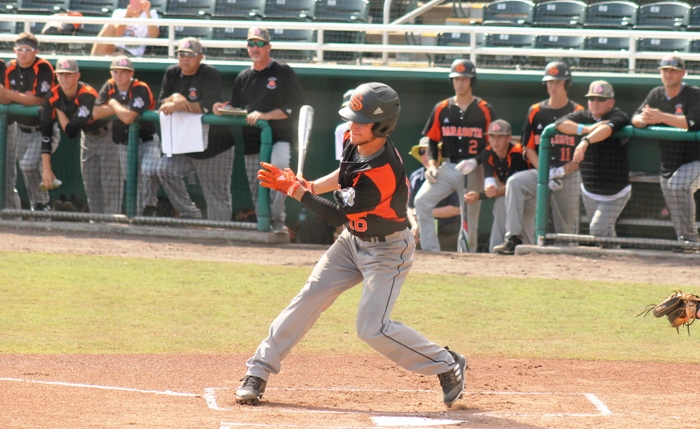 Michael Dorso puts the ball in play in the first inning for Sarasota. The center fielder was 2-for-4 with an RBI double and a run.

The Sarasota Sailors are no strangers to the big stage. Already with eight state titles as a program, the Sailors began their final push for number nine on Friday morning against the Strawberry Crest Chargers, in an 8A state semifinal at Hammond Stadium in Fort Myers. Taking on a Chargers squad that reached the state Final Four for the very first time this season, the Sailors played like the state regulars that they are.

Sarasota capitalized on every opportunity it received, scoring several unearned runs early on and then holding the line from there to secure a 5-2 victory. Strawberry Crest struggled defensively to the tune of seven errors, many of which ultimately proved too costly to overcome.

“They didn’t get here doing that, obviously,” Sarasota manager Clyde Metcalf said of the Chargers’ defensive woes. “I looked at the scoreboard midway through the game and they had five errors and we only had six hits. We weren’t always capitalizing on it, and we kept them in the game. I know they didn’t get here playing that way, but it was a major factor in the game. We got a lot of our runs off of their mistakes.”

Both sides came out swinging to exchange blows early on. Sarasota’s Nick Winkelmeyer started off the game with a single that ate up the first baseman, Michael Dorso reached on an error and Ben McCabe grounded into a double play that allowed Winkelmeyer to cross the plate. Strawberry Crest got it right back when Joseph Parillo was hit by a pitch and later scored on an RBI from Derek Barone.

The Sailors (19-12) went back in front with another run in the second. Jack Duffy hit a single to center, Andre James lined a base hit that was then misplayed by the defense, allowing Duffy to come around and score. The Chargers responded by turning a pretty, 6-4-3 double play to prevent any further damage. But all the momentum was with the Sailors, and, after falling in the same game a season ago, the team had a clearer feeling for what they had to do to close things out. 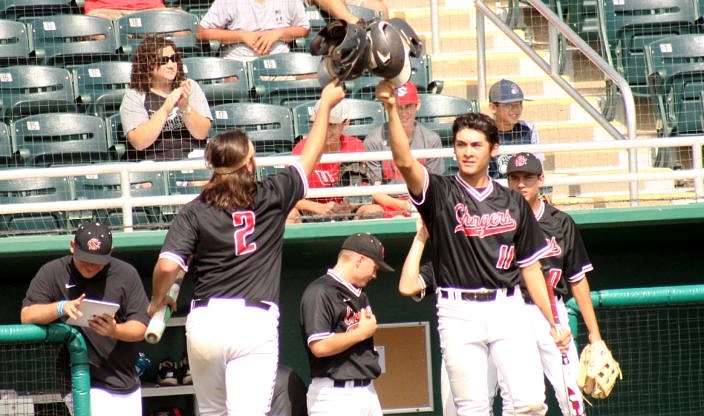 The Chargers celebrate after getting on the scoreboard in the bottom of the first.

“There are six guys on our team who were here last year,” Metcalf said. “I think that we’ve been able to lean on the guys that were here last year, and I think that it was good for our coaching staff as well. We did some things really differently this year when we came down, with our BP and our infield/outfield. We took some time to rest on the field and spent about fifteen minutes in the shade, because I honestly think that last year we wore our guys out. It is hot, and how important that is at the end of the season is an extra swing or an extra ground ball. So I think that experience did help us a lot.”

Sarasota kept adding on to its lead with runs in each of the next two frames. Dorso got it going again with an infield single, advanced on a balk call and then scored on an infield error in the third. He then supplied an RBI double deep over the left fielder’s head to push across Owen Ayers, after Ayers led off the fourth with a base hit to center.

Facing Chargers side-arm starter Brent May, the Sailors adjusted quickly to his looks to quickly find success. May featured a solid sinker and changeup that required the Sarasota batters to make the proper adjustments against him.

“I realized there in my first at bat that everything was going to be away, so I just moved up a little bit where I could hit everything out there,” Dorso said. “Fortunately for us, we got to capitalize on their mistakes. For me, I was able to put a little pressure on them with my speed. I felt that was part of it too; just get the ball on the ground and run as hard as I could down the line.”

Strawberry Crest (19-9) went to work getting back into it in the bottom of the fourth. Barone drew a lead-off walk, and Ben Pues also worked a free pass for ducks on the pond. Jacob Heath gave himself up with a sacrifice bunt that advanced both guys into scoring position, and Damien Torres supplied a base hit to center to make it a 4-2 ball game.

“There was no doubt in my mind that we were ever out of that game,” Barone said. “No matter how many runs they scored, I always have faith in my teammates and the ability they can do. I feel like we were always in the game.”

Another unearned run in the sixth further extended the lead for the Sailors to close out the scoring. Winkelmeyer walked, moved to second on a misplayed pick-off attempt, advanced to third on a passed ball and then scored following a wild pitch. 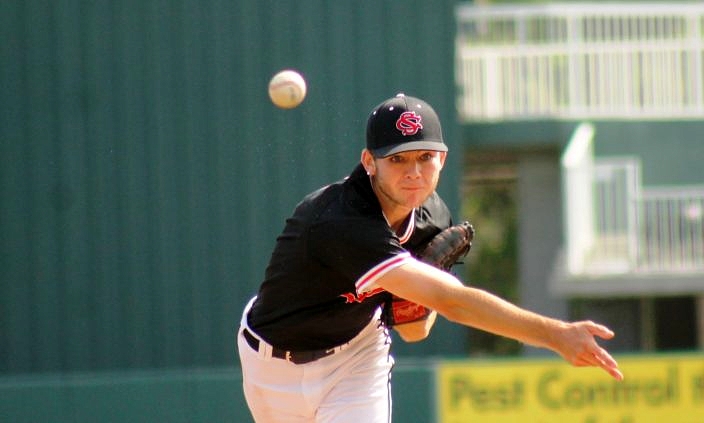 Brent May made the start and took the tough loss for the Chargers, despite allowing just two earned runs on six hits and a walk.

“All I know is that with this group of guys, I would go to battle with them yesterday, today, tomorrow and beyond,” Chargers manager Eric Beattie said. “Brent threw a heck of a game. He got us a ton of ground balls and gave us a ton of opportunities, and we made mistakes we don’t normally make.”

Although only a freshman, Sarasota starter Connor Whittaker did not pitch like one. The young right-hander relied heavily on his curveball to keep the Chargers off balance. After coming up from the junior varsity team to quickly earn a prominent role during the club’s playoff run, Whittaker delivered beyond expectations to save the rest of the pitching staff by going the distance. He struck out five, while allowing two earned runs on three hits and four walks.

While the Sailors survived to move on, the Chargers were left to reflect upon the greatest season in their nine years as a program. While the departing seniors have taken the Chargers as far as they could, they helped set a new standard for the team and paved the way for the success that may lay waiting ahead someday.

“This is great group of guys. We love to play the game and we just wanted to win,” Barone said. “We picked each other up, we had each other’s backs, and if somebody got out somebody else would get a hit. We just fell in this one, but this is still the greatest team I have ever played on.”

Beattie shares a close relationship and a world of appreciation for his players. Since they first started playing baseball at the school nine years ago, the team has only known one man at the helm. While the goal was to play one more game and try to plant the Chargers’ flag at the top of the mountain, falling just short of that chance does not diminish all that was accomplished this season.

“This is a huge stage, and our program is a young program,” Beattie said. “We’ve only been past districts one time. Not only for the players, but for me as a coach, this is new territory. I’m going to get a little better through this experience, and I know the younger players are going to get better from this. It’s huge for our program.”