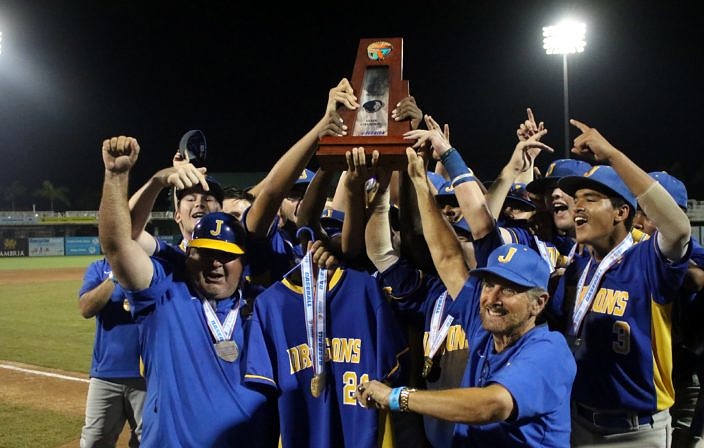 The Dragons finally hoist the championship trophy they have waited 78 years for.

It took nine innings to decide the victor, but it actually felt like 78 years. When Oscar Galvez put a swing on the ball and it found the grass, the Jefferson Dragons walked off victorious to enjoy a moment that was a long time in the making. Connecting for an RBI single in the bottom of the ninth inning, Galvez pushed across the deciding run that gave the Jefferson Dragons a 6-5 victory over the Merritt Island Mustangs in Thursday’s Class 6A state championship, at Hammond Stadium in Fort Myers.

“The first team was in 1940, and they have had some tremendous ball players over there, guys like Tino Martinez, Luis Gonzalez and Fred McGriff, but it had always eluded Jefferson High School,” Dragons Associate Head Coach Pete Scaglione said. “This was the year and we did it for everybody that wore the blue and gold the last 78 years.”

With things all knotted up in the ninth, Jefferson (22-8) strung some offense together to pave the way to victory. Jake Coleman walked and was replaced by Jaiden Duarte on the bases, who was then erased on a fielder’s choice that put Ty Evans on first base. Sal Vega lined a single to left and Galvez delivered the final dagger with a base hit to center that ended the battle and sparked the celebration. 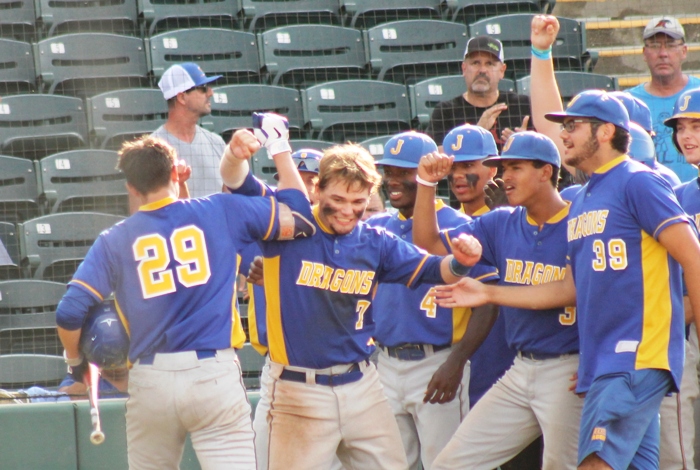 The Dragons celebrate with Robby Martin, following his solo home run that got the scoring started.

“We’ve been working hard for this, and it has been 78 years. So I had to hit the ball hard and just not think about it,” Galvez said. “He threw me a curveball in the dirt and I knew he would follow it up with the fastball, so I just stayed inside and hit it the other way. It hit the ground and I was happy and I was feeling it.”

Jefferson did not allow Mustang starter Chase Victor to settle in, as the Dragons sent seven batters to the plate and took a 3-0 lead with their first swings in the bottom of the first inning. Robby Martin capitalized on a 2-0 offering and sent it drifting high over the left field fence for a solo home run that got his side out in front and tasting a state title.

“With these group of guys, anything was possible and we knew it from the get-go,” junior starter Marc DeGusipe said. The left-hander transferred to the school this season, and it was a decision he could not be happier with. “This is a great group of guys and as soon as I came in I knew there was something special about them. I’m really excited about what we did.”

With momentum one their side, the Dragons kept it going to increase the pressure. Charlie Welch walked on four pitches, but was then erased as DeGusipe rolled into a fielder’s choice that erased the lead runner. Jaiden Duarte came in to run the bases for DeGusipe, Jake Coleman then walked, and both runners raced around the bases to score following a pair of defensive throwing errors.

The Mustangs (22-7) got one back in the top of the third. Mason Denaburg deposited a base hit into shallow right field and just out of the reach of several pursuing defenders. Victor then ripped a liner past third base and deep into the left field corner, allowing Denaburg to race all the way around the base for Merritt Island’s first run of the night. 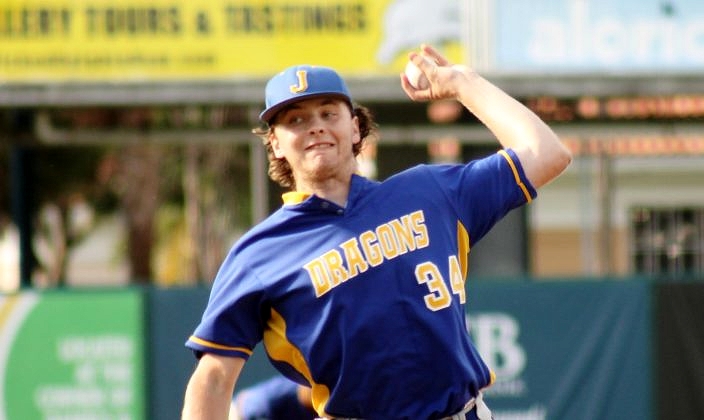 Junior Marc DeGusipe made the start on the mound and pitched into the fifth inning, but did not factor in the decision.

It took little time for the Dragons to seize the momentum back to their side of the field, as they immediately tallied another run in the bottom of the fourth. Sal Vega plunked a base hit into right field and Jack Rodriguez walked to put some ducks on the pond. Andrew Mathis then sent a liner shooting into left field to send Vega around third and across the plate.

With things beginning to get later into the action, Merritt Island amped up the pressure to turn things into a shootout. Nick Avdellas drove a shot deep to left just out of reach of the diving outfielder, which sent him racing around the bases for a triple in the fifth. Denaburg then sent a roller up the middle to easily drive Avdellas in to make it a 4-2 game and cut the deficit in half.

“Merritt Island was a really tough, hard-nosed team and they were well-coached,” Scaglione said. “It was tough to coach against them and second-guess what they were going to do. I never spent as much time in a game planning inning-by-inning, but that’s what I did. We just tried to keep a calm atmosphere and keep these guys up.”

With their fans and dugout ignited, the Mustangs seized their moment and grabbed their first lead of the night. Victor walked to provide another base runner and Kyle Dentmon singled to left to knock in Ryan Taylor. Ricardo Diaz followed with a shot to center that drove in a pair to give his club a 5-4 edge.

It was then Jefferson’s turn at the top of the seesaw, as they returned fire to even things back up in the bottom of the fifth. Ty Evans reached on an error, advanced on a passed ball and then made it a 5-5 contest when Oscar Galvez rolled an RBI single past third. 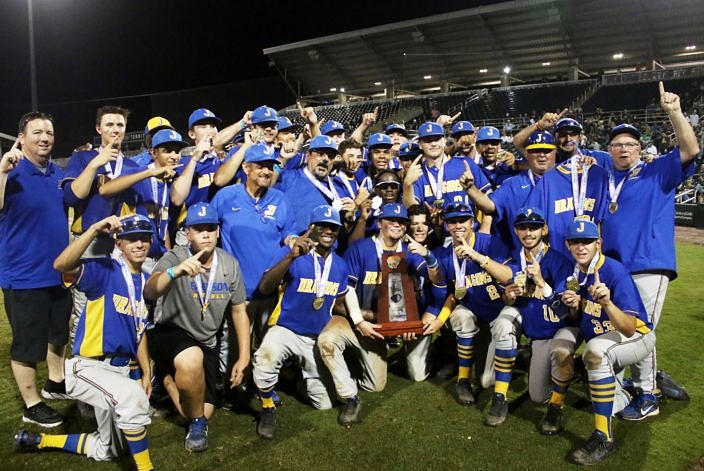