The George Jenkins Eagles on the field at the National High School Invitational in Cary, North Carolina.

Anybody can start anything, but champions always finish what they started. This is the mindset that has evolved throughout the George Jenkins Eagles baseball team. The program has continually grown over the past five years under manager Chad Crosby, and the Eagles recent performance in the National High School Invitational at the Major League Baseball Spring Training Complex in Cary, Nroth Carolina, has opened many more eyes all over the country. Being a rare public school in the tournament, the Eagles went 3-1 and nearly downed the two-time champs to make a run at the title themselves.

Jenkins is ranked second in the Tampa Bay Power Rankings behind only undefeated, defending 4A state-champion Calvary Christian Clearwater, and the Eagles jumped up to third in the HSBN state rankings. Jenkins fell a game short of reaching the state Final Four a season ago in falling in the regional finals, and the team has returned hungrier than ever with a 13-2 record and a roster full of talented, versatile ball players.

During the NHSI the team adopted the rally cry #WeBelong, and the Eagles quickly became a fan favorite to unseat some of the most established and most recognized high school baseball programs in the country. These are gratifying days for Crosby and the team, after all the hard work over the past five years that has helped bring the program to this level.

“I am definitely not a genius, but these kids have followed what I have set out, and then they followed the lead of the upper classmen who have been doing it for years,” Crosby said. “It’s kind of the expectation here, and if you don’t like to work hard try to find a different school to go to. If you want to win and you want to work hard and you want to go to college, that’s what we do here.”

Baseball is important to the community in Lakeland, and the Eagles have found themselves as sudden celebrities. It seemed the entire city of Lakeland was following the action and rooting for the team during the NHSI, and there were also between seventy and one hundred locals that came and rooted for the team in person.

“It seemed like they were all following it pitch-for-pitch, and we had a teacher who came up and he enjoyed every game and said it was the best Spring Break he ever had,” Crosby said. “He was so excited and on pins-and-needles at different times throughout the games, traveling with us and posting things on Facebook and Twitter. The feedback and the support we got from the community, seeing that was unbelievable. He was telling me, ‘All of Lakeland is watching you right now’, and they could not wait to see how we did by the last day. They said we really helped put George Jenkins and Lakeland on the map, and we were the first team from Polk County to ever be there.”

While this experience will be cherished and remembered forever, what cannot be forgotten is that this is only the beginning. The team is looking as dangerous as any to make a deep playoff run this year, and the response from the NHSI organizers is that they are welcomed and heavily encouraged to return to the tournament again in future seasons. The program name is getting around and becoming known in all baseball circles. 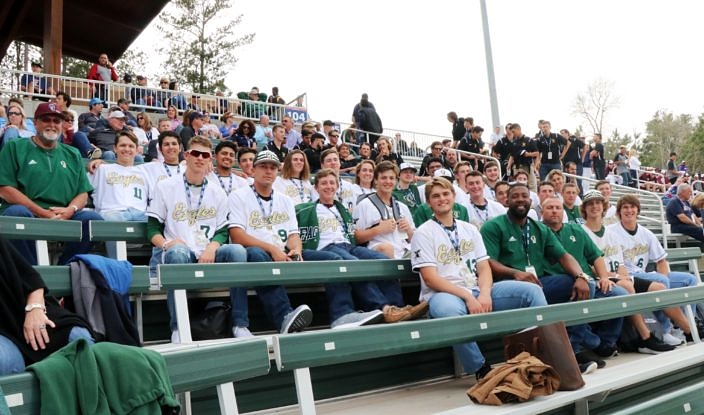 The Eagles enjoy some baseball together at the NHSI between their own games.

“It is not about winning a state championship. There are so many things that have to happen along the way, but my goal is to build a nationally-ranked program,” Crosby said. “That means that you’re not just good one year, but you’re good every year. The NHSI is the culmination, and it is that tournament where you want to earn that national scale. To be at this stage in five years is awesome, and it just goes to show all those hours that I stay away from my family, or that my coaching staff puts in, it shows we’re doing something pretty good over here.”

The entire process starts with JV guys in the summer. Those younger players work out five days a week, three days a week they are swimming at the YMCA, and then they go to the gym and work out. Two days they do field work and run hills like it is boot camp, flipping tires, carrying sledge hammers and flipping tires up hills. It is a very intense workout and suddenly these guys find themselves adding 25-30 pounds of muscle and are in the best shape of their lives. That is only the beginning.

“Coach Crosby spends a lot of time with us, and especially in the offseason going to the YMCA doing swim-training and weight lifting,” senior, four-year starter Brady Allen said. “That’s definitely been a key part. Then we come out and do agility and speed training. We just become bigger, and stronger and faster and just better overall than the other team.”

The Eagles are known for their stature just as much for their talent, which is just another example of the recognition they are earning and reputation they have created and are living up to. Yet there is never time to sit back and feel content, as their peers at the NHSI reminded them.

“We typically look physically like a college team when we get off that bus, but when we got to the NHSI we were definitely not the biggest team, nowhere near it,” Crosby said. “That really opened a lot of guys eyes to the point that there is a whole other level that they see now. Now the juniors and sophomores that we took have an added incentive to get busy.”

Not that the Eagles were overly concerned with their opponents. They have excelled by allowing the individuals to do things within their individual routines, and rather than conduct a synchronized warm-up stretch or carry themselves like a military unit they let the baseball on the field reflect what they are when they are playing baseball together. 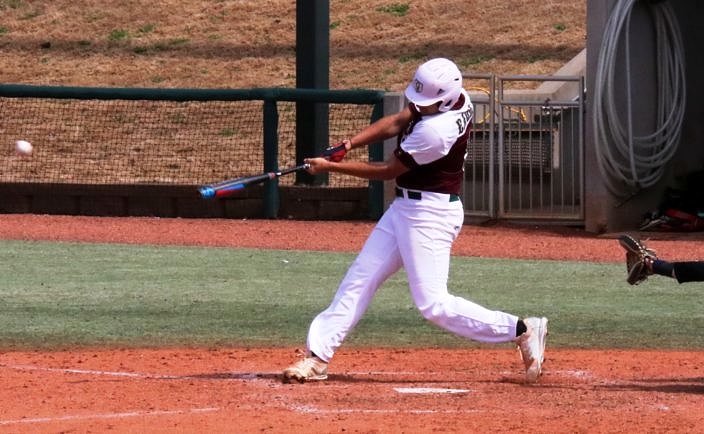 Senior Brandt Sundean went 7-for-11 with two doubles and five RBIs during action at the NHSI tournament.

“We did what we thought we were capable of and went out there and won games,” Allen said. “It was definitely reassuring, and it’s not like it was a confidence-booster, it just showed us what we can really do and how far we can go against the best in the nation.”

The players and coaches work outstanding together. The coaching staff has so many different personalities that they can interact with every single player. Most of the coaches have been with Crosby since the beginning, or even longer. The staff consists of Hitting Coach Cris Allen, Fielding Coach Alex Angulo, Defensive Coach Joel Frazer, Pitching Coach Ben Ally and longtime Assistant Coach Tim Shields, who has been on staff for all 25 years of George Jenkins baseball.

That camaraderie stretches right down to the players, which was also reflected in the enjoyment they had all with one another during times of the trip spent off the baseball field out at dinner or enjoying another game together. Not all of the guys have been on the team through this entire process, but the way they run together like a family one would never know.

“Coming in, I didn’t know how guys were going to react to me and how it was going to be,” said junior Daniel Batcher, who joined the team this year. “They really just accepted me with open arms and made me part of the family, so being up there and everyone having a good time really meant a lot to me personally. It felt like we actually were a family. It brought us closer and made our games more lively. We were in there talking it up a lot and getting everyone else into the game as much as we could, but being together on the field after the good time we had, like at Dave & Buster’s, made everything more compact and closer.”

While the team truly functions as a family, what sometimes gets lost in things is the sacrifice coaches make during baseball season in being away from their own families so much. Coach Crosby jokes that his wife, Erin, is a single mom from January to June every year.

“I couldn’t do what I do if I didn’t have her at home,” Crosby admitted.

With their own flock safely in the right hands, the coaches tend to their surrogate children in the program. Coach Crosby has made a habit of spending extra time with his players as they need it, often taking a player out to dinner for a real conversation and a chance to open up and try to find some help through the trials in life.

“Whenever we need someone to vent to or just someone to talk to about life in general, he’s the person we go to,” senior Brandon Howlett said. “It doesn’t really have to be about baseball; it can be about your future and something in your life off the field. I have gone to him a couple of times and he really just helped to calm me down and really look at what was going on. We love him to death and we’ll do anything for him, and it’s probably the reason why we play so hard.”

Several members of the team celebrate a win together earlier this season.

Another byproduct of all that hard work is the future it carves for themselves and for future players in the program. Close to 90% of the kids have gotten scholarship offers the last few years, and the program is quickly becoming known by college scouts to develop the type of players they are after.

“The gratifying thing now is that college are calling me and telling me that they want to recruit my guys because they know how to win,” Crosby said. “That is the ultimate compliment when the colleges say I want to recruit and fill my roster with your guys. They know the kind of product that we develop and they’re all wanting that, because those kids know how to play and they know how to win. That’s really cool when it comes to a public school. I can say that all I want, but it is nice that other people see that. Maybe we are doing the right thing.”

The memory and emotion that will forever stand out from the NHSI trip this year is the intensity and brotherhood the players expressed for each other. It was a big moment for their program and a huge experience for each of them individually, and it is that much more gratifying knowing that how they conducted themselves made all the difference in creating such an unforgettable experience.

“We’ve put in countless hours of work day in and day out, and just with Spring Break we could have easily just chose to hang out and go to the beach with friends. But we sacrificed our time to go play baseball in Cary,” Howlett said. “We’ve all put in the work, and to see it pay off this year, there is no experience like it.”