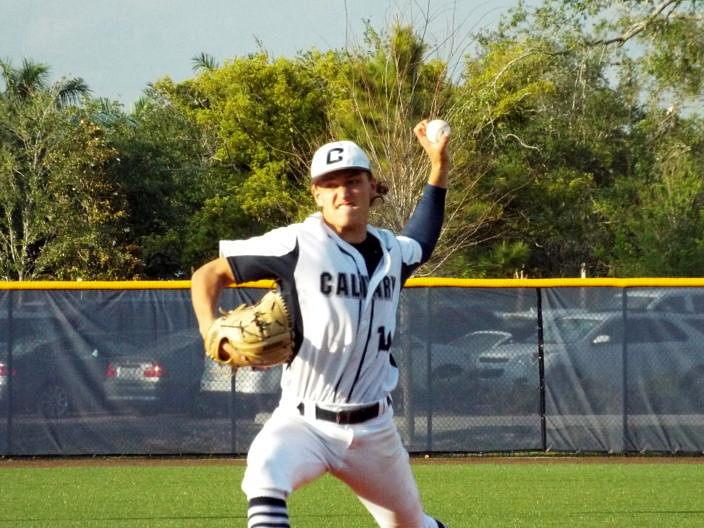 The First Academy Royals gave the Calvary Christian Warriors all they could handle Tuesday night, but in the end, the special season for the Warriors rolls on with a 3-2 victory over the Royals in the 4A regional championship. With the game knotted at two, and runners on first and second, a perfectly-placed bunt from Marco Benedettini drove in the go-ahead run for the Warriors in the bottom of the sixth. Graham Hoffman came in and closed the game out in 17-pitches in the seventh, and the Warriors storm into Fort Myers undefeated.

“I’ve been here all four years just waiting for this moment,” said Benedettini. “This team is truly different; that’s what makes it really special for all of us. We bond like no other team and we know whenever we get behind we are not going to lose.”

Nolan Hudi dominated on the mound for the Warriors (28-0) to the tune of nine strikeouts in six innings of work. Hudi allowed two runs, one earned, on just three hits. The stellar performance was needed when runs were at a premium for both teams. Twice in the game, the Warriors loaded the bases but didn’t capitalize. 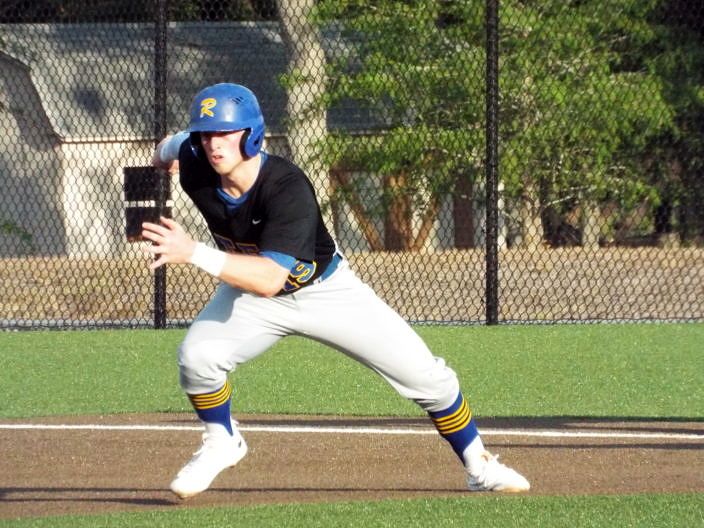 Cash Case reached base twice with a hit and a walk. He also scored a run in the loss.

Hudi found himself in a jam of his own with the bases loaded and one out in the top half of the sixth. After a hit batter drove in the tying run for the Royals (23-5), Hudi kept his composure and got the next two batters to strike-out swinging to end the inning and open the door for Hoffman.

“This is incredible,” said Hudi. “This is a feeling we have been waiting for all year. The chemistry this team has can not be measured by a statistic. Our stats are great and everyone keeps coming up in the clutch, but the chemistry can’t be calculated and that’s what has got us this far. They started to rally there at the end, but that’s what good teams do. They have a great team over there and we never doubted they were going to make a run. I think everyone had my back out there. They have done that all year. When we have each others back, there is nothing that can stop us.”

The Royals got a strong start from sophomore Joseph Charles, who went four innings, allowing just one run on two hits, striking out five. Kyle Holden drove in the only two runs on a 1-for-2 night. Cash Case and Raymond Fields tallied the other two hits for the Royals, who unfortunately failed to capitalize on a bases-loaded opportunity late in the game. 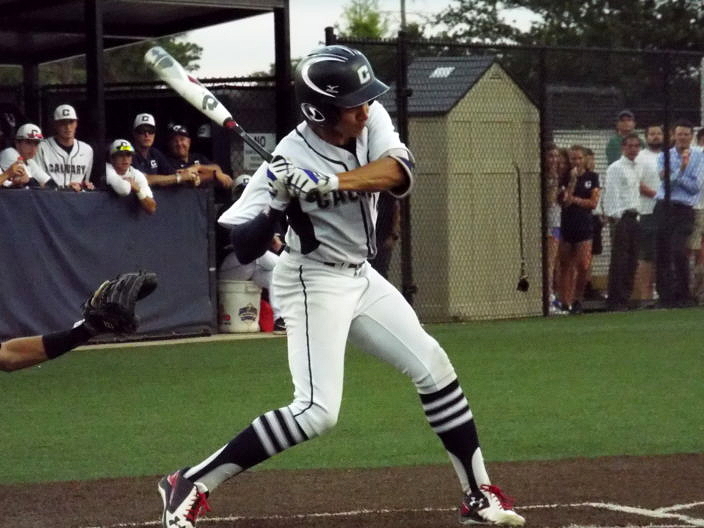 Christian Cairo takes a swing on a hard thrown pitch from Raymond Fields.

“It’s just always tough to lose the last game of the season, but someone always has to do it,” said Royals’ manager Scott Grove. “I am real proud of these guys. It’s awful tough to see the seniors go, but four of the five are going on to play college ball and we wished them the best of luck moving forward. We have a lot of young guys coming back, including all of our starting pitchers. We are going to try and build off this and move past this game next year. You have to tip your caps to Calvary, they did exactly what we thought they would do. They win a lot of close games and we hope they can continue what they are doing and finish off an undefeated season and win a state title.”

Eric Kennedy and Cavan Ingram both tallied RBI’s for the Warriors. Kennedy did so on a 2-for-3 night. Hudi also added a hit on a 1-for-4 night and Justin Bench went 1-for-2. Richie Mize scored twice for the Warriors, including the game-winning run in the sixth.

The Warriors now turn their attention to the final leg in the journey. Sitting at 28 wins and zero losses is special. But to finish off the quest for an undefeated season with a State Championship would be something truly remarkable. The final lap begins next week for the Warriors as they chase history.

“The camaraderie on this team is huge for us,” said Warriors’ manager Greg Olsen. “It comes down to trust with us. Our guys trust each other and I have never coached a group that has been this close. These guys love each other. They come back to the dugout and pick each other up and that’s why I feel in the tough situations, we are going to get out of them.” 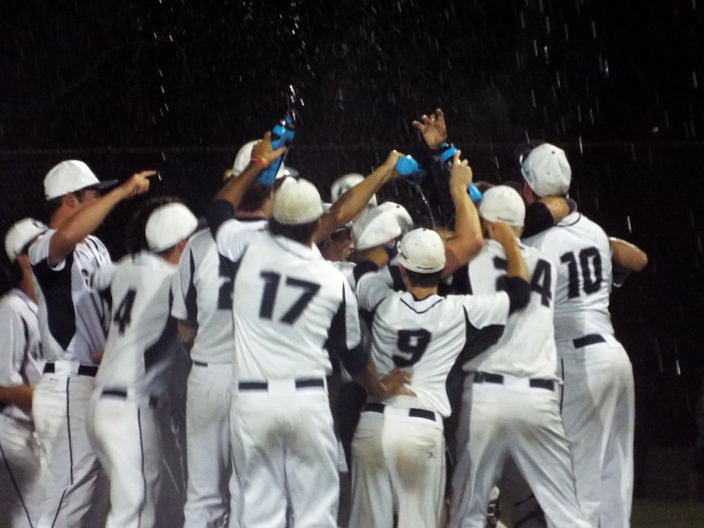