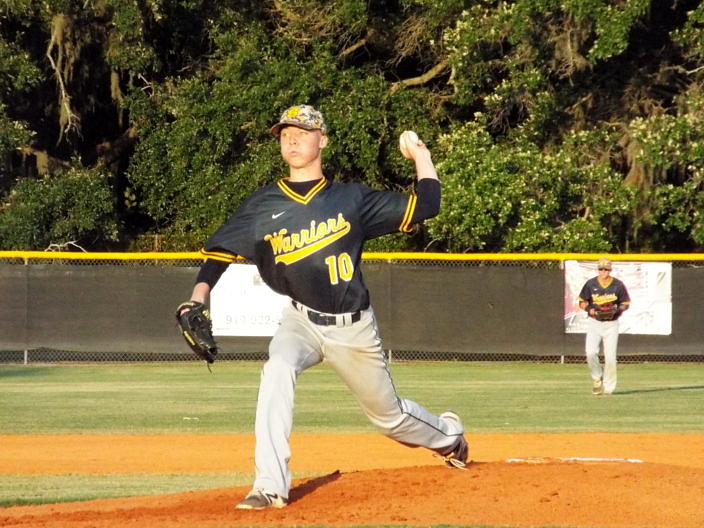 The Steinbrenner Warriors got one step closer to a return trip to Fort Myers for the state tournament Tuesday night. After watching a three-run lead vanish, the Warriors went to the final frame all knotted at 3-3 with the Riverview Sharks. With two outs and the bases loaded, CJ Van Eyk took a 1-2 pitch and launched it into to deep center-field, driving in two. The Warriors added another run for a 6-3 victory that send them into the regional semifinals.

With a man on second and two outs in the seventh, the Sharks intentionally walked Cam Coakley to put runners at first and second. Justin Turk singled during the next at-bat to load the bases for Van Eyk. After falling behind the count, Van Eyk sent a blistering shot to center to drive in Lala and Coakley to regain the lead. Turk came home for the sixth run of the game on a wild pitch later in the inning.

“I was sitting on his curveball and, fortunately for me, he hung it,” said Van Eyk. “We are not trying to think too much about last year. We have a very different team this year. We are trying to keep our heads down and take it one game at a time. The leaders on this team help guys like Huston Richter keep his head right as he is going to pitch all of these regional games. It’s been a huge help for us to keep his confidence level high and have him ready to go.”

The defending 8A state champion Warriors (16-9) got off to a fast start when senior Jordan Lala led off the top of the first inning with a solo shot over the center field wall. Van Eyk drove in his first run of the game later in the inning as the Warriors opened up a three-run lead on the host Sharks. 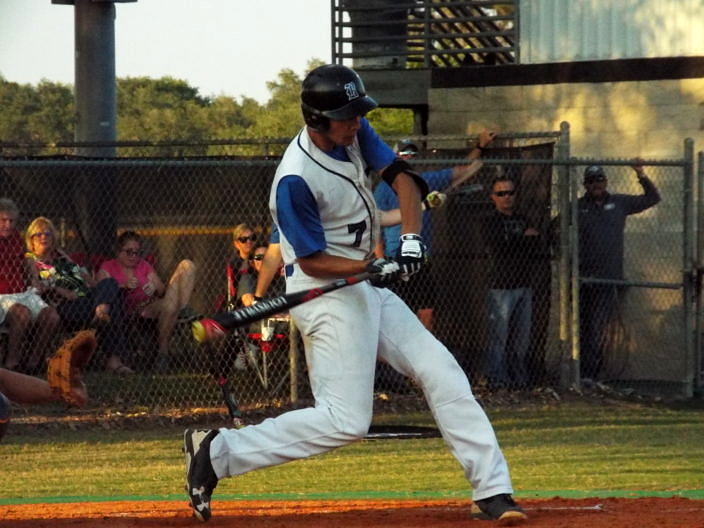 “I wasn’t trying to do too much at the plate,” Lala said. “I had two strikes on me and I just choked up and I was able to square the ball up and got the team going. They’re a good ball club at Riverview. We knew they were going to come out and hit and we just needed to play good defense and not make errors.”

Eventually, the resilient Sharks (20-7) battled back. After failing to score with no outs and runners on base earlier in the game, the Sharks pulled to within one in the bottom of the third inning. Tyler Solomon led the inning off with a single and, two batters later, Freddy Tarnok came to a plate and launched a two-run shot deep to center to send the home crowd into a frenzy.

Solomon’s triple with two-outs in the bottom of the fourth tied the game but the rally ended there.

“Those guys in that clubhouse did a real good job all year long,” said Sharks’ manager Bill Leiby. “They were resilient all year long. There is nothing to hang their head about. This is what you want to do and that’s get yourself in the postseason. When you do that there is only two things that can happen: you either win your last game or you lose it. That’s the only outcome and you try to hope for the best for the boys. I know they have worked their tails off to get here and sometimes the breaks just don’t go your way.” 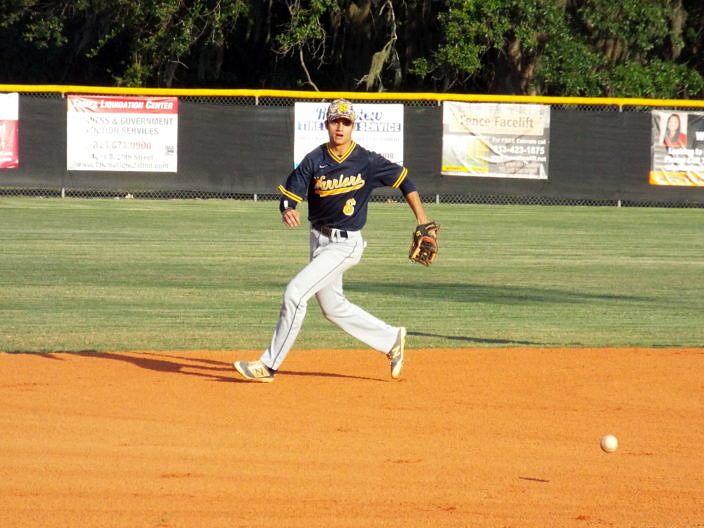 Anthony Cassos makes a play in the field in a solid defensive showing for the Warriors in the 6-3 win.

Huston Richter started the game for the Warriors and went five innings, allowing three runs and striking out one. Richter turned the ball over to Zack Zayas in the sixth, who returned to the mound in the seventh with the lead. Zayas set the Sharks down in order in the bottom of the seventh to close out the game and pick up the win.

The Warriors now set their sights on the Plant Panthers, who they are winless against in three tries this year. In order to survive and advance to their second straight regional final, they must overcome their biggest obstacle of the year.

Warriors’ skipper John Crumbley and the team are eager for one more shot at Plant.

“We go one game at a time this time of the year,” said Crumbley. “We are happy to get another chance at Plant in the regional semifinals. It means that two teams from our district are in the regional semifinals. We played a pretty solid game today; our pitching wasn’t awesome but it was pretty outstanding. We got a good scouting report and the kids jumped on it early. At the end of the game we were able to get those runs across. We just want to play good baseball and we really haven’t played Warrior-style baseball. Tonight, we did better. We still had some bunts that we didn’t execute and we had some missed signals and this isn’t the time of year for that to be happening. But the kids played hard and hopefully that carries over.”