Lakewood Ranch Advances To 8A-8 Finals Against Sarasota 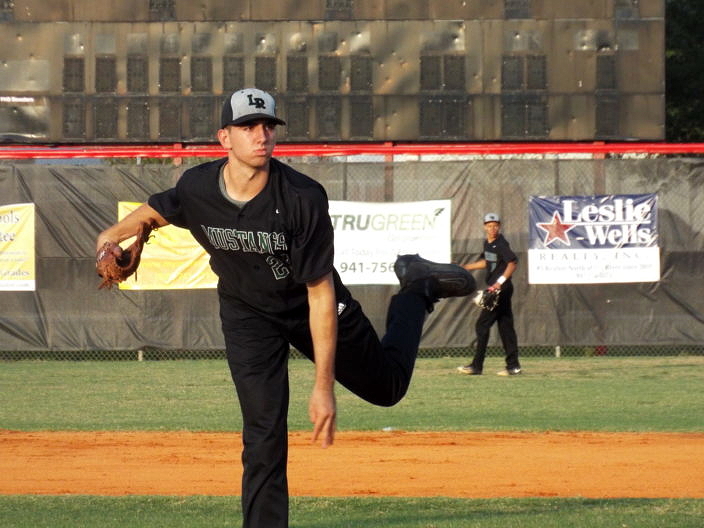 The Lakewood Ranch Mustangs picked the perfect time to finally break through against their 8A-8 rival Palmetto Tigers. Having lost the two previous match-ups by a combined three-runs, the Mustangs’ turned the tables on the Tigers with 6-1 road victory in an 8A-8 semifinal Tuesday night.

A pair of three-run innings, highlighted by a booming solo-shot from Ryan Blakemore, proved to be the difference. Mustangs’ starter Colton Zimring did the rest. Zimring was dealing early and finished the night with 10 punch-outs, allowing just one run on four hits to lead the Mustangs (15-11) to a date with the Sarasota Sailors for the 8A-8 district championship. The Sailors advanced with a win over Manatee on Tuesday.

“I have to come out and get in a groove because it helps the team a lot,” said Zimring. “Tonight, as a team, we played great. I don’t know how many strikeouts I had but there were a few hard-hit ground balls and they made the plays. Tonight was a total team win, for sure, and without them making the plays behind me I wouldn’t have done as well as I did.”

Zimring was nearly untouchable for the Mustangs (15-11), at one point setting down 12 Tigers in-a-row. Zimring’s only blemish came in the bottom of the first when Casey Rodriguez’s triple to center field drove home Tigers’ starter Jacob Josey to give them the early 1-0 lead. Zimmering struck-out the next batter to end the inning and allowed just two hits and one walk the rest of the way. 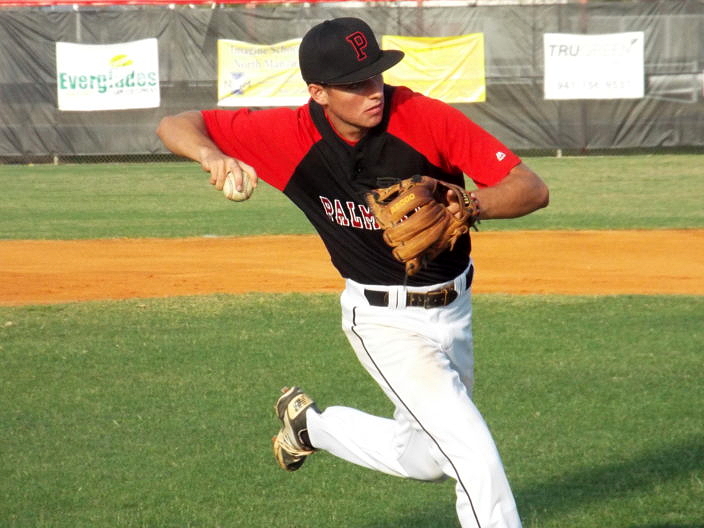 Harrison Thiel makes a play in the field during the loss. At the plate, he collected one of the four hits against Colton Zimring.

The superb defense behind Zimring helped keep the game close until the Mustangs’ bats finally came alive in the top of the fourth inning. With runners on the corners and no outs, back-to-back singles from Jakob Zito and Zimring drove in two runs to give the Mustangs their first lead. A Cade Bonnett double brought home Zito later in the inning to cap the scoring at three, matching their total offensive output of their regular-season series with Palmetto.

Despite being winless against the Tigers (13-12), the team was not worried about the past, only the future.

“It’s the playoffs,” Zimring said. “Most of us are seniors on this team, including myself, so we know its a new season now. It doesn’t matter what happened earlier in the year. We have seven games to get to a state title and that’s how we approach it, one game at a time.”

Zimring and Pablo Garabitos have spear-headed the Mustangs’ rotation with eight wins between the two of them entering Tuesday’s game. Garabitos, slated to take the mound against Sarasota, started in the outfield and was ready to go if needed.

“Colton really slowed the game down and gathered himself early on,” said Mustangs’ manager Ryan Kennedy. “There’s a reason why he is going to the University of Florida, he pitched like a Florida pitcher tonight. We do have a couple of guys we use on a daily basis and we knew that with Pablo Garabitos in the outfield tonight it was good for him to focus on that. We thought about splitting time between he and Colton to keep the pitch count down on both of them so we can use them both in the championship, but once we saw Colton cruising it was one of those things where you just had a feeling it was his night.” 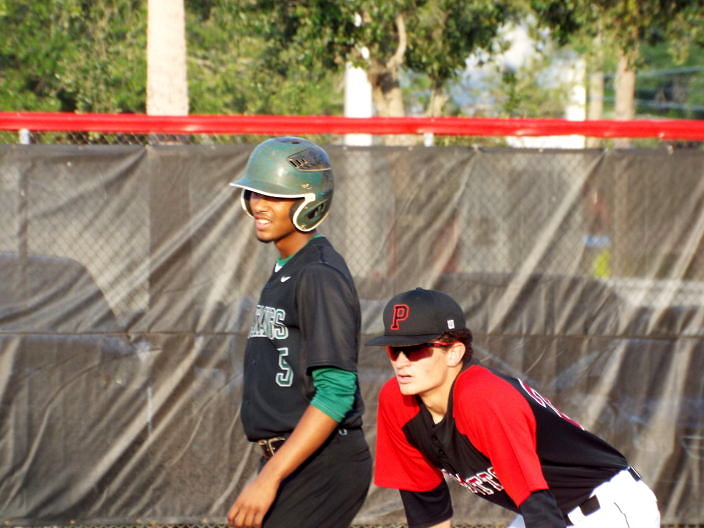 Pablo Garabitos, slated to start the 8A-8 champions, takes a lead from first after driving in a run.

Jacob Josey bested both Zimring and Garabitos earlier in the year in two victories over the Mustangs. He kept Tuesday’s game close early, despite falling behind 3-1 in the fourth. Josey racked up five strikeouts through six innings of work, but Blakemore’s home run off Josey in the sixth changed the complexion of the game. Josey left the game in the sixth and the Tigers left the inning down five runs after two more runs followed Blakemore’s bomb.

“This one will be a slow burn,” said Tigers’ manager Richard Glass. “We need to use this loss as fuel. I know nobody works as hard as us, and come June 1st we will get right back at it with our summer program. We have several guys going off to travel ball, which is great. But with all of our younger kids we are going to be out on the field four days a week and in the weight room getting after it. Playoffs are the ultimate goal. Unfortunately, tonight we ran into Colton Zimring, who was dealing. Getting on him early, I thought we had an opportunity to add a couple more, but he punched out our guy looking and we failed to get that second run. He was just on his pitches all night.”

Despite the sting of the loss and that fact that the 2017 season is now a thing of the past, there is a lot to look forward to for Palmetto. With most of the team returning in 2018, the future is looking really good for the Tigers.

“Our program is moving in the right direction,” said Glass. “There are a lot of positives with this team. For the first time in Palmetto’s history we swept Lakewood Ranch and Manatee in the same regular season. I’m pretty sure that has never been done. The future is very bright for this team. We only lose a few seniors and the rest of our kids are coming back which is a huge plus.” 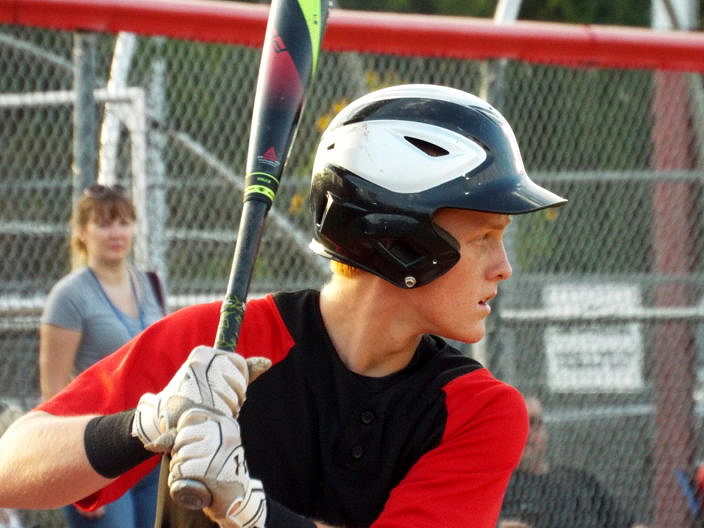