Sunlake Downs Clearwater On The Road In 7A-10 Matchup 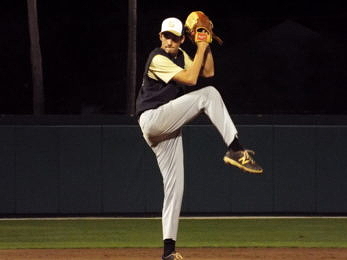 Hunter Norrie started the game for the Seahawks and allowed one hit in the win.

Jack Russell Stadium played host to a 7A-10 match up between the home team, Clearwater Tornadoes, and the undefeated Sunlake Seahawks Friday night. Despite a cold chill in the air, both teams’ bats stayed hot throughout the night.

Behind a 2-for-4, three-RBI night from Dawson Place, the Seahawks built a sizable lead and then held off a ferocious comeback from the young Tornadoes to hold on for a 10-6 district win. Sunlake remained undefeated at 5-0 overall and 2-0 in the district.

The Seahawks were ready to go as soon as they stepped to the plate in the top of the first. Speedster Colden Peeples led the game off with a double into right field. Two batters later Michael Wu drove in Peeples for the first run of the game. Wu added a run later in the inning, the first of his two on a very productive night at at the plate. Wu reached based three times, twice on hits and once on an intentional walk.

“Its a little frustrating,” Wu said on being intentionally walked.”You just have to be able to hand it off to the next guy and know he is going to get it done, and that’s what it takes to get the ‘W’.”

The next guy in this instance was sophomore Dawson Place, who, after driving in Wu on a single to center field, stole home to give the Seahawks a 3-0 lead. Place added two more crucial RBIs later in the game and finished the night going 2-for-4 with three RBIs and a run scored. Place feels the chemistry helps drive the entire team like it did on Friday.

“This is one of best years we have had chemistry-wise,” said Place. “Everybody’s with each other and having fun, but keeping focused and working together. We just have to keep working hard as a team and try to keep the energy going.”

Energy wasn’t an issue for the young Tornadoes (0-5, 0-2) who featured a roster with a number of underclassmen. Despite falling behind by as much as seven, the confidence never wavered within the dugout. Blake Wrenn and Ayden Tess led the way with two runs apiece. Alex Marcano and Austin Potts had two RBIs each and Steven Lange reached based four times, going 3-for-3 with a RBI and a walk. Wrenn, Lange and Marcano also had five stolen bases among them.

“The best part of the game was the kids kept fighting,” said Tornadoes’ Manager Pat Fiore. “That’s what we have been working on. That’s what young kids need to do, they need to learn how to win. The first thing you need to learn in order to win is you need to learn how to compete, and they competed for seven innings. We had our entire team in the game the whole game. Seventh inning, our bench was still cheering the guys on and still working hard. As a young team you can see, we had some ups and downs. We had some great plays and some miscues. But as the season goes on you’ll see the level of consistency go up. We hit the ball well tonight and didn’t strike out a lot. We look at all the positives and by the end of the season we are going to be alright.” 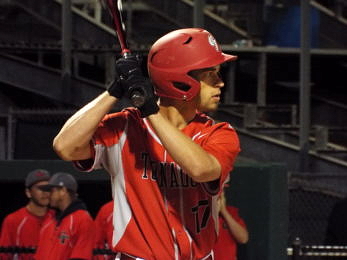 Steven Lange tallied three hits and a walk with an RBI on the night for the Tornadoes.

That energy and confidence nearly led to an epic comeback as the Tornadoes tallied three runs in the bottom of the seventh, two off the bat of sophomore Austin Potts. Clearwater had an opportunity to add more but left a few runners stranded and, in the end, the offensive production of the Seahawks was too much to come back from.

“We try to keep it light at practice,” said Seahawks’ Manager Chris Stambek on keeping the hot start going. “We make sure to keep these guys having fun. I think when we are relaxed at the plate it translates to positive things in the game. The one thing we always talk about is ending it. Putting the finishing touches on the last few innings and just completing the game. We have to do this all the way through, all seven innings because you never know. Our district is tough, Clearwater is tough. They can really hit, as you can see in their comeback. We like to keep it to where we are in control.”

Sunlake saw production from throughout its entire line up, with four of the starting nine collecting multiple hits. Eight players all together collected at least a hit for the Seahawks. Hunter Norrie turned in a solid start, going four innings and allowing just two runs on one hit with one strikeout and picked up the win in an all-important district game.