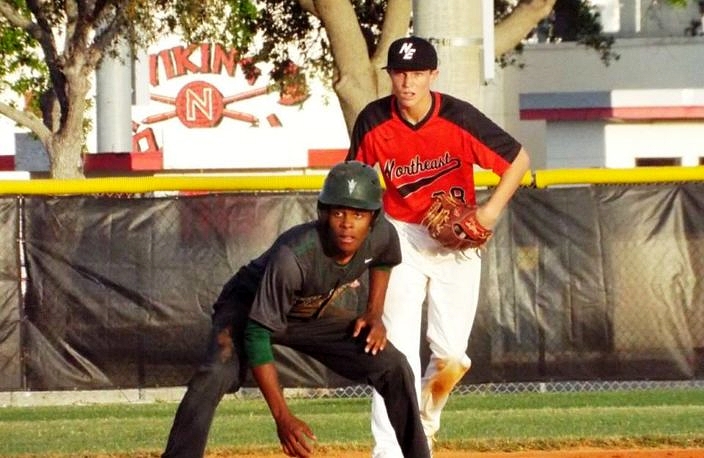 On a night when runs and hits were at a premium, defense and pitching was on full display at Northeast High, as the #11 Vikings hosted their cross-town rival, the St. Petersburg Green Devils on Friday night.

Both teams entered riding a four-game winning streak, and the game remained tied at one apiece entering the fifth inning. Keegan Galloway broke the tie for the Green Devils with a sac-fly in the top of the fifth inning, giving the Green Devils a lead they did not relinquish. Dillon Richardson did the rest as he hurled a complete-game gem for a 4-1 road victory.

“This is Northeast High versus St. Petersburg High,” said Green Devils’ manager Dan Jones. “Its a big rivalry for us. We live just a few miles away from each and a lot of these kids have played together since they were 10. There are a lot of bragging rights at stake in these games. When you got a guy out there like Dillon Richardson who can throw three pitches for strikes it makes life easy on the defense. He works quick. He is a strike-thrower and that plays a big part in our defense making those routine plays.”

Keegan Galloway led the way on offense for the Green Devils (9-3), driving in the go-ahead run in the fifth and working an eight-pitch walk with the bases loaded in the seventh to collect his second RBI and give the Green Devils a two-run lead. Brandyn Naar added to the lead later in the seventh with his second of his two runs scored on the night. Naar also reached base three times by virtue of a walk.

“Games like this, its all about having each others back,” said Galloway. “We know the guy behind us will do his job. We get a guy on, he walks, then we bunt the guy over and he steals a base and then a sac-fly. That’s how you play baseball. That’s small ball right there. We can’t go out and expect to hit home runs every game.” 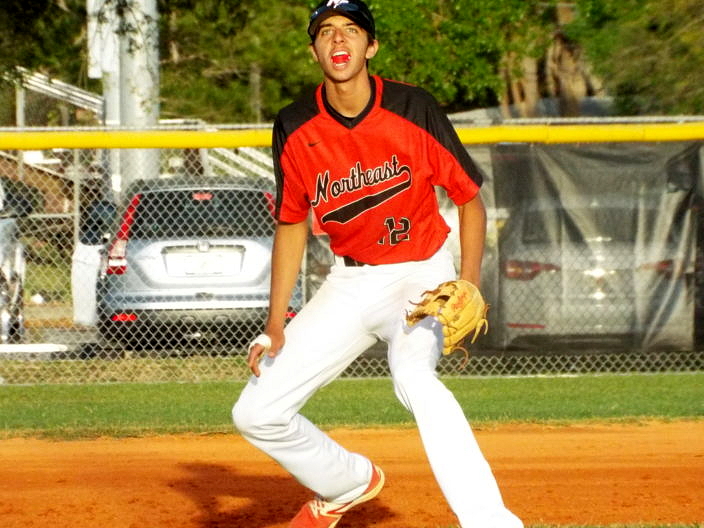 Vincent Brooks watching the ball on defense, on offense he scored the lone run for the Vikings.

Tad Stockowski and Tyler Luce drove in the other two runs for the Green Devils. Hudson Livesey and Daniel Loney scored a run a piece for the road team. Loney was able to move into scoring position standing up with a steal of second.

Senior Kobe Hartley drove in the The Vikings’ only run of the game on a sacrifice hit in the fourth inning to tie the game at one. Hartley had a strong night overall, going 2-for-3 with the RBI. Lucas Smith picked up the loss despite a solid night that saw him strike out six batters over five innings of work.

Unfortunately for the Vikings (8-2), Green Devils’ starter Dillon Richardson kept heating up as the innings went on despite the falling temperatures and increasing wind speeds. Richardson allowed just one run on four hits over seven innings of work with four strikeouts. Richardson showed great control all night by not issuing any walks. He pounded the strike zone all night, allowing his stellar defense behind him to make plays, and that they did.

“They make plays for me,” said Richardson. “I just go out there and work my butt off, try to keep the ball down in the zone and let them work. Biggest game of the year right there. We have a phrase on this team and its ‘Pass the Baton’ and we keep passing it, day in and day out.” 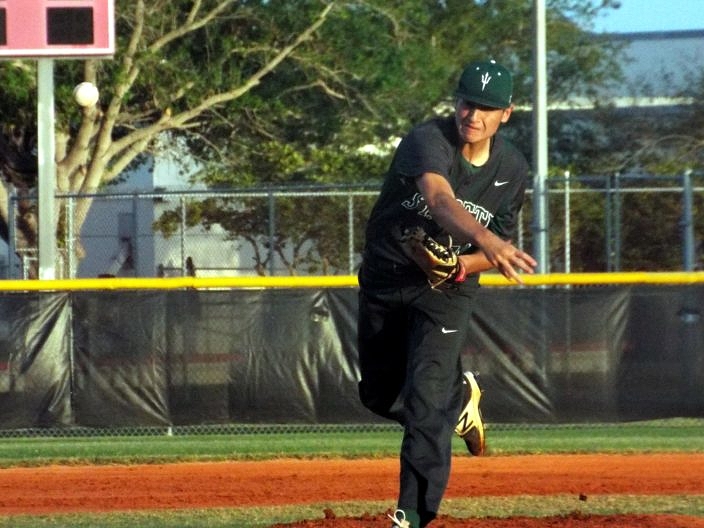 Dillon Richardson helped power the Green Devils past the Vikings with a complete-game effort.

The victory was the epitome of a total team effort. All but one player reached base for the Green Devils. The bottom of the order collected all the hits, but the top third of the order walked five times, drove in two runs and scored twice.

The four-mile distance between the two schools turned out out to be larger than the run differential in this game, but in the end a loss is still a loss. The Vikings will look to regroup as the Green Devils will look to extend their winning streak to six.

“Hats off to Dillon, he really pitched a heck of a game tonight,” said Vikings’ Manager Rob Stanifer. “He was dominant all night. They came out ready to play, they were hungry from first pitch and we kind of just went through the motions. We walked too many guys, we fell behind too many guys and made too many mistakes and you just can’t do that against a good team like that. They are an experienced team and took it to us tonight.”