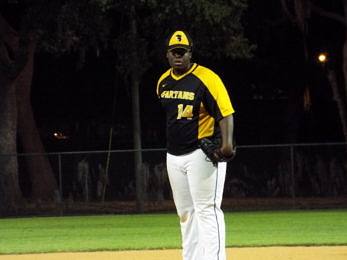 The Spartans’ Sean Thornton looks in for the sign from the catcher.

With the 2017 season in full swing the Lemon Bay Manta Rays were still searching for their first win of the season. On Wednesday, they traveled north to St. Petersburg to take on the Lakewood Spartans. A four-run second inning helped the Spartans jump out to an early 5-1 lead, but the Manta Rays stormed back on the bats of Trey Fields and Brandon Gielow and pulled away with a 16-5 victory.

The Spartans (2-3) had everything working for them early in the game. Starter Sean Thornton kept the Manta Ray batters on their toes through the first three innings. Thornton allowed just one run on three hits during that stretch.

Spartans’ Manager Jayce Ganchou was disappointed they let the lead slip away and lamented the mistakes they made late in the game.

“We are a young team,” said Ganchou. “We are still learning the process of dealing with adversity. We had four good innings out of Sean Thornton, then the wheels came off and they put up 12 unanswered runs. We took took advantage of a couple of their mistakes early on and then we made a series of mistakes of our own and they took advantage of it and hit the ball around. We are young and learning how to work through this stuff.”

A walk to Ryan Agdamag and back-to-back singles from Derek Scott and Aiden O’Dowd in the bottom of the second inning got the Spartan offense moving in the right direction. A sacrifice hit from Anthony Hudson with the bases load brought home Agdamag to give the Spartans a 1-0 lead. They added three more runs before the inning was over after they took advantage of a few defensive miscues committed by the Manta Rays.

The teams traded runs in the third inning and the Spartans took a 5-1 lead into the fourth, chasing Manta Rays’ starter Jacob Treece in the process. 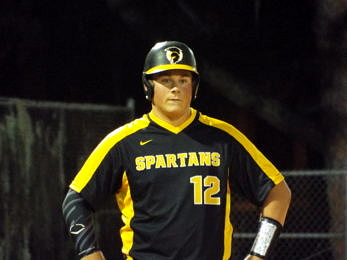 Freshman Scott Germak stands at first after working a walk.

Facing a four-run deficit, the Manta Rays (1-4) needed a spark offensively. Treece got the rally started with a single past the shortstop with one out in the fourth inning. Two hit batsmen loaded the bases with two outs for Trey Fields, who laced the second pitch he saw deep into right field for a bases-clearing triple. The near-home run cut the deficit to just one and it remained that way until the sixth inning.

“I feel like we crossed a threshold tonight,” said Manta Rays’ Manager Casey Hanrahan. “We have had a lot of stuff working against us up to this point of the season and to just break through and get a couple things going our way. It felt good, it really felt like a break through. We have something to build on now. This team has a lot of potential, we just need to dig down deep and find a way to get it done. Hopefully we keep building that momentum moving forward.”

Entering the top of the sixth, still trailing 5-4, the Manta Rays continued the rally. Coleston Dukes led the inning off with a single to left field, followed two at-bats later by a single from Rinconnes to put runners at first and second. After a walk to Fields loaded the bases, Brandon Gielow hit a blistering line-drive double to right field to score Dukes and the go-ahead run, Rinconnes. The Manta Rays took the lead for the first time all game and never looked back. Fields and Gielow crossed the plate later in the inning and Kreissler added another run and the Manta Rays entered the seventh with a 9-5 lead.