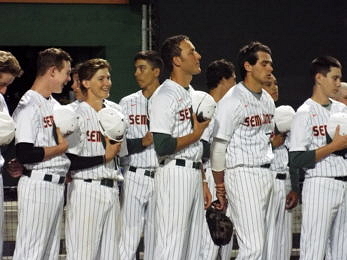 For the 26th year in a row, Seminole High is hosting the Steve Georgiadis Memorial Tournament in honor of the former Seminole Warhawk and Florida Gator who died in 1990.

The Tournament features the host Seminole Warhawks and other teams from within Pinellas County vying for the chance at glory in the opening week of the season.

This year, the tournament kicked off with a double header. First, the Dunedin Falcons and Indian Rocks Golden Eagles needed 11 innings to determine a winner, as the Falcons won 2-1 on a walk-off single by sophomore Lake Fisher. In the second game, the Seminole Warhawks cruised to a 15-0 victory over the Lakewood Spartans behind a complete-game, four-inning effort from starter Cameron Cueller.

In the eleventh, after a single from Chris Hunter and double from Ben Garcia, Fisher singled passed the shortstop to bring home Hunter for the winning run.

“We have a lot of young talent,” said Falcons’ Manager Ron Sexton. “I told the kids before the last inning that your pitching and catching deserves a run right here, we’ve missed some opportunities but lets just make it up right now. It was nice to see us come through.”

The Eagles (0-1) finally broke through the scoring stalemate in the top of the fifth inning on a Will Leber line-drive single to left field that scored Parker Farris from second. However, the Falcons (1-0) took advantage of a wild pitch charged to the Spartans in the bottom half of the fifth when Derek Dormois scored from third to tie the game. Despite multi-hit games from Alex Sexton, Chris Hunter, Lake Fisher and Justin Rodriguez, the game remained scoreless for another several innings. 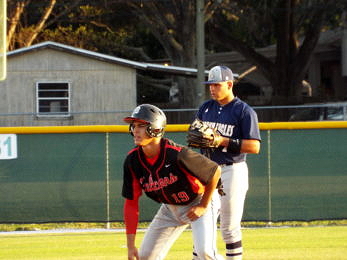 Junior Ben Garcia takes a lead at second in game against Lakewood Spartans.

The pitching trio of Parker Farris, Aaron Ackerman, and C. Booten combined to strike out seven Falcons’ batters and only walked one, limiting the damage of the Falcons offense. A triple in the bottom of the tenth inning by Alex Sexton nearly ended the game, but it wasn’t until an inning later the Falcons walked-off the winner.

The second game of the doubleheader was decided much sooner than 11 innings. The Warhawks’ (1-0) offense came out on fire, scoring six runs in the second, five runs in the third and four runs in the fourth and final inning. The offensive onslaught was led by John Robinson, Connor Berry, D’Amico and Jake Wegener, who all had multi-hit and multi-run games. Between the four of them they reached based nine times and scored 10 runs.

The Spartans (0-1) offense was held in check by the Indians starter Cameron Cueller all night. The Spartans only placed three base runners all evening. Scoot Germak walked twice and Dean Hudson got the only hit of the game off Cueller. For the evening, Cueller allowed just one hit on 66 pitches over four innings. He struck out nine and walked just two in the Warhawks victory.

The Steve Georgiadis Memorial Tournament will resume on Thursday evening at Seminole High, with the finale being Friday evening to crown a 26th champion of the tournament.