Venice Rolls Past Brandon To 7A State Final Four 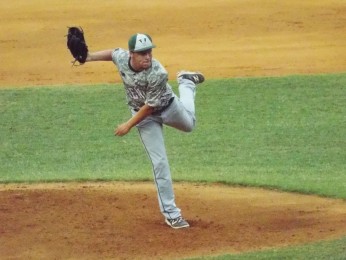 Indians starter Caleb Williams picked up his 10th victory of the season.

With a trip to jetBlue Park and the opportunity to play in the state semifinals on the line, the Brandon Eagles hosted the Venice Indians in a clash for the 7A regional championship on Tuesday. The dream became a reality for the Indians, as an eight-run fourth inning propeled them to a 13-0 victory over the Eagles to earn them a spot in the state tournament.

It may be a new district in 2016 but it is the same result for the Indians (25-5), who showed everyone why they are the defending state champions. The Indians arrived in style Tuesday, packing two large buses full of players, family and fans for their trip north to Brandon. They did not disappoint all those that made the trip.

Venice (25-5) will face Creekside next Thursday in a 7A state semifinal at jetBlue Park in Fort Myers. The Knights advanced with a 6-2 win over Tate on the other side of the bracket.

Kevin Dubrule got things going for the Indians in the first, sending a hard ground ball into center field for a single, driving in Tyler Gardner from second to give the Indians the 1-0 lead. Gardner led the offense all night, going 4-for-4 with two RBIs and two-runs scored.

Dubrule came around to score on an RBI single from Mitch Dinofrio later in the inning.

Facing a 2-0 deficit, the Eagles (21-7) were given the task of having to face Indians starter Caleb Williams, who came in sporting a 9-2 record with a 0.85 ERA on the season. Williams set the tone early, allowing just one base runner over the first two innings, while striking out two.

“It feels great anytime you can get the ball with a chance to go to the state tournament,” Williams said. “We just want to keep this rolling. A lot of guys have been here before so we know the effort it takes to win a state championship and we are going to put forth that same effort we have all year.”

Antonio Velez and Jack Hubbard collected the only two hits for the Eagles on the night. Velez also reached base on a walk issued by Williams.

“You got to give them all the credit,” said Eagles manager Matthew Stallbaumer. “They came in here with a plan and they were able to dictate to us what they wanted to do, which we try to do and up until this point we have been pretty successful doing. You’ve just got to tip your hat to Venice. Once it got away from us, it is what it is.”

More run support came in the third inning for Williams. The Indians doubled their lead on an error charged to the Eagles that allowed Shane Shifflett to reach base and Kyle Bachle and Dubrule to cross the plate. Shifflett scored two batters later on a fielder’s choice to give the Indians a 5-0 lead.

Shifflett was not finished. Now with a 8-0 lead in the fourth inning, Shifflett put the exclamation point on a great night at the plate for the Indians offense. Facing a 2-1 count, with Jake Grubbs and Dubrule on base, Shifflett rocked a pitch deep over the left field wall for his second home run of the season. Shifflett finished with five RBIs on the night. 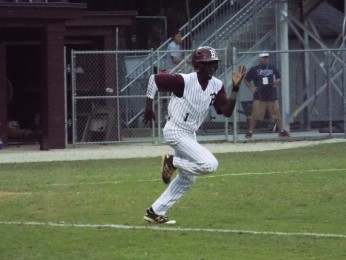 Tyrek Ball tries to beat out a play at first to reach base.

“I was a little big on the pitches before that one,” Shifflett said. “I told myself I needed to calm down and go down to 90 percent instead of swinging at 100 percent. I saw the pitch and the ball looked really big to me and I took a very easy swing and hit it and it felt great.”

Williams’ night was over after three innings of work. He left with a 13-0 lead after Trevor Holloway and Joe Kinker added a run each. Williams left having allowed only two hits and no runs while striking out four. Holloway came in to relieve Williams and closed out the game, going two innings, allowing no hits and striking out three.

“It’s pretty exciting,” said longtime Indians manager Craig Faulkner about returning to defend their state crown. “It’s our fifth year in a row going back. We feel like we have a lot of work to do but these guys just came to play today. We worked hard to get ready for this pitcher. Antonio Velez is a tough pitcher to go against so it was nice to perform.”

The Indians, previously of 6A, will now look to go back-to-back with a 7A state championship. They will look to do so with what got them there in the first place.

“We work hard on our small game,” Faulkner said. “The little things that we do, our picks, bunt plays, hit-and-runs, and stolen bases, we put a lot of effort into that. It pays off, Brandon was a good team, we just got hot tonight and just feel very fortunate and humbled by the opportunity to get back to the state playoffs.”

Two more victories for the Indians, and they can celebrate another championship for their school.