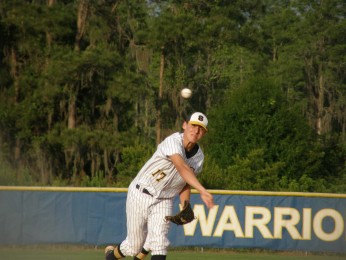 C.J. Van Eyk struck out 13 and surrendered only four hits.

In front of a packed house at Steinbrenner field the Warriors used stellar pitching and defense to defeat the East Lake Eagles 3-0 in the regional finals. The Eagles just couldn’t find an answer to C.J. Van Ecyk. The junior pitcher was dominant on the mound, allowing only four hits and a walk while striking out 13 Eagle hitters. Van Eyk used a mixture of fastballs and breaking balls to keep the Eagles at bay all game long.

Steinbrenner (25-5) will play Westland Hialeah in an 8A state semifinal next Friday night. The Wildcats won 3-0 over Delray Beach Atlantic to also advance on Tuesday night.

“We have leaned on C.J. all season long,” said Steinbrenner manager John Crumbley. “He has gotten stronger as the season went along. Steinbrenner got its first run in the first inning when catcher Nicholas Alessi singled to left center and advanced to second after a walk to first baseman Patrick Morris. A wild pitch advanced both base runners and left fielder Ryan Russell answered with an RBI single to right field.

That 1-0 lead lasted until the fourth inning when the Warriors struck again. Second baseman Drew Burkhart doubled off the center field wall.

Center fielder Tim Coakley laid down a bunt and reached first on a throwing error. That advanced Burkhart to third base and he scored on a squeeze-bunt by second baseman Dean Raeckers that pushed the score to 2-0.

The Eagles did have chances in the game, but just couldn’t score any runs when they had runners in scoring position. First baseman Jakob Sessa had two singles on the evening, but was followed up by a strikeout that ended each of those innings.

Van Eyk was able to shut down the Eagles’ offense with a mixture of pitches throughout. He struck out the side in the third inning and seventh innings.

Steinbrenner added its third and final run of the game in the fifth inning when they put together four hits to push the final run across the dish. Burkhart was 3-for-3 with two singles and a double as pitcher James Christian was not able to retire Burkhart in three at bats.

Sessa was 2-for-3 with two singles which accounted for half of the hits allowed by Van Eyk on the night.

“Tonight just wasn’t our night,” said Eagles Manager Zack Roper. “We weren’t able to string anything of value together. Their starter got the best of us tonight.”