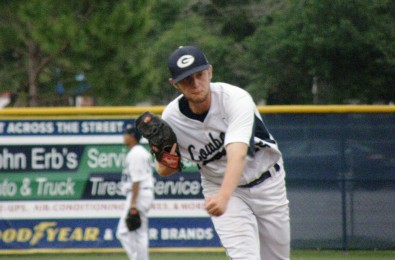 Gaither’s Gavin Gillespie pitched six innings for his ninth win of the season.

Gaither sent twelve batters to the plate in the second inning and that was all it took to defeat the Hillsborough Terriors 9-2 on Tuesday in a 7A regional semifinal.

The Cowboys (17-9) have won seven games in a row and will play Melbourne in a 7A regional championship next Tuesday. A win in that game means a trip to the state Final Four at jetBlue Park in Fort Myers.

After a walk to shortstop Cam Williams and a hard liner over the third baseman’s head by the catcher Danny Gutcher, third baseman Chipper Holland reached first on an errant throw to load the bases. A double to the center field fence by left fielder A.J. Drisdom scored the Cowboys’ first two runs of the game. After a single by first baseman Rico Gonzalez, Holland and Gutcher scored to put the Cowboys up 4-40 with no outs.

“We were able to take advantage of pitches that were left out over the plate,” said Gaither manager Nelson North.

Gaither was taking advantage of every opportunity in the inning to score in the second inning. After a walk to Jason Gonzalez re-loaded the bags for center fielder Jose Cardenas. Cardenas laid a bunt down the first base line to score Drisdom from third base. Gonzalez scored on a wild pitch and it brought Cam Williams to the plate for his second appearance of the inning. Williams wasted no time before launching a bomb over the right field fence to make the score 8-0.

“I was seeing the ball really well coming out of the pitchers hand,” said Cam Williams. “The home run I hit, I just waited for a mistake and fortunately for me he left a fastball up and I took advantage of it.” 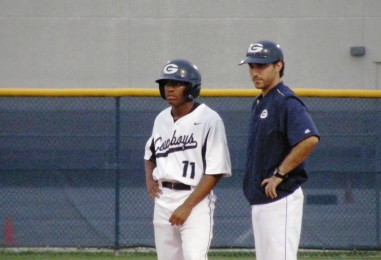 Cam Williams had a good day at the plate, going 2-for-3 with a home run.

The Terriors (18-8) scored two runs in the fourth inning when first baseman Tim Elko tripled down the first base line and was followed by a home run by third baseman Nick Romano, who launched a long shot over the center field fence to make the score 8-2.

The Cowboys starter Gavin Gellespie kept the Terriors off balance most of the six innings he pitched in the game, pounding the strike zone with hard fastballs and a twelve-six breaking ball. Gillespie (9-2) surrendered five hits and no walks and had five strikeouts.

Jared Cande came in for the third for Hillsborough, and he gave up a lone run on one hit in the fifth inning when Cam Williams lined a double to right-center field for his second hit in the game. After stealing second he advanced to third on a wild pitch and then another wild pitch brought him in.

The Terriors’ pitchers combined for eight strikeouts on the night. Hillsborough lost its third game of the year to Gaither after beating the Cowboys on opening day.