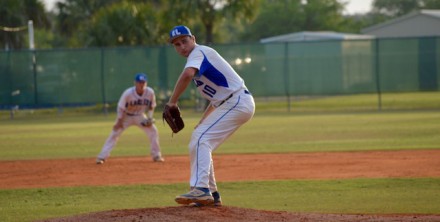 Christian James winds up for a pitch in the third inning of the 8A regional semifinal against Lakewood Ranch.

East Lake won via shutout Tuesday night in an 8A regional semifinal, shutting out the high-powered offense of Lakewood Ranch and sending a message to the remaining 8A teams that the Eagles mean business.

A stellar performance on the mound by East Lake senior Christian James was the key factor in the 4-0 victory. James threw a 80 pitch complete game, striking out six, walking only two and allowing just three hits. He was in control of the game from start to finish.

“I just came out and threw fastball first pitch just to get ahead in the count and I heard they swung at the first pitch,” James said. “Then, when you see the defense playing like they were, it really settles you down. You know you don’t have to throw strikeouts because your guys behind you will make the plays.”

The East Lake defense was like a steal trap and played a major roll in the win. Shortstop Kevin Lambert had the left side of the field locked down and was a one-man highlight reel all night. Lambert dug out countless ground balls, including three in the fourth inning alone, and each throw was a bullet right to first.

Eagles manager Zack Roper knew that defense would be the determining factor in a game against what he called the highest batting averages his team has ever faced.

“I told the guys that the team that played the best defense would move on,” Roper said. “We knew that we had to pitch to contact and be shut-down on defense and my hats goes off to my guys for getting it done.”

Offensively, East Lake played tough for runs. Relying on aggressive base running and timely hitting. The first run came in the top of the third. Second baseman Reid Zitzelberg walked to put a man on first, Jakob Sessa moved Zitzelberg to second on a bloop single to center field and James helped his own cause by driving home Zitzelberg with a long RBI single.

Insurance runs were added in the sixth. Taking advantage of a walk and a throwing error to put a man on third, catcher Seth Caballes drove in the second run with a single to right. Kyle Shoulta added a sacrifice-flyout RBI for the third run of the game. James added the final run in the seventh on a sac-fly RBI of his own, giving him two RBIs on the night to go with his shut-down pitching performance. 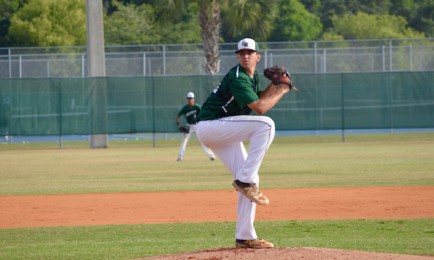 “We are just putting up our best at bats of the year and defense is the name of the game hopefully we can put together three more wins,” said Sessa, who was 3-for-4 on the night.

Offensively, Mustang batters struggled. They went three-up-and-three-down four times during the game and with only a few hits, Lakewood Ranch put a man on second just three times.

A frustrated Lakewood Ranch manger Ryan Kennedy praised his team and looked optimistically to the future of his program.

“Zimmering was struggling a little bit but he worked through it and trusted in his team, it just wasn’t our night but we have a lot of youth and most of our guys are coming back next year so we have a bright future here at Lakewood Ranch,” Kennedy said.