Berkeley Prep Falls To Calvary Christian In 4A Semifinal

Written by Anthony Uttariello on May 14th, 2016 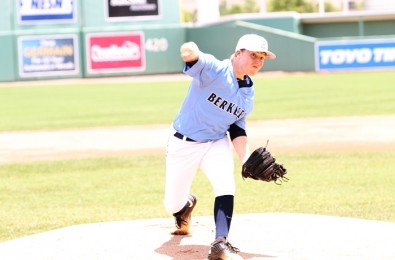 The Calvary Christian Eagles came into the 2016 season with a new manager and a young team that graduated nine seniors from a regional finalist team in 2015. The adversity of the changeover, however, was no match for a team that surprised many baseball fans by winning their 4A region.

On Thursday, the Eagles took another step in their magical state title run, defeating Berkeley Prep 6-1 in the 4A state semifinal, and advancing to the title game Friday afternoon against Bishop Verot.

“When we came in this fall, we had no idea what we had,” said manager Alan Kunkel. “We worked hard all fall in the weight room, and didn’t even play ball in the fall. To graduate the number of seniors we did from last year and get to this point shows what this team is all about.”

What the team was about in the semifinal game was timely hitting and a dazzling performance by sophomore Christian Scott on the mound.

The offense, like they have all season, started slowly and then poured on the runs late. The Eagles broke open a pitcher’s duel between Scott and Berkeley Prep starter Casey Keller in the third inning. Shortstop George De La Fe hit a one-out single and Max Guzman was hit by a pitch. After a second out, Tommy Orr singled home De La Fe. Luis Ezra’s single suddenly gave the Eagles a 3-0 lead.

Meanwhile, Scott was cruising on the mound. With strong defensive play behind him, Scott held the Buccaneers in check for six no-hit innings.

As Scott came off the mound in the sixth, he held an innocent smirk that indicated he knew the height of the moment.

“At that point I just felt that we were going to win the game,” said Scott. “My defense was great all day, and it was just the emotion of the moment.”

In the top of the seventh, Calvary extended their lead to a comfortable 6-0.

De La Fe was hit by a pitch to start off the inning, and Guzman, who had been pitched around in previous at-bats, lined a single to right. Victor Pimentel walked, and when Brett Lawson lined a two-run single, the Eagles had their insurance runs.

All that was left was the drama of the no-hitter. That drama came to an end quickly when the Buccaneers’ Jakob Hines lined a single to left to lead off the seventh.

That was the start of a valiant effort by Berkeley Prep to climb back into the game.

After a flyout, Casey Keller and Michael Hill both had hits, plating the first run of the game for Berkeley.

The Eagles went to their bullpen to finish it out, and Lawson came on from his second base position to close out the final two outs and move Calvary into the championship game. 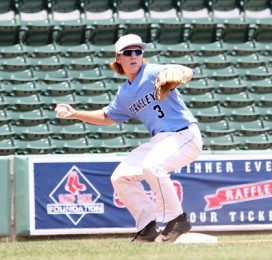 “We are set up pretty good,” Kunkel said of his staff heading into the title game. “We have a senior lefty on the mound that has thrown well all year. We know Bishop Verot has some good ballplayers and is a good team, but we will be ready to go.”

For Berkeley Prep, this position is one that has become all too familiar for one of the top programs in the state.

The Bucs came into the playoffs without one of their top weapons, sophomore Julian Bosnic, who was lost to injury earlier this season. Despite the loss of one of their top players, the team fought through and still reached the state semis.

“Losing one of our top guys and getting here shows the teams perseverance,” said Warren. “They showed it again there in the seventh inning, but it just wasn’t enough today.”