Alonso Comes Up Short In 2-1 Loss To Columbus

The Ravens celebrate after tying the game in the sixth.

All season long the Alonso Ravens have proven their resilience in overcoming obstacles. The club came into the season with high expectations and a talented group, then persevered through some early struggles to fight its way through a tough playoff road all the way back to the state Final Four. Friday afternoon the team fell behind early in its state semifinal at Fort Myers’ jetBlue Park, but again the Ravens answered back.

After evening the score in the sixth inning, Alonso’s impressive season came to a tough end when Columbus rallied for the deciding run in the final inning to claim a 3-2 victory.

“Even when we were down I really thought we’d be able to come back, take the lead and win the game,” Alonso manager Landy Faedo said. “We had Jordan Butler on the mound and Jordan is a bulldog. He goes out there and competes and he gives it everything he’s got. He just lifts the moral of the team and they go and compete for him. They show up to every game, they compete hard and they give everything they’ve got.”

With the game tied in the top of the seventh the Explorers made the final plays they needed to earn the victory. Mikey Navarette reached on an error and then moved to second on a throwing error on a pickoff attempt to get into scoring position. Matt Alfonso moved him to third with a great sacrifice bunt on a high pitch that he was still able to get down on the grass where he needed it. Mike Fernandez then followed with a suicide-squeeze bunt that pushed Navarette across the plate with the winning run.

Columbus closer Dominick Diaz came on to close things out in the seventh and immediately surrendered a lead-off walk to Mason Turner, who then reached second on a sacrifice bunt from Kevin Velez. But Diaz dug in to make the pitches and record the final three outs that preserved the victory and ended the Ravens’ season one game short of a state championship game they never doubted they could reach. 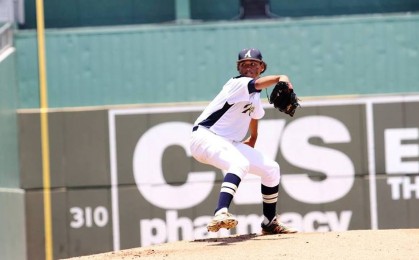 “We knew we would get here,” Faedo said. “We have a heavy senior class, good pitching and typically we play good defense. There was no surprise that we were here. We really wanted to get to the finals. We know we gave ourselves opportunities to score runs today but we just didn’t come up with any big hits. Sometimes that happens.”

Alonso hit into three double plays during the day, which was something Faedo last recalled his team doing way back in a 2004 playoff loss to Nova High.

Alonso starter Jordan Butler was saddled with the tough loss despite a quality start. The left-hander pitched into the seventh inning while allowing just four hits and two walks. Both runs scored against Butler were unearned on a day where his defense did not have its best outing in his support. Yet the southpaw remained composed and kept plugging away to keep his team in the game, as he piled up nine strikeouts and was rarely threatened with runners in scoring position.

“I just never gave up,” Butler said. “I believed in my team and thought we were going to win the game.”

Columbus opened the scoring with a run in the top of the second. JC Carullo was hit by a pitch, stole second and came home when Jose Machado reached on an infield error.

The Ravens got on the scoreboard to tie things up in the bottom of the sixth. Mike Paule walked and moved to second on a wild pitch, where an infield error allowed him to round third and even the score at 1-1.