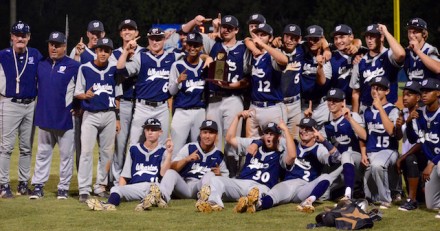 From first pitch to final out, Wharton was in command of Thursday’s 8A-4 championship game. The Wildcats took the lead in the top of the first inning and never looked back, shutting out top seed Strawberry Crest to earn their second district championship in five years.

Pitching was key to Wharton’s win over the Chargers. Starting pitcher Tyler Garam threw six innings of flawless baseball, allowing only four hits, three walks and striking out four. Closing pitcher Tyler Hathcoat finished the game with two strikeouts of his own in the bottom of the seventh to secure the 4-0 victory and the championship.

Nerves were not a factor for Wildcat ace Garam, who pointed to his coaches and the adrenaline rush as the reason he had a flawless night in such a big game.

“The coaches told me to do what I normally do, hit my spots,” Garam said. “Then Adrenaline kicks in and everybody knows we don’t want the season to end.”

Behind the ace, defense was also clicking on all cylinders. Wharton turned two double plays in the game, including a heads-up play by first baseman Zack Ware, who caught a line drive in the fifth and quickly stepped on the bag for the second out. On the other side of the field shortstop Drew Erhard had the entire left side covered, moving from left to right all night, including a diving stop in the second inning to get the force at second base after a lead-off single by the Chargers.

On the other side of the ball the Wildcat offense set the tone for the game in the top of the first. Leadoff hitter Duncan Pastore hit a single through the gap on the very first pitch of the game. Erhard then hit a single of his own to put runners on first and second with one out. Catcher Scotty McGuire hit a blooper to right, driving in the first run of the game. 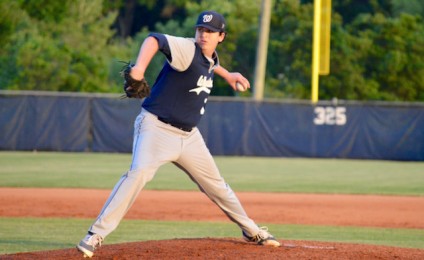 “My first hit really got the game going,” McGuire said. “I actually told Duncan that if he got the first hit we were definitely winning the game. He got the hit, I drove him in and we won the game.”

The Chargers struggled on offense as well, sending only one base runner to third all night and stranding four runners in scoring position. It was something that Chargers manager Eric Beattie was very frustrated with and looks forward to working on as the playoffs progress.

“This is a very hard loss. They came out and played flawless and we didn’t, that was the difference in the game,” Beattie said. “But tomorrow we have to get out there and prepare for regionals.”

Smiling ear-to-ear, Wildcats manager Victor Hoffman was extremely proud of his team and excited to finally win the district championship after being runner up for the last three years.

“Its a big win because now we have the advantage, our home field for the start of the playoffs,” Hoffman said. “We have been here five years in a row and this is the second time we won, and winning is contagious.”