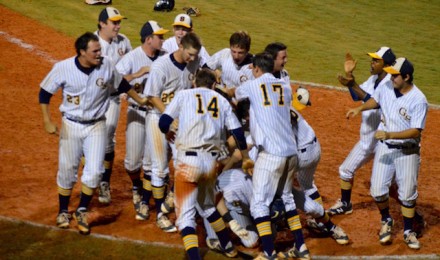 Warriors celebrate at home plate with Morris in the center after a walk off victory.

The Steinbrenner Warriors and the Plant City Raiders squared off Wednesday night in a 8A regional quarterfinal that left fans on the edge of their seats and ended with a memorable walk-off moment.

A back-and-forth game for most of the night, the teams entered the seventh inning all tied up. Warrior’s first baseman Patrick Morris ended the tie and the game with a long home run to right-center field, giving Steinbrenner a 3-2 victory over the visiting Raiders.

It was a tough loss for Plant City and pitcher Billy Mckay, who pitched almost a flawless game. Going seven strong innings and striking out four, Mckay was in command for much of the night. Two of the strikeouts came in the first inning, setting the tone for the Raiders’ defense.

Offensively, Plant City took advantage of Warrior miscues to strike first. In the third, a lead-off walk to center fielder Dalton Wingo got things going for the Raiders. Second baseman Nick Palestrina moved Wingo to second on a bloop single and Mckay helped his own cause with an RBI single to left, bringing Wingo home for the first run of the game.

The Raiders added a second run in the top of the fourth after shortstop Brendan Shultz reached on an error. Catcher Matt Moclair had the RBI double that brought Shultz home. Plant City lost an opportunity for more runs on the very next play, when Moclair was picked off trying to steal third.

The Warriors also had an ace on the mound that started the game off right defensively. Junior CJ Van Eyk pitched seven nearly perfect innings as well, giving up only two runs while striking out seven batters. Much like the Raiders, Steinbrenner took advantage of miscues to tie the game up at two apiece.

Catcher Nicholas Alessi scored the first run for the Warriors on a throwing error, after reaching base on a fielder’s choice in the fifth. The second run was earned in the sixth on a RBI single by center fielder Cam Coakley, bringing in third baseman Bradley Hession, who led off the inning with a double.

In the top of the seventh Plant City’s bench came alive trying to rally for one more run. They were met with a determined Van Eyk who quickly retired the side with just ten pitches. 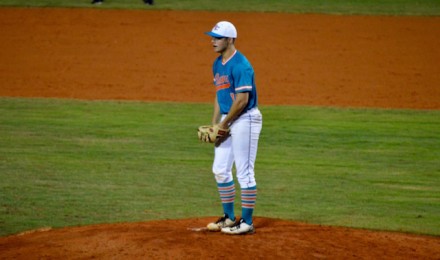 Billy McKay sets for a pitch late in the game. McKay went for seven innings and four strike outs in the loss.

“After we tied it up I knew that I could not let them get anything going and I came out determined to shut them down,” Van Eyk said.

In the home half of the seventh Mckay got a quick strikeout before he faced Morris. A two-seam fastball left high in the zone to Morris was the difference in the game. Morris took advantage and made Mckay pay, sending it over the right field fence.

Morris said he was waiting for that pitch all night and he knew that if he got the chance he could hit it far.

“He was throwing a two-seam that was dropping on my two earlier at bats, so I knew that if I got that same pitch that started high in the zone it would drop right down the middle; I got it and hit hard,” Morris said.

Morris was mobbed at home plate by exuberant players and coaches as the home crowed roared his nickname: “PK.” Manager John Crumbley was excited for his team but gave credit to the skills that Plant City showed.

“McKay was their guy and he was very tough,” Crumbley said. “Pat, I think, is tied for the lead in home runs now with four and he got to him.”

While Steinbrenner celebrated a shocked Plant City team headed home, its season done. Manger Mike Fryear was proud of his team and hopeful for the future as the program really starts to take shape.

“We had them beat but we just let it get away from us,” Fryear said. “Its a tough loss but a good season and our program is really starting to take shape. We should be right back here next year.”