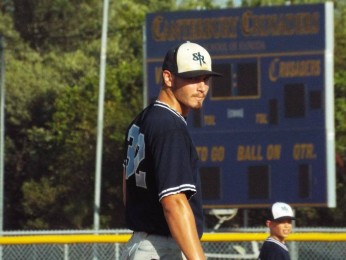 Parker Pillsbury shined on the mound and at the plate for the Warriors in the 2A-5 championship.

The Keswick Christian Crusaders hosted the Seven Rivers Christian Warriors Thursday afternoon in the 2A-5 championship. The game remained tied at one heading into the seventh inning, when a triple from Parker Pillsbury drove in two and vaulted the Warriors to a 4-1 win and a district championship.

The Warriors (18-5) took the 1-0 lead in the third inning when Pillsbury came around to score the games first run on an error by the Crusaders. Pillsbury scored the final run of the game as well in the seventh on another error.

Tristan Velerio started the game for the Warriors and threw 49 pitches over three innings. He allowed the Crusaders’ lone run on five hits and one walk with three strikeouts. Carson and Parker Pillsbury combined to pitch the final four innings, allowing no runs and no hits. Carson Pillsbury walked two and struck out four and picked up the victory. Parker Pillsbury was credited with the save.

The Crusaders (19-5) reached the championship game after a thrilling extra-innings affair with the Canterbury Crusaders, but had trouble breaking through the triumvirate of Velerio and the Pillsbury brothers. The Crusaders’ only run came in the top of the fourth inning when Quinton Pertkiewickz sent a line-drive double to center field that scored Will McClure.

Josh Guerin pitched the entire game for the Crusaders, throwing 95 pitches over seven innings of work. He walked only one and struck out four batters. Guerin held the Warriors in check for most of the night but in the seventh, after Carlos Hallowell and Noah Bresson reached base to lead off the inning, Parker Pillsbury sent the first pitch into the outfield for a triple and a 3-1 lead. Pillsbury scored during the next at-bat.