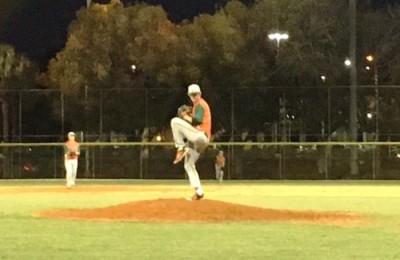 Max Downey got the Seahawks out of a jam in the third inning.

The Seminole Warhawks traveled over 100 miles to play their out of town rivals Naples High on Friday night. The game was a constant back-and-forth battle between both sides. The Warhawks came out victorious after eight innings of play, with a final score of 10-6.

With the game tied in the top of the eighth inning, Warhawks number nine batter Ethan Roberts hustled down the line to beat out a close play at first, sparking an instant rally for Seminole. The next two batters reached safely, loading the bases.

After David Siegal hit a hard ground ball to the shortstop which resulted in a force out a home, Nick Lamoureux then came up to the plate for the Warhawks. Lamoureux had hit the ball hard in his last three at bats and he singled the other way, allowing two runs to score. Conner Berry then followed with a bases-clearing double, giving the Warhawks a four-run lead.

“I was just thinking other way, to get the runner in,” Nick Lamoureux said. “He threw me a curveball outside and I just went with it.”

The Warhawks (11-8) came ready to play. In the top of the first inning, a combination of patient at bats and timely hitting resulted with the Warhawks collecting an early 3-0 lead.

The Golden Eagles rallied back in the bottom of the third inning. The frame started with an opposite-field single off the bat of Naples shortstop B.J Minarcin. Matthew Vetter followed with a line drive single of his own. With runners on first and second Giovanni DiGiacomo put down a perfect bunt which resulted in an infield single, loading the bases for the Golden Eagles (16-4).

A line-drive single into left field off the bat of Cory Berning scored two runs. Trey Heiser then hit a sharp ground ball past the diving shortstop, allowing two more runs to cross the plate and putting Naples up by a run. 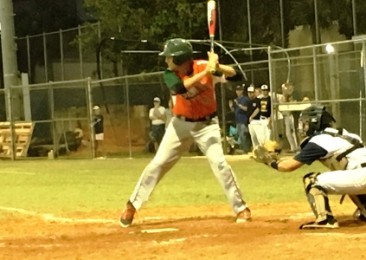 Seminole then turned to junior pitcher Max Downey to get them out of a jam. With runners on first and second Downey forced a 5-4-3 double play to get the Warhawks out of trouble. Downey then pitched the next two innings for Seminole, while only allowing one hit and no runs to score.

“I just went in their trying to throw strikes and hit my spots,” Max Downey said. “I was really focusing on getting my breaking ball to break.”

The Warhawks quickly answered back with a rally of their own in the top of the forth. The first two batters of the inning reached base safely. A sac bunt from Matt Tharp allowed both runners to advance. Back-to-back misplayed balls allowed the Warhawks to regain the lead.

With the score being 6-4 in favor of the Warhawks, the Golden Eagles knew they were running out of time. Naples brought a total of eight batters to the plate in the bottom of the sixth inning, with big hits coming from Matthew Vetter and Cory Berning. The Golden Eagles plated two, tying the game at 6-6.