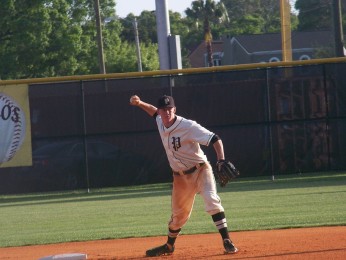 It took three pitchers and an extra inning, but the Plant Panthers escaped with a 6-5 win over the Robinson Knights Thursday night. In a situation that called for a hero, Connor Scott, who started the game on the mound for the Panthers, got it done at the plate. Scott launched a curveball well over the right-field wall with two men on to tie the game in the bottom of the seventh, forcing an extra inning.

Center-fielder AJ Hubbard delivered with a line-drive double down the left-field line in the eighth. Hubbard took third on a passed-ball, and Brock Fagler followed with an RBI infield single to win the game for the Panthers (15-5).

“All I did was put that last inning out of my thoughts,” Scott said, referring to the top of the seventh, when a walk and four errors led to four Robinson runs, putting Plant behind 5-2 going into the bottom of the inning. “We got a couple of guys in front of me that got on base, and I just wanted to put a good swing on it.”

“That’s a really good team. They’ve been playing good baseball,” Braun said. “Last year, they beat us. That’s kind of what you’re getting across the board with them.”

The Panthers took the lead in the bottom of the third inning when designated hitter Sam Nation singled to right-center off of Knights starter Michael Tini.  Plant catcher Zach Koch followed with a base hit, moving Nation to third.  After Koch stole second, John Shields came through with an RBI groundout to score Nation, putting the Panthers up 1-0 after three. 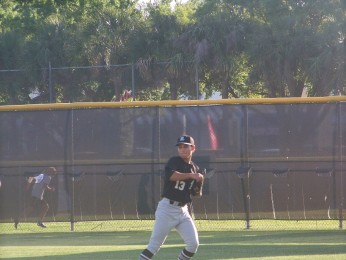 Robinson right-fielder Aaron Scott fires the ball into the infield after a base hit.

Scott, the Panthers’ hard throwing left-hander, was in command on the mound early on, holding the Knights scoreless for the first three innings. In the fourth Robinson pulled even, getting back-to-back singles from catcher Shawn McGory and third baseman Joey Scionti.  A throwing error on a pick-off play and a stolen base by Scionti moved both runners into scoring position with one out. Mitch Tozien then grounded out to first to score McGory, tying the game at one.

Plant scored again in the fifth, after starting the inning with left-fielder Davis Bak reaching on an error.  Brock Fagler sacrificed him over to second, putting Bak in scoring position with just one out.  Nation then walked to reach first.  Shields drove in his second run with a single between third and shortstop, scoring Bak for a 2-1 advantage.

After a scoreless sixth, the Knights made their move in the top of the seventh.  Zack Moseley reached on an error, and Kris Terry followed with a single to right that was misplayed, allowing him to reach second while Moseley went to third.  Matthew Chowning then hit a swinging bunt that turned into two runs on a throwing error. Chowning was able to take second on the miscue. Killian McCray then walked, and Matt Steckel singled, scoring Chowning.  McCray also scored on the play, after the ball was misplayed by the defense.  The four-run inning put Robinson up 5-2 going into the bottom of the seventh.

“I loved it,” Robinson manager Kevin McCray said of the back-and-forth battle. “I loved our effort; I loved their effort.  From a spectator’s standpoint, you can’t watch a better game. We’ll just learn from it, and try to do better next time.”

Robinson starter Michael Tini walked the leadoff man, Nation, to start the seventh, and was quickly replaced by Matt Steckel on the mound.  Nation stole second base, and Mike Haydak walked, putting runners on first and second with two outs.  Connor Scott then walked to the plate, representing the possible last out. Instead, he lifted a 1-1 pitch deep to right field and over the fence, driving in three runs and tying the game at five.

The Knights were unable to get anything going in the top of the eighth off of Panthers’ left-hander Stephen Cashin, setting the stage for more heroics from the Plant offense.

Plant reliever Stephen Cashin earned the win in one inning of work, while Matt Steckel suffered the loss in three innings of work.