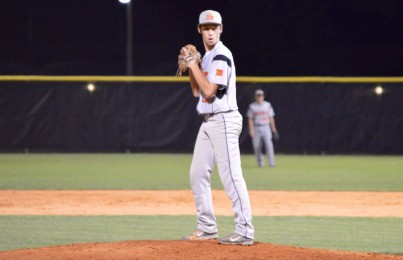 Phil Shore winds up in his win against the Pirates Tuesday night.

Solid base running, strong pitching and a three-run first propelled the #6 Sarasota Sailors to an impressive 4-3 road win over a tough Braden River Pirates team. It was the very same Pirates team that they lost to less then a week ago.

Both sides were evenly matched on offense and on defense, trading blows back and forth all night. It came down to who took advantage of more opportunities and in the end, Sarasota walked away victorious.

Sarasota’s go-ahead run came in the sixth and was sounded by good base running and a little bit of luck. Horwitz hit a triple to the center field wall, but he would not be the winning run. The first baseman was caught up in a pickle for the second out of the inning, after catcher Cole Madden hit a soft grounder to short. Madden reached base on the fielder’s choice and advanced into scoring position on a passed ball. Right fielder Daniel Marin hit the RBI single that brought home courtesy runner Kyle McMullen for the winning run.

Pitcher Phil Shore got the win in relief for Sarasota, pitching an inning-and-a-third of shutout baseball. Starting pitcher Leo De La Torre also had a strong outing, allowing only three runs and a walk in five-and-a-third innings. While he was happy with the win, De La Torre knows that he must improve his pitch placement in order to do well come playoff time.

“My fastball was working tonight but I have to work on throwing more strikes,” De La Torre said.

Offensively the Sailors opened the night with a three-run first inning setting a strong tone that carried throughout the game. Second baseman Alex Arauz led off the game with a single and scored off designated hitter Nick Long’s drive to the left-center gap. Long also drove in shortstop Nick Derr and scored the final run of the inning on first baseman Grant Horwitz’s single to left.

Braden River answered in the home half of the first with two runs of their own. Third baseman Giancarlo Gamboa capitalized on a walk and scored the Pirates first run on a sacrifice fly by left fielder John Bean. Shortstop Tyler Dyson hit a long double to center field and scored on a Cole Pencosky single to left. 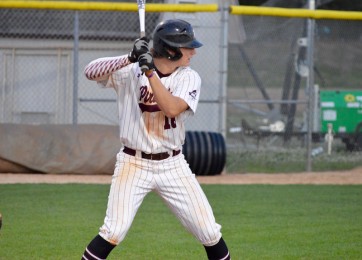 Tyler Dyson (1-for-4) waits for a pitch against the Sailors.

The Pirates scored the tying run in the fourth but couldn’t pull in font of a strong Sailors pitching staff.

Sailors manager Clyde Metcalf was proud of his club but said heading into the playoffs they need to take care of themselves first.

“It was nice to win and it was nice to turn around what happened last week against these guys,” Metcalf said. “But we need to focus on ourselves a little bit. Our offense and our pitching needs to be stronger.”

While the Sailors look ahead and try and fine-tune their game, Tuesday’s victory was a proud moment for coaches and players alike. Derr was happy to snap last weeks losing streak and is looking towards the playoffs.

“Its a big win heading into next week just before the playoffs,” Derr said. “we came down with a few losses but its great to get a win.”

“We had some mental mistakes and left a lot of runners on base,” Page said. “We kicked the ball around and spotting them three early runs is not how you win games. It’s disappointing, for sure.”

As the one seed in its district, Braden River is looking to fix its mistakes and head deep into the playoffs, while Sarasota will be trying to do the same.