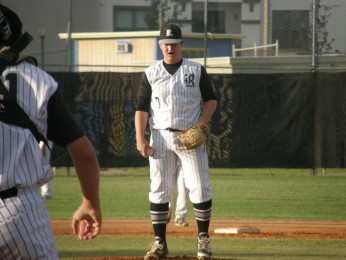 Michael Tini pitched Robinson into a showdown with Jesuit

The Robinson Knights hosted the Jefferson Dragons Tuesday night in a 6A-8 playoff game. Led by Michael Tini and Mitchell Tozian, the Knights took an lead early, held off a seventh-inning rally from the Dragons and preserved a 6-3 district playoff win.

The Knights (15-8), facing a one-run deficit in the second inning, took advantage of an error on the Dragons (9-16) as Mitchell Tozian scored from second to tie the game. The go-ahead run came in on an error in the third, allowing Aaron Scott to score.

Michael Tini threw a strong game for the Knights. Tini threw just shy of 100 pitches in the complete-game effort, allowing three runs on six hits and three walks. He struck out two batters in the process.

“I’m proud of our team for taking care of business,” said Knights manager Kevin McCray. “Michael Tini threw a great game for us, and we had some big two-out hits from Joey Scionti, Mitchell Tozian and Kris Terry as well as some solid defense. It’s tough to beat a team three times in the same year and Jefferson was fired up and played a good game.”

Tozian added to the Knights lead in the bottom of the fifth with a double to left that scored Matthew Steckel and Shawn McGory. Steckel, Kris Terry and Joey Scionti each added an RBI to bring the score to 6-1 in favor of the home team.

However, the Dragons began a rally in the seventh. First, Jake Coleman scored on a bases-loaded walk to Julian Latorre. Then, a sacrifice from Jack Rodriguez scored Lucas Estevez to pull to within three, but Tini induced two ground outs to secure the win and end the rally.