On a very warm and muggy night in Central Florida, the Orangewood Christian Rams made the trek from Maitland to take on Bishop McLaughlin in a 3A regional showdown. It was worth the trip for the Rams, as they came away with a hard-fought 7-6 victory over the Hurricanes.

With both teams handing the ball to their top pitchers from the season it was a battle to the very last out of the game.

Dom Diaz started the game for Bishop McLaughlin and he hit the second batter, designated hitter Patrick Yost. Third baseman Jeremiah Davis blasted a double to left-center field and advanced Yost to third base. Yost scored on an infield groundout by first baseman Jake Leiffer to take a 1-0 lead.

Orangewood Christian starting pitcher Quinn Echelson took the mound for the Rams, and he retired the Hurricanes in order in the first inning. The second inning, Echelson issued a walk to infielder Chris Berglund. After back-to-back singles by left fielder Cam Diaz and designated hitter Chris Cigarron, Berglund scored the first run for the Hurricanes to tie the score at one apiece.

In the top of the third inning, Yost started the inning with a single up the middle for Orangewood Christian. Jake Leiffer sliced a single down the third base line to put runners at first and second base with one out. First baseman Jake Garrido laid a perfect bunt single that stayed fair by inches. That loaded the bases for the Rams, and after Diaz issued a walk to Trent Lawrence the second run crossed the dish for the Rams. Shortstop Jake Leferer worked the count for another base on balls by Diaz to push the third run in for the Rams. Center fielder Michael Spears blasted a triple to the center field wall to clear the bases for the Rams to make the score 7-1 in the third inning.

“I was sitting on the fastball all game long and he made a mistake and left that one up and I was able to clear the bases with a triple to help my team,” Michael Spears said. 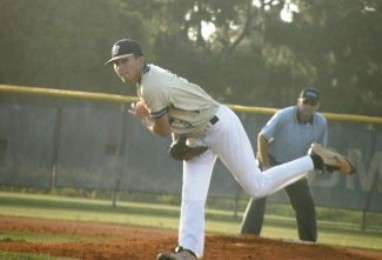 Bishop McLaughlin came to bat in the bottom of the third inning trailing by six runs. Second baseman Jacob Rodriguez was issued a walk and he moved to second on a wild pitch by Echelson. Center fielder Bryce Carroll singled home Rodriguez for a run. Carroll stole second base and scored on a single by third baseman Chris Berglund that would cut the score down to 7-3.

Paul Perez took over the pitching duties for Bishop McLaughlin and did a good job setting down the Orangewood players for the last four innings to keep them from adding to the score.

“They are a great team and very well coached, like always. But we were able to put enough runs up early and play defense behind our pitchers and come away with the victory and we feel very fortunate,” said Orangewood Christian manager Scott Hilinski.

The Hurricanes continued to chip away at the score all game long, as they added two runs in the sixth inning on back-to-back singles by Berglund and Cigarron. Right fielder Blake Carroll roped a triple to right-center field to push Berglund and Cigarron across the dish to make the score 7-5 heading into the seventh inning.

Relief pitcher Jake Leiffer took the hill for the Rams to try and shut down the Hurricanes. First baseman Carson Ragsdale started the inning off by getting hit by the first pitch from Leiffer, he quickly stole second base to get into scoring position for his team. after two quick outs and Ragsdale still on second base, Berglund singled in Ragsdale to make the score 7-6 with two outs. Leiffer induced a flyout to the infield for the third and final out of this classic 3A showdown.

Berglund had an impressive day with a walk and three hits and two RBIs.