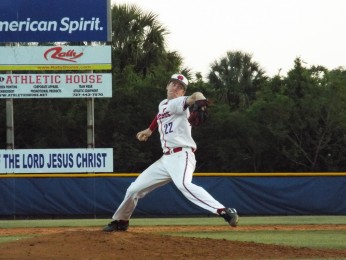 Mustangs starter Brandon Tracy struck out five batters Thursday on his way to a win.

The race to the final four continued Thursday night when the Northside Christian Mustangs hosted the Evangelical Christian Sentinels in a 3A regional semifinal match up, with the chance to play the Canterbury Cougars in the regional finals at stake.

Northside Christian jumped out to a 3-0 lead in the bottom of the first, thanks in part to the bat of Corey Yawn. Then Brendan Tracy limited the Sentinels to just one run as the Mustangs held on to win 4-1 to advance.

The Mustangs live to fight another day as they are now one step away from a trip to jetBlue Park in Ft. Myers and the state semifinals.

With five days until their next game, Northside Christian will have plenty of time to prepare for a tough Canterbury opponent. The dream to reach the state Final Four is all the fuel the Mustangs need.

“The message is to stay humble and stay hungry,” Mustangs manager Raul Hernandez said. “What you saw today was a reflection of practice. We really grind these guys out at practice and we stress the fundamentals. Right now this team is playing well, it has been playing well all season long on all levels. It all just goes back to practice. We try to make practices as game relevant as possible. Put them in pressure situations, like when they take ground balls they are on a timer, and have to get rid of the ball in four seconds. We work on that stuff all the time, expecting the unexpected so we can be the most prepared.”

Facing a 3-1 count, Yawn turned on a pitch and sent the ball deep into the outfield and easily reached third base for a lead-off triple that set the tone for the Mustangs (23-5), who came in with a dominate 15-1 record at home this season. Yawn didn’t sit at third for long, charging home on a RBI single from Colton Olasin to give the Mustangs a 1-0 lead two batters later.

Later in the inning, with two on and two out, Brian Fuller swung at the second pitch he saw and lined a ball into the outfield for a double, scoring Olasin and Tracy to increase the lead to 3-0. An RBI single from Ty McGeehan in the bottom of the third scored Jonathan Alonso. 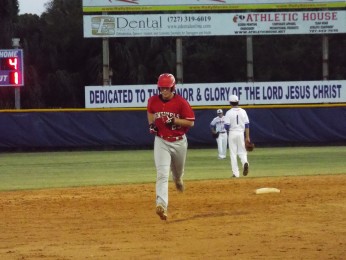 Matt Soletti runs the bases after his fourth inning home run off of Brandon Tracy.

Four runs proved to be more than enough for the pitching duo of Tracy and Yawn. Tracy started the game for the Mustangs, going five strong innings, throwing just under 70 pitches. He allowed one run on four hits and struck out five in the process in picking up the win. Tracy has been impressive all season, sporting a 5-1 record with a minuscule 0.79 ERA entering tonight’s contest.

“It felt great,” Tracy said. “I have played with these kids my whole life so it felt good to toe the mound when it matters most. I was glad I was able to bring one home.”

The Sentinels (20-8) tallied their lone run off of Tracy with one out in the top of the fourth inning. Matt Soletti was facing a full count when he took a fastball and launched it over the center field wall for the home run, his third of the season.

Ben Specht had a solid night on the mound for the Sentinels, going the distance. Specht struggled in the first but after that, he settled down and threw 90 pitches, allowing four runs, walking none and striking out five.

However, after the home run from Soletti, the Sentinels managed just one more base runner the entire night, a single from Specht. The rest of the game belonged to Tracy and Yawn, who came on in the sixth in relief of Tracy.

Yawn only needed 26 pitches to get through the sixth and seventh inning. He surrendered one hit and struck out three and picked up the save to add to an already impressive night that saw him go 2-for-3 with two extra-base hits and a run scored.

“Its feels good,” Yawn said. “We have been really working hard together as a team week in and week out and it feels good to come in and shut the door on a good team.”

The Sentinels were a very good team all year, dominating their district to the tune of a 11-3 record. They have a bright future as they are only losing a handful of seniors, including Billy Genter, Michael Marcelak, and Soletti. 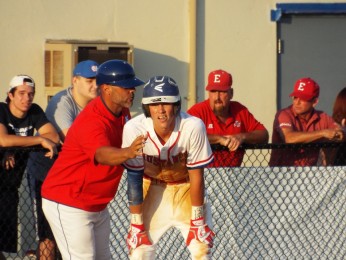 Corey Yawn catches his breath at third after a lead off triple to start the game.

“We had a good season,” Sentinels manager Jeff Kieffer said. “We are obviously disappointed in the outcome here tonight. Northside played a great game, they are a good team. Their pitcher kept us off balance all night, especially with the change up and of course their closer really set the tone. We had some opportunities early but didn’t cash in and they had some opportunities and they did, and that was the difference in the game.”

The Mustangs will now begin to prepare for the Canterbury Cougars, whom they will face for 3A regional championship and the right to take the field at jetBlue Park. The team knows there is still work to be done and that they haven’t come this far to only come this far.

“Tomorrow at school we might celebrate,” Tracy said. “Lunch should be fun, but tomorrow at practice we get back to business.”