Northeast Advances To 7A-10 Finals With Win Over Osceola 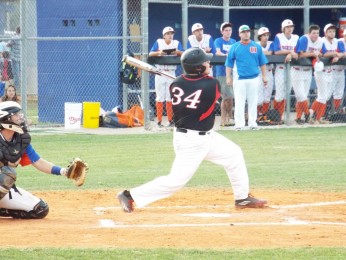 Derek Jaar belts a solo home run in the top of the first to give the Vikings a two-run lead.

The 7A-10 district playoffs continued Wednesday night from Seminole as the Osceola Warriors hosted the two-time defending district champion Northeast Vikings in one of two semifinal match ups on the day.

A Derek Jaar solo home run set the tone early for the Vikings, who built a sizable lead against the Warriors and held on to win 6-1. They advance to the district finals for the third consecutive year.

The Vikings (21-6) started the game red-hot at the plate. Ryan Cook led things off in the first with a double to left field. During the next Vikings at bat, Cook stole third before coming around to score the first run of the game on a sacrifice ground out from Will Condon. Jaar was the next batter and, after seeing two pitches, he launched a fastball into deep center field for his first home run of the year, giving the Vikings the 2-0 advantage.

“I was looking for something up” said Jaar. “I knew Corey Ireson was throwing fastballs, so I just tried to get something in the air.”

After shutting down the Warriors (16-9) in the bottom of the first, the Vikings entered the second inning and picked up right where they left off in the previous one. First, Jake Hale fouled off four pitches after falling behind 0-2 and worked a walk to lead off the inning. Hale came home to score moments later on a Chase Bardes double to center field to give the Vikings a three-run advantage.

Adam Arredondo came in to run for Bardes and scored the fourth run for the Vikings on an error. Kobe Hartley capped the scoring in the second with a two-run single to left field that brought home Luke Bannister and Cameron Cooper for the 6-0 lead. 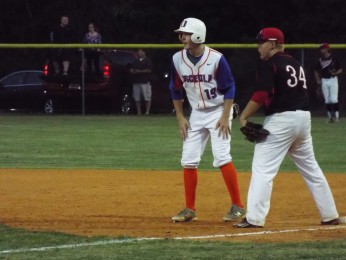 Senior Tyler Malinowski scored the lone run for the Warriors in his final game.

“We have been really working hard,” said Vikings manager Rob Stanifer. “The kids have been outstanding with their effort in practice. We had a game plan coming into today and we executed it.”

Part of that game plan included a complete-game gem from starter Joey Jimpie, who needed just 89 pitches to get through seven innings. Jimpie allowed one unearned run on three hits and just one walk, while striking out four batters. Pitch placement was key, as he induced 11 fly-outs and six ground outs on the night.

“Joey threw one heck of a game,” said Stanifer. “He was throwing strikes, challenging them, and putting balls in play. We had some great defensive plays from Luke Master, a freshman, at third base and Jake Hill in left. It was a complete team effort today.”

The effort put forth has earned them the opportunity to achieve a goal they set a long time ago, to win a third consecutive district championship.

“It feels amazing,” said Jimpie. “We are going for the three-peat this year and its been our goal since the last one a year ago. I’m exceptionally excited for our opportunity.”

The opportunity for a three-peat will come on Friday during the 7A-10 finals against the Mitchell Mustangs, and the Vikings are ready.

“They’re ready and focused,” said Stanifer. “They know what the goal is. We have won our district two years in a row and from day one the goal has been a three-peat. Its a new district, but they know how to win playoff baseball so they are ready to go. They’re an experienced team and really came out and gave it everything they had to.” 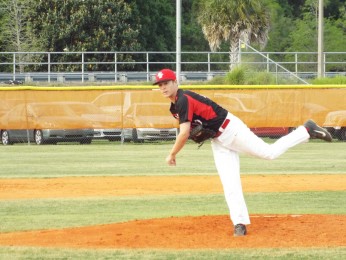 Joey Jimpie picks up the win in a complete game, three-hitter, advancing the Vikings to the finals.

The Warriors’ lone run came in the fourth inning on an error by the Vikings infield that allowed Tyler Malinowski to score from third. After the second inning, a combined five innings from Tanner Connolly and Malinowski help shut out the Vikings for the rest of the game, but the damage had already been done.

“The Vikings came out of the gate ready to play,” said Warriors manager Stefan Futch. “They put two on us early and backed it up with a really good second inning. We shut them out by mixing it up the rest of the game and tried to scrap our way back, but their pitcher did a great job lifting the ball up and getting a lot of fly balls and stayed out of bad counts. They made the plays and congratulations to Northeast. “

After the game, Futch and the other coaches shared a special moment in left field with their seven graduating seniors, a group that included Malinowski.

“We talked to our seniors and thanked them for all of their hard work for the three or four years they have been here,” Futch said. “We told them that if there is anything we can do for them at the next level, by all means let us know and then we helped them get over this a little bit. The future for Osceola baseball is bright. Every team loses seniors, and its up to us to coach them up and get the next group ready to go.”