Jesuit Walks Off River Ridge To Advance To Regional Semifinals 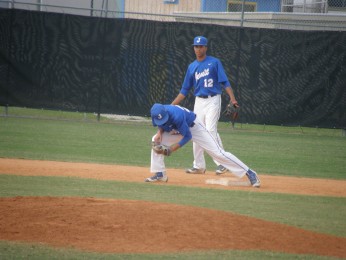 Alex Mocny and the Tigers advanced to the Regional Semifinals with a 1-0 extra innings victory.

Offense was at a premium in Wednesday’s 6A regional quarterfinal between the host Jesuit Tigers and the River Ridge Royal Knights. Both teams as they combined for a total of 12 hits as the game went to extra innings. In the tenth, the Tigers finally broke through on a costly error by the Royal Knights and walked off with the 1-0 victory.

The Tigers (23-5) came in as the #5 ranked team in the TB Rankings and turned to ace Jack Anderson to help them advance in the playoffs. Anderson was very ace-like, as he hurled 87 pitches over seven innings, allowing no runs on five hits with seven strikeouts. Jeff Hakanson came in for the extra three innings and held the Royal Knights scoreless, allowing only two hits and matching Anderson’s seven strikeouts.

“Pitching, pitching, and pitching, that’s what carried us tonight” Tigers manager Miguel Menedez said. “Jack Anderson was lights out for seven innings and Jeff Hakanson was just as good for the final three innings. They kept us in it and we found just enough offense in the 10th to win it.”

Andrew O’Brien got the call for the Royal Knights (13-11) and was outstanding in holding the potent Tigers offense to just one run. O’Brien threw 128 pitches over nine innings, striking out seven and walking seven. He allowed just the one run on five hits.

McGuire Weaver got things started with a single to left field to lead off the inning. Alex Mocny quickly followed that with a single to right field, advancing Weaver to third to put runners on the corners with no one out. Weaver wasn’t at third for long as just moments later he crossed the plate, representing the winning run, when Nico Baldor reached first on an error from the Royal Knights infield.