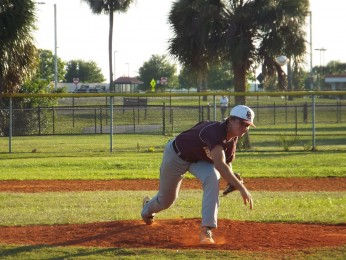 Kyle Parish pitched a complete game for the Phoenix and picked up the win.

Jack Dawson Field played host to a non-district match up between the Brooks DeBartolo Phoenix and the host Bayshore Christian Warriors on Friday evening. Led by Luis Andujar and his three RBIs, the Phoenix came out swinging en route to a 16-3 victory, snapping a four-game losing streak.

The Phoenix (7-14) got things rolling in the first when Andujar crossed the plate for the first run of the game on a sacrifice from Johnny Diaz. Andujar added a two-run single in the second and then came around to scored later in the inning on a single from Xavier Rodriguez, part of a seven-run second inning.

“It feels great, especially coming off a losing streak,” Andujar said. “We all just were eager to win and we came out and just did our thing. We weren’t trying to do too much, we weren’t trying to hit home runs on this field; we just wanted to get the ball in play hard and hope it finds the hole.”

The Warriors (8-6) struggle for most of the night, offensively and defensively. However, after falling behind by two in the second, the Warriors showed some life, led by Vincent Van deL’isle. With one out and one on, Van deL’isle doubled to left field, bringing home David Santiago. Van deL’isle scored later in the inning and finished the night 2-for-3 with a run and an RBI. Nate Fernandez recorded the other RBI. 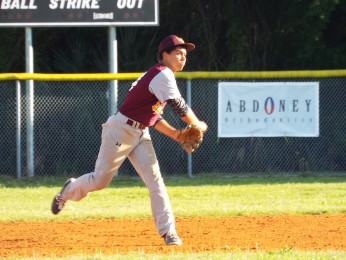 Nate Fernandez makes a play in the field for the Warriors.

“Leaders need to lead and big-time players need to be big-time players,” said Warriors Manager Corey Thomas. “Today, I feel my team was beat in every aspect of the game as far as mentally and physically. A lot of plays that occurred during the game were mental. I am not taking anything away from Brooks DeBartolo, they definitely outplayed us on the field, but they crippled us mentally more than anything.”

Thomas told the players to learn from their mistakes and make adjustments to improve.

“I like to think I am raising men instead of coaching boys,” said Thomas. “This was a learning experience. When you come out and get beat in this fashion, you didn’t bring it today. But like I tell the guys, effort is free. There is no reason why a team should play harder than you.”

A main reason for the Warriors struggles at the plate was due to Phoenix starter Kyle Parish, who came in and was lights-out for five innings to pick up the victory. Parish threw 82 pitches over five frames, allowing three runs on seven hits and just one walk, while striking out 10 to pick up his second win of the year.

“The first inning I kind of struggled,” said Parish. “But after that I showed them a curveball and they couldn’t really pick up on it. From there, I was hitting my corners and throwing my curve for strikes, and my defense made the plays.”

With Parish in control on the mound, the offense continued to rake. They added seven more runs across the third and fourth inning. Angel Vargas, Johnny Diaz, Dylan Miller, and LeAndre Mahoney all added RBIs for the Phoenix to go along with the six runs driven-in from Andujar and Rodriguez. 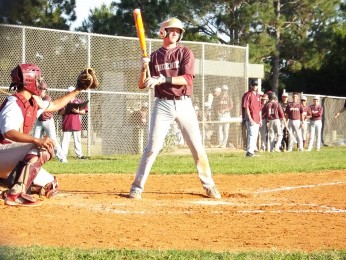 Logan Eade takes a pitch high and inside for a ball.

“We got to play every game, one bat at a time, one inning at a time,” said Phoenix Manager Edwin Leal. “The players seemed like they grinded a little better today. They put the ball in play a little harder, kept the ball out of the air, and they hit the ball hard and down to the ground. That was the biggest difference; we had better at bats early.”

The win snaps a four-game losing streak for the Phoenix. With four games remaining they hope they can use the momentum from this win to help them finish strong.

“We have a busy end of the season,” said Leal. “We have some young guys that we have added that have moved up from JV that look like they’re hungry to play and its going to be a pleasure to coach them the next couple of years.”

The players know the situation facing them and are hungry to take it head on. All they have to do is win.

“We obviously want to win all the next four games,” said Andujar. “But we really want to win playing our best and take that into districts.”