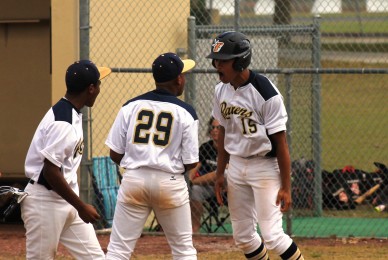 Alonso’s Jordan Butler picked up the victory on the mound and went 1-for-3 with an RBI triple at the plate in the victory.

The 9A regional quarterfinals kicked off Wednesday night with a match up between the Alonso Ravens and the visiting Fort Pierce Central Cobras. The Ravens wasted little time as they hung six runs on the Cobras in the first inning and held on to win 6-1.

The Ravens (21-6) were led by Jordan Butler, both on the mound and at the plate. First, Butler set the tone in the top of the first inning by striking out the side. Butler followed up his strong opening inning on the mound with an RBI triple to score Ryan Mejia from first to take a 1-0 lead in the bottom half of the frame.

Butler returned to the mound and went on to throw 108 pitches over six innings allowing one run on three hits and four walks, while striking out eight.

The Cobras (10-10) only run came in the top of the sixth inning with no outs on a double from Jake Slattery off of Butler. Robby Bingham, who was walked to begin the inning, came around to score the Cobras lone run.

Butler made it through the sixth inning and handed the ball over to Ryan Fernandez in the seventh. Fernandez sent down the Cobras in 10 pitches and preserved the victory to advance to the regional semifinals.