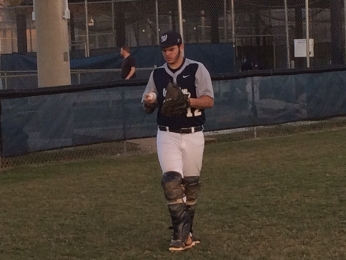 Wharton's Scotty McGuire had three hits and an RBI in the win over Robinson.

Baughman used his hard fastball to set up Robinson hitters, then came back with his breaking ball to keep the Knights off balance throughout the contest.  Of his ten strikeouts on the night, five came on third-strike curve balls.

“We didn’t really adjust to it very well,” admitted Kinghts’ manager Kevin McCray. “We haven’t seen that quality of pitching very much.”

Baughman earned the win through six innings of work, with the ten strikeouts and only two walks, one intentional.  The Knights managed only four hits and one earned run against him.

“We had some guys in scoring position tonight and we were able to drive them in,” said Wildcats’ manager James Fernandez.  “We’ve been struggling with that lately. Baughman has pitched well for us all year, keeping us in games.”

One key to the Wildcats’ victory was timely hitting with runners on base.

“I just saw it out of his hand and put a good swing on it,” Ware said of his two-RBI double in the fourth.  “If we had a dollar for every guy we’ve left on base lately, we’d be billionaires.”

“We’ve been working on getting things down, executing.”  McGuire said. “We did better tonight.”

Robinson challenged Baughman with a two-run sixth before Baughman gave way to Tyler Hathcoat in the seventh. The reliver threw a scoreless seventh to end the game.

“There was a long break in there, between the fifth and the sixth, and I think he got a little tight,” reasoned Fernandez. 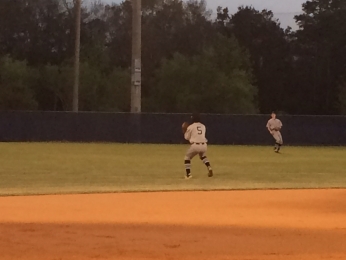 The teams were scoreless through the first three innings before Wharton exploded for three runs in the fourth. Knights’ starter Matt Steckel walked Drew Ernhard to start the inning, then gave up back-to-back singles to Clayton Coringrato and Scotty McGuire.  Aaron Guiang then hit a bouncer to short that scored Ernhard and put runners at second and third.  Zack Ware followed with a line drive double to right-field, scoring Coringrato and McGuire.  Steckel labored through the thirty-two pitch inning before being replaced by Michael Tici.

Wharton added two runs in the fifth off of Tici.  With one out, Coringrato worked a seven-pitch walk, and McGuire followed with a single to right, his second base hit of the night.  With men on first and third, Guiang came up with another RBI groundout, his second of the contest.  Ware then singled home McGuire, making the score 5-0 after five.

Robinson mounted a rally in the top of the sixth.  Killian McCray walked on four pitches, then moved to third on a single by Aaron Scott.  McCray then scored on a wild pitch, moving Scott to second.  Reliever Michael Tici then delivered an RBI single to left-center, scoring Scott.  But that would be all the Knights could muster.  Robinson threatened again in the seventh, after a towering double off the center-field wall by Matthew Chowning, but they were unable to bring him in.

“We did okay, we just had too many non-productive outs,” Fernandez said of his Knights.