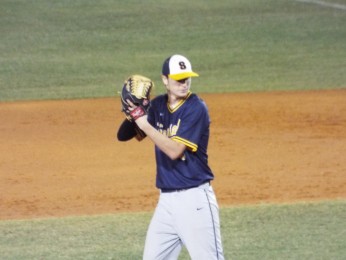 Ryan Russell was dominate on the mound for the Warriors.

It was with heavy hearts that the 36th Annual Saladino Tournament took place this year after the January passing of co-founder Bertha Saladino.

The grueling week long tournament saw both the Steinbrenner Warriors (#14 HSBN Power Rankings) and Alonso Ravens (#9 HSBN Power Rankings) win five games in the past six days just to have the opportunity to play for the championship at Don Powell Field in Brandon on Friday.

The Ravens, as the home team, jumped out to an early 4-0 lead, but the Warriors chipped away to force extra innings and in the tenth scored two runs and held on to win 6-4 and claim their first-ever Saladino title.

The Ravens (13-4) came into the game in search of their second straight title, and fifth under Manager Landy Faedo in the Saladino tournament. In the first inning, they seemed like a team destined to repeat. After the first three batters reached, Peyton Woble sent a ball into right field to bring home Ryan Mejia for the first run of the inning. Mike Paule then hit a sacrifice fly to score the Jose Cicccarello for the second run of the game. Jordan Butler and Ryan Drumheller also scored for the Ravens before the inning was over to take a 4-0 lead.

After the second inning, the momentum started to slowly shift in the direction of the Warriors (12-3) who sent Ryan Russell out to the mound in relief. Russel quickly went to work in silencing the Ravens bats that looked unstoppable through the first two innings.

Finally, in the fourth inning, the Warriors took advantage of some defensive miscues to pull themselves back into the game. After the first three batters reached base for the Warriors, an error allowed Patrick Morris to score from third. Then, during the next at-bat, with runners on the corners, a balk was called that scored Bradley Hession to cut the lead in half.

Russell remained in the game and continued to stymie the Ravens offense. The lights-out pitching allowed the Warriors to pull to within one in the sixth when Morris scored his second run of the game. Then, in the seventh with two outs, the Warriors tied the game in dramatic fashion when Anthony Cassos scored on error on the throw to first. Russell had a huge hand in helping his team get to this point and have this opportunity. 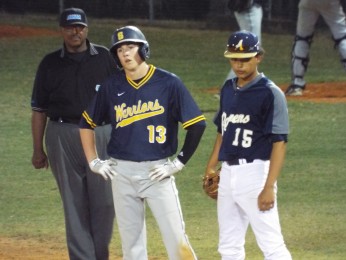 “I knew we were down four runs and I knew that I had what it took to take care of it,” said Russell. “I knew I had to come in and do my job and throw strikes and get it done. I knew the boys would have my back and hit. I knew we were going to chip away; we have been in worst situations before. So coming in I knew there was some pressure but I knew how to handle it.”

Handle it he did, going five-and-a-third innings and throwing 69 pitches, allowing just two hits, no runs and striking out five. Now with some new life in extra innings the Warriors finally broke through to take their first lead of the night.

Van Eyk relieved Russell on the mound in the eighth and returned for the bottom of the tenth to close out the game. The Warriors ace was outstanding in the tenth, striking out two of the four batters he face to secure the victory. Van Eyk struck out six batters over just under three full innings of work, and picked up his second victory of the tournament to help secure MVP honors.

“I definitely didn’t expect it,” Van Eyk of the MVP award. “I just try to do the best I can everyday out here.”

Van Eyk also added nine hits during the tournament when he wasn’t dominating on the mound to add to his MVP credentials. Now, moving into the home stretch of the season the importance of the victory means more than just a championship under their belts.

“It’s definitely a confidence booster heading into the back half of the season,” said Van Eyk. “We are going to use this as momentum going forward.” 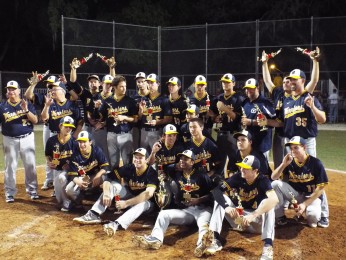 The Warriors celebrate after a championship victory.

It was a special win for the team, not only winning a championship against a team that handed them their worst loss of the season, but also because the victory was the 700th in the long career of Manager John Crumbley, which makes the win that much sweater. When the team was down by four runs, Crumbley stressed patience to his team.

“We preach from day one, seven innings, three strikes, three outs,” said Crumbley “Lets just minimize the damage and put pressure on people. We let a lot of opportunities pass us by. In all of our extra inning and late heroic games our players didn’t panic and they came through.”

They certainly came through for their skipper this time. There were many factors in the Warriors’ thrilling comeback victory, from great pitching to timely hitting. But the most important factor in their victory could be heard from before the first pitch until after the closing ceremonies and that was the Warriors battle cry.

“Oh my gosh, when I joined varsity freshman year I knew about the ‘Skeebo’ chant, they were all doing it,” Russell said. “Honestly, there is no meaning behind this word. We just say it and we have this hand signal everyone does. Its indescribable but it brings the team together and the chemistry is off the chain.”