Shorecrest Shuts Out St. Petersburg Catholic In 3A-5 Bout 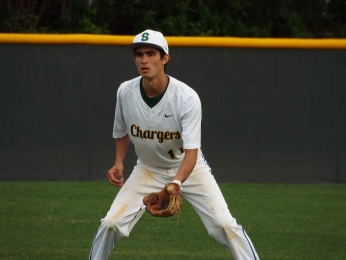 Louie Steffens was a defensive star in the victory against the Barons.

Hernandez Family Field was the site of an important 3A-5 match-up Thursday between the Shorecrest Prep Chargers and the visiting St. Petersburg Catholic Barons. The Chargers came into the game hot, having scored 10 runs in their previous game, and wasted no time picking up where they left off. Behind a punishing offense and stellar pitching, the Chargers shut out the Barons 8-0 to secure their fourth district victory.

Shorecrest (5-3, 4-2) came into Thursday’s action having lost three of their last five games but looked to build momentum from its 10-6 win just a few days ago. Cole Estes got things going for the Chargers with his sacrifice fly in the bottom of the first. The ball was hit hard and deep enough to center-field to score Kai Boralt from third to give the Chargers the 1-0 lead.

One inning later, the Chargers’ batters struck again. Ben Pearson led the inning off with a line-drive into the outfield for a single. Pearson moved into scoring position two batters later with a steal of second, the first of his four on the afternoon. Pearson scored the first run of the inning on an infield hit by outfielder Will Lovelace, who scored later in the inning to increase the Chargers’ lead to three.

They added two more before the inning was over to take a 5-0 lead into the third.

It was a tough day overall for Barons (3-6, 3-4), who fell to under .500 within the district. Ben Buckley got the start for the Barons and went three innings, striking out four, but could not slow down the hitters and base-runners for the Chargers. Defensive miscues were a huge factor in the outcome and manager Ron Rhoads knew they gave the Chargers too many gifts. 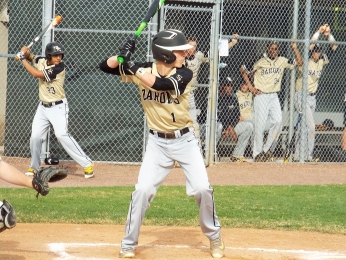 Bailey Brooks went 2-for-3 with two stolen bases on the afternoon.

“We can’t take any team for granted,” said Rhoads. “We have to go out there and play fundamentally better than what we are. We are a young team but that doesn’t mean we cant make the plays. That’s what we got to work on and not let a game like this get us down and just focus on finishing out the rest of the season strong.”

Sophomore Baily Brooks played well for the Barons, making good, hard contact on many of the balls he put in play. Brooks went 2-for-3 with a stolen base on the afternoon. Tyler Boensch pitched a strong seventh inning for the Chargers, striking out one and not allowing a hit.

Cai Baralt got the start for the Chargers and was strong through six innings of work. Boralt threw 79 pitches, allowing just five hits and striking out four batters. Baralt consistently started ahead in the count, throwing 75% of his first pitches for strikes to help keep the Barons on their toes.

Manager Kevin Datolla, who is in his first year as Chargers skipper, was not surprised by the performance his starter gave him.

“Cai threw the ball really well today,” said Datolla. “He’s thrown really well for us all year so really its about playing well defensively and throwing strikes. When we can do that good things can happen.”

Good things came in the form of great defense from shortstop Louie Steffens in the fourth inning. Steffens made an outstanding diving catch over his teammate in shallow left-field and, despite getting banged up on the play, was able to throw to first baseman Tommy Murphy for the double play. It took Steffens a minute to gather himself but he rebounded and made another outstanding play in the fifth.

“Adrenaline kicked in and took over,” Steffens said. “I was not expecting to get hit in the leg, it was a nice treat from our freshman left-fielder. It took me a little while to get up but I recovered and got back in the game.” 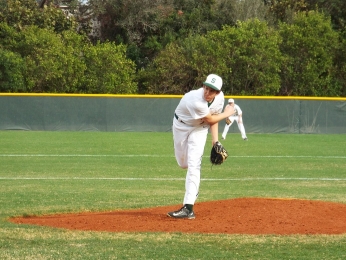 Starter Kai Boralt delivers a pitch in the third inning.

The Chargers offense added three more runs in the final three innings, but it was the defense and base running that set the tone early and often in this game. The Chargers as a team stole seven bases, including a couple perfectly-executed double steals, most of which led to runs. Datolla stresses the importance of playing smart on the base paths and playing sound defense.

“We’ve been just trying to take of the little things,” Datolla said. “That’s what we have been trying to stress ever since we had that bad little streak. We weren’t really hitting, we weren’t playing defense, so it was good to see them come out today and take advantage of the opportunities that were given. We are just trying to get consistent.”

With the game in hand entering the seventh, Boralt took a seat and Josh Cooper came in to secure the victory. Cooper made quick work of the Barons, not allowing a hit to preserve the shutout and the 3A-5 victory for the Chargers.